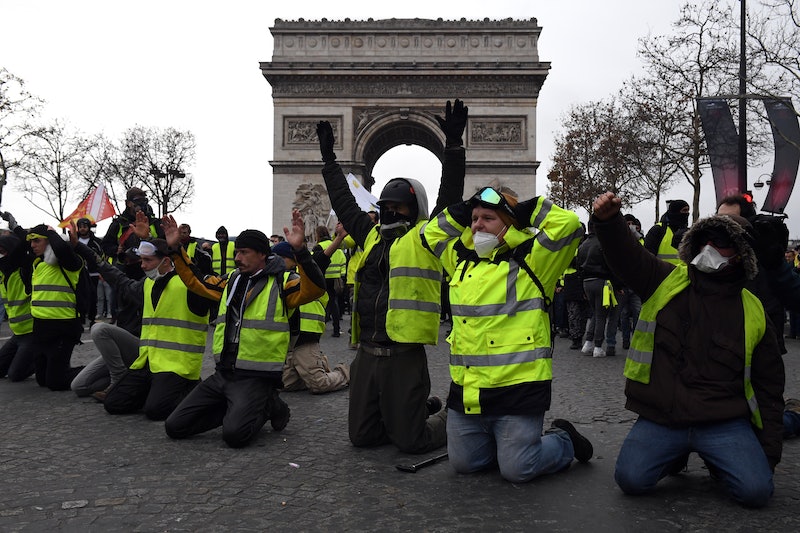 On Saturday morning, President Donald Trump said French protestors were chanting his name — but his sources weren't exactly reliable. Trump, in talking about the protestors who are against a fuel tax hike in France, erroneously claimed that another video of protesters chanting his name in London was from the Paris demonstrations. The Yellow Jackets is a name taken from the neon yellow jackets French motorists must keep in their vehicles. They have been protesting tax increases since Nov. 17, but are now protesting the government of French President Emmanuel Macron.

“The Paris Agreement isn’t working out so well for Paris. Protests and riots all over France. People do not want to pay large sums of money, much to third world countries (that are questionably run), in order to maybe protect the environment,” Trump tweeted on Saturday morning. “Chanting ‘We Want Trump!’ Love France.”

However, the rumor about protestors chanting Trump's name reportedly came from a QAnon conspiracy social media channel, according to Matthew Gertz, senior fellow of Media Matters for America. "French protestors have not been chanting 'We Want Trump,'" Gertz wrote on Twitter on Saturday morning shortly after Trump tweeted. "The false claim moved through Trump social media based on a QAnon supporter's video that actually shows such chants from a June rally in the UK held in support of far-right extremist Tommy Robinson."

Gertz traced the video for Media Matters For America to a tweet from a "pro-QAnon Twitter account" that claimed to have filmed protesters in Europe. Later in the day, another Twitter account reposted the video and added the claim that the protesters were in France. The video — and its erroneous French origins — spread through Reddit, 4chan, Facebook, numerous right-wing websites, and on Rush Limbaugh's radio show by Dec. 3.

On Dec. 4, Trump retweeted a tweet from conservative activist Charlie Kirk again claiming that protesters in Paris were chanting about the American president. "There are riots in socialist France because of radical leftist fuel taxes Media barely mentioning thisAmerica is booming, Europe is burning They want to cover up the middle class rebellion against cultural Marxism 'We want Trump' being chanted through the streets of Paris," Kirk claimed.

The protests started as a response to the proposed fuel tax increases by Macron's government. The protests have since morphed to broader demonstrations against the Macron government. Protesters have told media that Macron's policies are only helping the rich, instead of helping the poor. (Macron was called "president of the rich" after he took office in 2017.) The BBC reported that 500 people were taken into custody following the protests in Paris, which left 30 people injured.