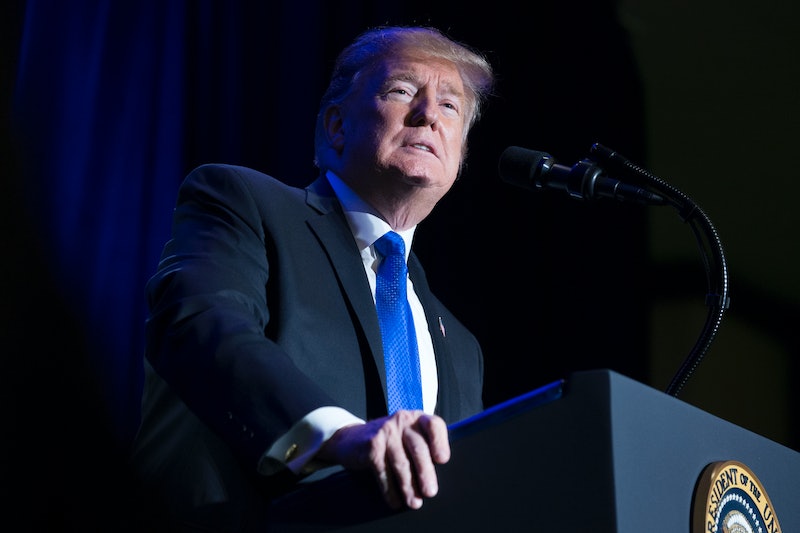 In a comment that left observers scratching their heads, it seemed like President Trump suggested his immigration policy is "hurting people" while addressing reporters from the White House on Thursday. In response to a question about the policies he's enacted as president, Trump said they're accomplishing "the reverse of what they're supposed to be doing."

Some speculated that Trump became confused about what he was discussing midway through his sentence, and unwittingly began talking about older immigration policies that he opposes. Bustle has reached out to the White House for clarification on what the president meant.

"Are your immigration policies cruel?" a reporter asked Trump while he was taking questions from the Oval office.

Trump then shifted gears, praising his administration's handling of immigration and discussing the then-upcoming Senate vote on his national emergency declaration.

“I think we’re doing an incredible job,” Trump said. “We’re apprehending record numbers of people. But if we had border security and we had the wall — if we had a proper wall, which we’re building now as we speak. And we’re getting a lot more funding for it, as you know, in what we’re talking about, and the vote today. Whether it’s positive or not, I’m vetoing it."

In 2018, border apprehensions hit a six-year high, according to Pew Research. However, they were still far lower than the number of apprehensions in the 1980s, 1990s, and 2000s, Pew reports.

Trump's comment about "the vote today" was a reference to a Senate resolution expressing disapproval of his recent national emergency declaration.

Trump has long advocated for a U.S.-Mexico border wall, and during his presidency, some existing fencing along the U.S.-Mexico border has been reinforced. But Congress has been unwilling to fund any new wall, other than a small allocation in 2018 that covered 33 miles, or less than 2 percent, of the U.S-Mexico border.

In February, Trump declared a national emergency at the U.S.-Mexico border, and claimed that doing so will allow him to free up funds to construct a wall. But on Thursday, the Senate voted in disapproval of Trump's declaration, with 12 Republicans joining all Senate Democrats to pass the resolution.

After the vote, the president indicated on Twitter that he'll veto the Senate bill, which passed the House of Representatives last month. It will be the first veto of his presidency.

Trump has adopted or proposed many hard-line immigration stances, including separating immigrant families at the border, banning citizens from several Muslim-majority countries from entering the United States, reducing the amount of legal immigration to America, and limiting asylum eligibility for migrants. These proposals have been met with protests, international condemnation, and many court challenges.