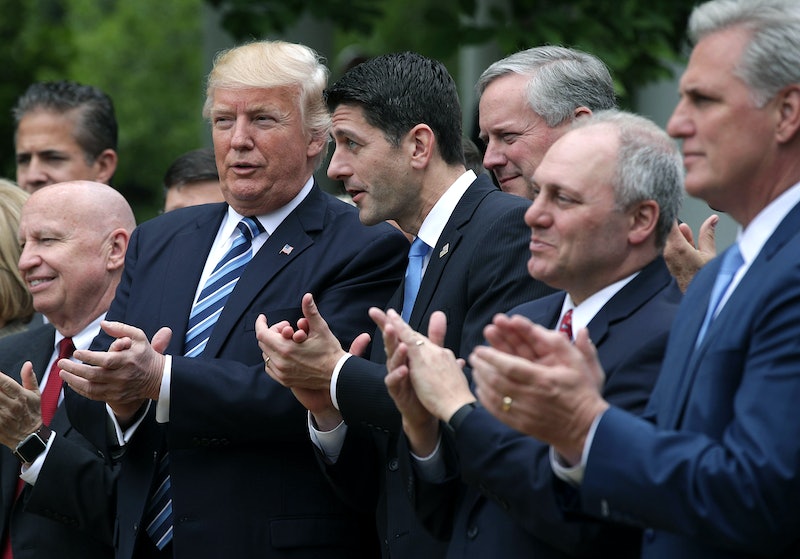 In the midst of what is perhaps the most scandal-plagued week of Donald Trump's young but already scandal-plagued presidency, discussion in Washington, D.C. has actually turned to the rarest and most serious ideas: impeachment of the president. The logic among those pushing for removal from office is that not only has the president allegedly engaged in possible obstruction of justice, but that his behavior will not get better, the scandals will not go away, the Republican legislative agenda is comatose, and that many conservatives would prefer Mike Pence be president, anyway. Republican politicians, after having spent the past few months defending the president, seem to be breaking with him. The idea of getting Trump out, and doing it as quickly as possible, is being floated with a seriousness it certainly wasn't for former Presidents George W. Bush and Barack Obama.

But all the chatter and spilled ink still may underrate the seriousness of impeachment. It's only been attempted twice in American history (for presidents Andrew Johnson and Bill Clinton), failing both times, and Richard Nixon resigned rather than face impeachment proceedings he was unlikely to survive.

"If anybody were to make a move, to either use the 25th Amendment, or to use impeachment, to remove Trump from office, it would be immediately seen as a coup by the establishment," says Evan Siegfried, a Republican strategist who is the author of GOP GPS: How to Find the Millennials and Urban Voters the Republican Party Needs to Survive and has opposed Trump since the primaries.

"I think the bulk of them will be threatening to leave the Republican Party," retired Colonel Rob Maness, head of Gator PAC, a grassroots group supporting outsider conservative candidates, which organized to help Trump during the campaign, tells Bustle of Trump's most avid supporters. "I'm already starting to hear some rumblings."

"They lived through eight years of the Republican Party refusing to even discuss impeachment of President Obama..."

In Maness' view, many of Trump's most die-hard fans like him for the way he took on the Republican establishment, and would be furious if that establishment took Trump down.

"They lived through eight years of the Republican party refusing to even discuss impeachment of President Obama, and he did some things, in the opinion of the folks out away from the coast lines, that deserved at least investigation from a lot of our perspectives," Maness says. "So, I think the party's going to really hurt itself if they go that direction without a very, very solid factual reason to do it."

It's hard to imagine a situation that would rise to that for Trump's most fervent base of supporters.

"The Trump base is not in any way, shape or form primed to believe what is going on with Trump," Siegfried says. "They have categorically rejected what news has come out, and that's a big problem for anybody who's trying to do anything."

"It might be a healthy thing for the long-term sustainability of the party if the Republican Party had a moment of soul-searching in such a situation."

Of course, as Siegfried points out, "That's great for Trump, in that his base is still with him, but they will not accept reality of the situation, and they think it's made up by the press, and the press did this for the sole purpose of going to war with Trump."

"It would be asking Republicans to deal their party brand a wound from which it would take a long long time to recover," Paul Musgrave, an assistant professor of political science at the University of Massachusetts-Amherst, tells to Bustle, explaining why impeachment is such a long shot. "You'd have to do this on the basis of reports and evidence that now for months Republicans and the right-wing media have been saying are easily dismissed."

According to Maness, many Trump supporters might not be inclined to keep supporting the Republican Party if it turned on Trump. "I would say 2018 would be a loss," Maness says.

"That moment of soul-searching might produce a way for Republicans to say, 'This is about honesty and integrity in government, the rule of law, and doing the right thing even when it's difficult."

However, to Siegfried, with Trump in office, there are worse things that could happen to the Republican Party than losing control of Congress in the 2018 elections. "It might be a healthy thing for the long-term sustainability of the party if the Republican Party had a moment of soul-searching in such a situation," Siegfried says.

He sees a big change for the Republican Party as close to inevitable, even if he can't say when.

"That moment of soul-searching might produce a way for Republicans to say, 'This is about honesty and integrity in government, the rule of law, and doing the right thing even when it's difficult,'" Siegfried says. "And if the voters don't want a party that represents honesty, integrity, and adherence to the rule of law, then it's not a problem with the Republican Party and it's values. It's a problem with the voters and their values."