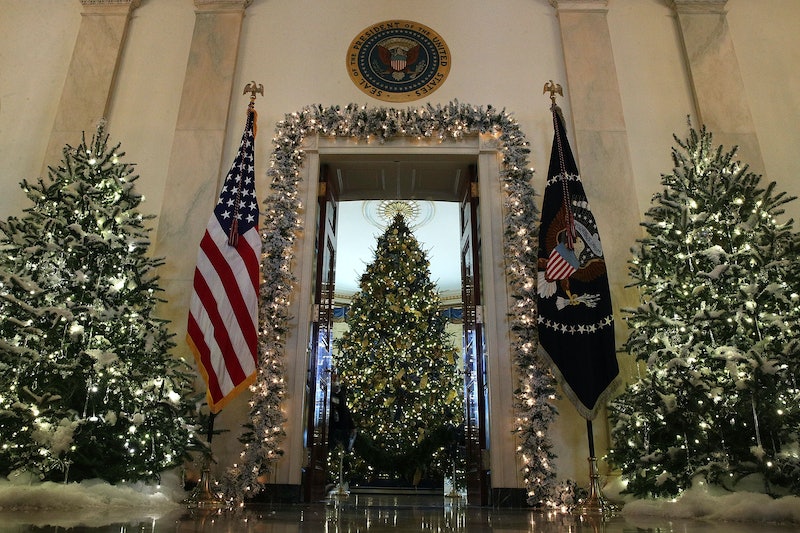 Despite all of the hand-wringing on Fox News, there has never been a liberal "War on Christmas." Christmas-celebrating liberals and conservatives alike have, and will, continue celebrating Christmas like they always have, even if some people attempt to ring in the season in a more inclusive way. This is why Trump winning the "War on Christmas" is bad news for literally every other religion — or group lacking one — in America.

This year's White House Christmas decorations are heavy on the nativity scenes, with plenty of red, green, and gold, and countless trees decking the halls. The Trump family Christmas card features the phrase "A Merry Christmas and Happy New Year" rather than "Happy Holidays," which Trump has railed against as being too politically correct.

During the campaign, Trump promised that "Merry Christmas" would start coming back to department stores. And in December 2016, former Trump campaign manager Corey Lewandowski said that "You can say again, 'Merry Christmas', because Donald Trump is now the president."

But those decrying "Happy Holidays" as a presumed attack on their faith have gotten it all wrong. Don't think of that greeting as a shot fired in the "War on Christmas" — instead, look at it as increased recognition for the sizable group of Americans that doesn't celebrate Christmas. So, if Trump's truly winning this so-called war, it means that all of those people are losing.

Many of the biggest social issues in the American political environment boil down to some conservative Christians' failure to recognize that separation of church and state enshrined in the U.S. Constitution isn't an attack on their religion. In fact, it allows other people of religions, and people who don't subscribe to certain strains of Christianity, flourish and live their lives alongside Christians.

Take the issues of gay marriage or abortion, the latter of which is apparently important enough that an alleged pedophile who's vowed to fight its legality still holds the majority of evangelical support in the Alabama Senate race (Roy Moore has denied all allegations of sexual misconduct). But a same-sex couple's ability to obtain a marriage license or a woman's ability to obtain an abortion does not translate to the government forcing gay marriage or abortion on anyone. They're simply available to those who want them, those who've apparently decided that their religious beliefs don't prevent them from getting an abortion or marrying a person of the same sex. They're constitutional rights, but also issues of inclusivity.

Of course, evangelical conservatives who rallied around Trump, perhaps in part because of his promises to reinstate Christmas, do not represent all Christians. But there are enough of them that we're still having a national debate about gay marriage and abortion — and we're still seeing chatter about a "war on Christmas."

Trump apparently "vowed to put the Christ back into Christmas," to fight against the secularists who want to — gasp! — include people in their holiday greetings who don't believe that Christ was the messiah. But unlike abortion and gay marriage, this is a matter of inclusivity, not constitutional rights.

Christians still represent over 70 percent of the U.S. population, and some of that remaining 30 percent — people of other faiths or who claim no specific religion — celebrate Christmas in a more secular way. They're allowed to do that, since they live in a country where freedom of religion is guaranteed. Approximately 6 percent of Americans subscribe to a faith that is not Christianity: these people include Jews, Buddhists, Hindus, and Trump's favorite group to disparage, Muslims.

Six percent of a country of 320 million people comes out to over 19 million people. When one of those 19 million hears the phrase "Merry Christmas" directed at them, at best they consider it a kind greeting. But at worst, that greeting may make them feel excluded, marginalized, or like their identity's been denied. I say this from personal experience: as a Jew who grew up in the Bible Belt, I remember that feeling. I've since stopped responding negatively to being told "Merry Christmas," but as a kid, I felt like it wasn't meant for me. "But I'm not Christian," I always wanted to say. "You don't mean to say that to me."

It's not only for the overly sensitive (and overly literal) Jewish children that liberals try to project a spirit of inclusivity by using a greeting that allows people to read into it what they will. "Happy Holidays" or "Seasons Greetings" don't not mean "Merry Christmas." Instead, they also mean "Happy Hanukkah," "Happy New Year," "Happy Kwanzaa," and anything else that someone might conceivably celebrate in December. Despite what Trump's obsession with saying "Merry Christmas" may suggest, inclusivity is a good thing.

The holiday season is a time to spread love, to appreciate your family and your loved ones, to look forward to the future, and to appreciate the past. It's a season for everyone, and the lit-up streets and mulled wine and well wishes are for everyone, not just those who subscribe to the Christian religion. Claiming that there's a war on Christmas — and then claiming to win it — also implies that this season belongs only to Christians. And that is an outgrowth of the belief that America belongs only to Christians. Neither of those things are true.