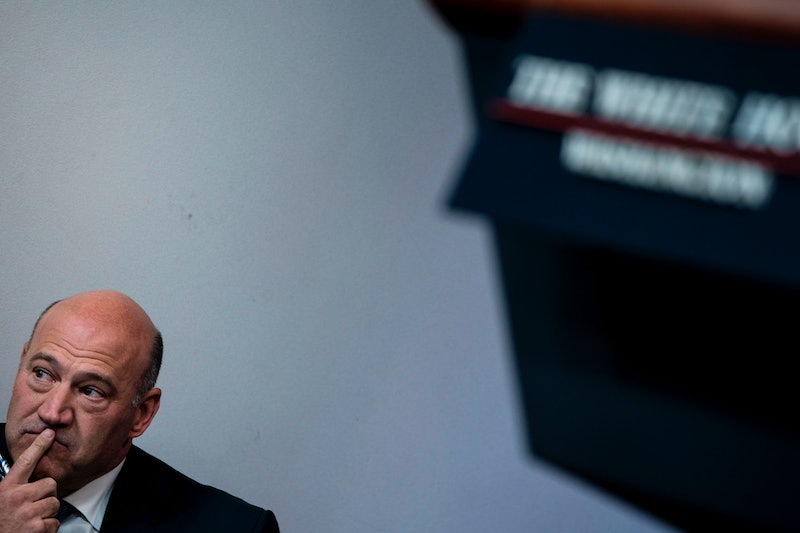 You wouldn't necessarily expect the men who designed a tax plan that will largely benefit only the richest people in America to be in touch with the life situations that the rest of the country faces on a regular basis, but this example is truly egregious. Gary Cohn, Trump's economic adviser, thinks Americans can buy a car with $1,000. It's also necessary to note that Cohn was one of the six white men who designed the tax plan behind closed doors — and he's worth an estimated $266 million.

He made this pronouncement as part of his effort to sell the tax plan as a huge boon for the middle class, which it objectively is not. The tax plan will offer the greatest tax cuts to America's wealthiest individuals and to corporations, with only minor benefits trickling down to the middle class, and the lowest income Americans seeing absolutely no change. Just based on the Trump tax returns that went public earlier this year, experts guess that Trump himself could save up to $1 billion if this tax reform was to go into effect.

At this White House press briefing, though, Cohn was talking about the little people — specifically, about the kind of middle class family that earns an average of $100,000 a year and who has two kids. Those people can expect to see an extra $1,000 in their accounts thanks to this tax reform. Not exactly the millions that people like Cohn can expect to see, but unsurprisingly mentioning that wasn't the tactic that he used to try to sell the idea.

“If we allow a family to keep another thousand dollars of their income, what does that mean?” Cohn said. “They can renovate their kitchen. They can buy a new car. They can take a family vacation. They can increase their lifestyle.”

Considering that a new stove is going to cost at least $400, that's not much of a kitchen renovation. A quick look also reveals that even that most sensible of cars, the Honda Civic, will cost well over $15,000 if you buy it new. You might be able to find a car for close to $1,000 on Craigslist — if you're willing to buy a car from 1999. There's a 2002 Mitsubishi Eclipse available for $700 in New York — but it's missing an engine. Not exactly the best options, but then again, $1,000 isn't the best tax cut — at least not when the very upper crust will be benefiting so much more.

Given how completely out of touch this comment was, Cohn clearly doesn't have to concern himself with how much things actually cost. This is hardly the first time that a member of the Trump administration or a Republican member of Congress has made a tone-deaf comment like this during the past eight months, either. Remember the time when Rep. Jason Chaffetz made the ridiculous claim that Americans without health insurance just had to think a little harder about whether they wanted health care or that new iPhone, even though the average health care costs for a year would run you about 26 new iPhones?

Trump and his surrogates are trying to sell a tax reform plan that simply doesn't exist. The president has made promises about how the plan will create jobs and revenue for "everyday American workers," but analysts looking at the few details that they've already provided agree that this is unlikely. For the few middle class Americans who are interested in investing in broken-down Mitsubishis and installing new engines, this is a real boon. And for the rest of the country that doesn't count themselves among the ultra-rich, it likely won't be much help at all.