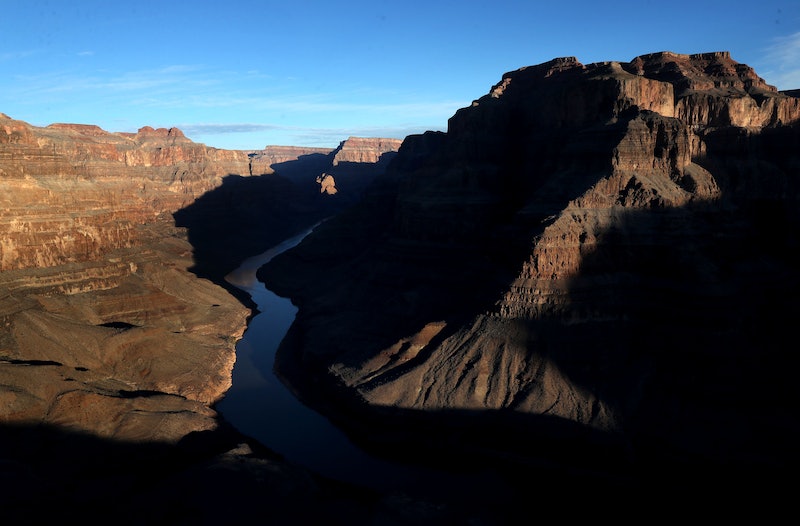 Air Force One flyovers, tanks in the street, clean-up after massive fireworks displays — these things don't come cheap, but they're all going to be parts of President Donald Trump's Fourth of July event, to be held in Washington D.C. on the National Mall. While White House officials have been reticent to confirm exactly how much taxpayers are on the hook for with this event, one thing is clear — the cost of Trump's Salute to America event is so big that it's taking money away from that most beloved of American institutions: the national parks.

Specifically, the National Park Service (NPS) is sending about $2.5 million in park funds to cover its part of the event, The Washington Post reported. This money, according to The Post, comes from fees that people pay to enter the parks and use their services, and it would normally go to pay for park upkeep. And at the moment, the NPS is running an $11 billion backlog in maintenance costs, according to Newsweek. Bustle has reached out to the NPS and the White House for comment.

Overall, though, the $2.5 million that the NPS is supplying will amount to just a small fraction of the entire cost of Trump's July 4 event.

Even without a White House statement on the full cost of the Salute to America event, though, it's clear that taxpayers are going to be footing a hefty bill, according to NPR. The military displays alone, including the tanks, flyover, and military band performances, will reach into the millions of dollars. While The Washington Post reported that the fireworks displays — valued at $750,000 — were donated by pyrotechnic companies, the NPS will have to pay its employees overtime to clean up after those displays.

“This is a breach of trust with the public,” National Parks Conservation Association President and CEO Theresa Pierno told The Post. “The public pays parks fees to fix national parks and for educational programs, not the president’s parade.”

While Fourth of July celebrations in the nation's capital are a longstanding tradition, critics fear that rather than going toward a nonpartisan celebration of America, this time the federal funds will actually go toward something more like a campaign rally.

Part of the backing for that fear is the fact that the RNC is giving out VIP tickets to major donors, according to HuffPost. When asked about this report, a spokesperson for the RNC told The Washington Post that it was "standard practice" for the RNC to receive and then distribute tickets to events like these. A White House official then told HuffPost that Trump would not give a political speech.

"It will be about celebrating our nation’s independence, our flag and our great military,” the anonymous official said.

The military will certainly play a big role, what with the tanks being shipped all the way up from Georgia, according to The Washington Post. But beyond that, the event could still offer some surprises. If Trump — not a president known for working to bridge the political divide in America — were to keep things non-political, that would be one of them.