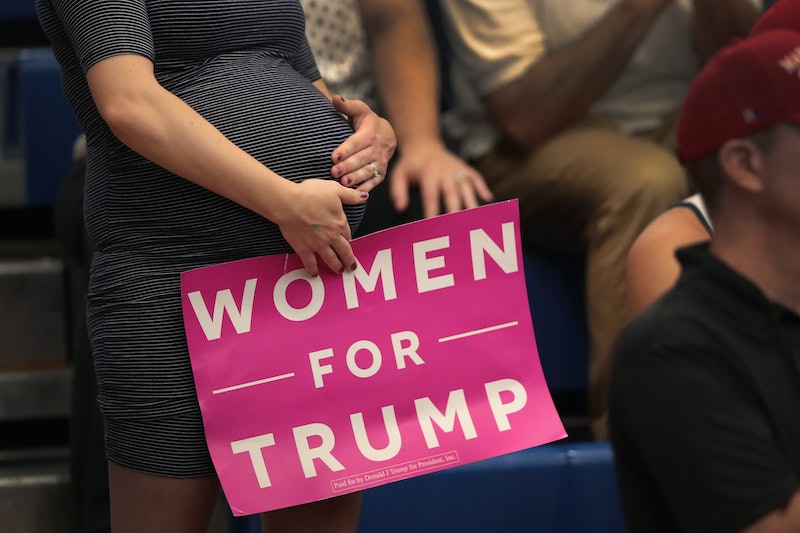 Just one week out from election day, the president's reelection campaign is zeroing in on a voting bloc that Republicans currently aren't tracking very well with, according to polls. In a one-minute clip depicting a suburban white mother caring for her daughter, President Trump's new midterms ad campaign video targets women in a very specific way, suggesting that they need to vote Republican in order to secure their children's economic futures.

In the ad, the mother appears unsure about who she should vote for in the upcoming midterms, though while she takes care of her daughter, she is subjected to pro-Republican messaging. For example, while getting her daughter out the door for school, a television in the family living room shows a news report whose chyron claims that unemployment is the lowest it has been in 18 years.

Later, she is driving past a pro-Republican yard sign while a voice coming from her car radio says, "We can't get distracted from the biggest issues, which are jobs and our kids' future." She then glances at her daughter, who is sitting in the back seat.

The general message from the ad is that the economy has improved since Trump took office, and that if Republicans lose their elections, that progress could be undone. President Trump is not mentioned in the video at all.

It's not clear from the video whether the mother has a college degree, though her suburban neighborhood suggests that this might be the case. In a tweet earlier this month, Trump claimed that college educated women will vote for him because they "want safety, security and healthcare protections" as well as "financial and economic health."

In focusing on the economy, Trump's new midterms ad avoids other, more controversial topics that have forced the Republican party to grapple with uncomfortable questions in recent months. Though the president continues to publicly rail against immigration, and while Republican-backed legislation challenging access to abortion care continues to pop up in red states, the Trump campaign has asked women to stick with them because of a strong economy.

Trump's ad suggests that if mothers help vote Republicans into office, their daughters, like the one in the ad, will be have greater career options. The daughter in the ad, after her mother is seen voting for a Republican in the ballot box, transforms from a child who takes music lessons and into an adult professional musician, for example. The ad does not make clear exactly what impact the Republican candidate featured on the fictional ballot actually had on the daughter.

The Trump campaign plans to spend $6 million toward airing the ad on multiple platforms, including cable, according to NBC News. As the highly anticipated midterms draw nearer, Trump's attempt to reel in women voters for the Republican party will join the chorus of political ads already on television.