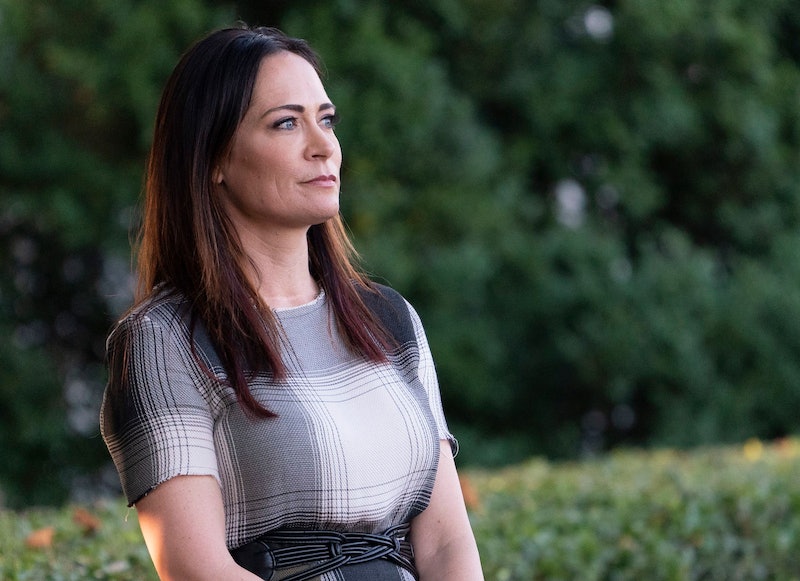 The White House announced that Sarah Huckabee Sanders was stepping down earlier in June, and on Tuesday, Melania Trump announced that the new White House press secretary is Stephanie Grisham, who has been serving as the first lady's spokeswoman.

In the same style as her husband, the first lady announced Grisham's new position in a tweet.

"I am pleased to announce @StephGrisham45 will be the next @PressSec & Comms Director!" Trump wrote in a tweet on Tuesday morning. "She has been with us since 2015 - @potus & I can think of no better person to serve the Administration & our country. Excited to have Stephanie working for both sides of the @WhiteHouse. #BeBest"

Bustle has reached out to Grisham for comment. In her tweet, Trump seems to announcing that Grisham will actually have three different roles — White House press secretary, White House communications director, and spokesperson to the first lady, though Grisham has not confirmed this to Bustle.

While President Donald Trump previously just told The Hill that there were "four or five people that really want" the job of White House press secretary when Sanders vacates the post at the end of June, he didn't mention any names specifically. The Hill, however, reported that Grisham was one of those under consideration.

Grisham joined Melania Trump's team in March 2017, according to CNBC. As CNN reported, though, Grisham joined the Trump orbit in 2015, when she began working with then-candidate Donald's campaign as the traveling press director. CNN wrote that she joined the White House staff right from the beginning, serving as the deputy press secretary while Sean Spicer held the top job. This was where she met the first lady, and she switched over to the East Wing in February 2017, per CNN.

“During the campaign she developed a good relationship with the president, and that’s carried through,” Sanders told The Washington Post of Grisham in late 2018. “She has developed a great amount of trust from both the president and the first lady, which is a pretty high commodity here. There aren’t a lot of people who have a lot of regular interaction with both of them.”

In one of the more memorable episodes in her tenure with the Trumps, Grisham even reportedly played a significant role in getting Mira Ricardel fired from her role as deputy national security adviser, according to The Washington Post. After Ricardel and the first lady's staff reportedly didn't get along on Trump's first trip abroad to Africa, Grisham tried several avenues to have Ricardel removed — going first to then-White House Chief of Staff John Kelly, having Trump speak directly to the president, and then taking matters into her own hands, as The Post described.

Without warning the West Wing, Grisham issued a statement saying, "It is the position of the Office of the First Lady that she no longer deserves the honor of serving in this White House,” as Reuters reported at the time, in November 2018. Ricardel left the White House soon after, according to The Washington Post. While this sort of behavior from the spokesperson of a first lady is unusual, as The New York Times wrote, it has evidently helped Grisham earn and keep the trust of the president and the first lady.