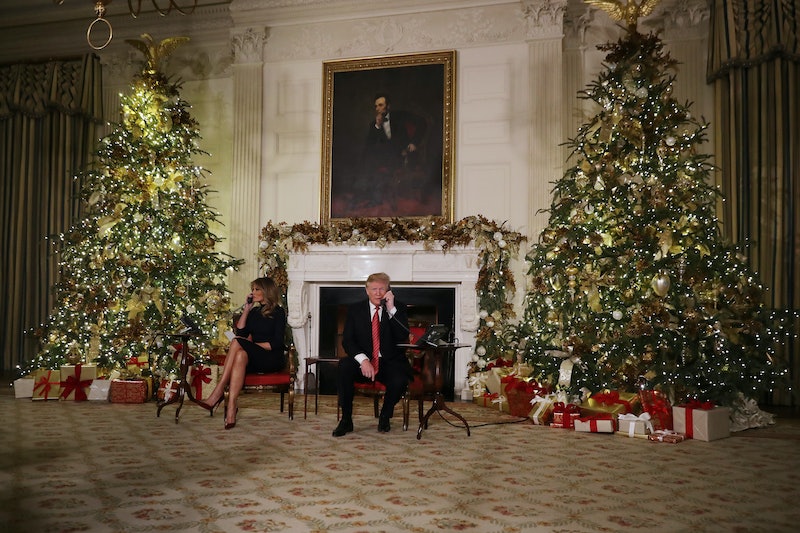 The year is blessedly almost concluded. But as the government shutdown is still in effect, there's a more intense spotlight on President Donald Trump's holiday plans at his Mar-a-Lago resort. Because of the costs of the Florida party, let's compare Trump and Obama's New Year's Eve activities, but the criticism facing Trump is pretty unique when compared to Obama.

Both men released holiday messages along with their wives to the American public. (Obama and former First Lady Michelle Obama's first message from 2009 is below.) However, how the two men spent the New Year is remarkably different.

In 2016, Obama spent a part of New Year's eve playing golf with friends at a course on Oahu, according to the Associated Press. By comparison, then-President-elect Donald Trump threw a massive party at Mar-a-Lago with entrance fees ranging from $525 to $575 per person, according to CNN. The party included cocktails, dinner and dancing, according to then-incoming press secretary Sean Spicer.

This year, the Tribune News Service reported that club members will pay $650 for a ticket to the annual event, compared to the $600 ticket purchased by members in 2017. Guests of the club members will pay $1,000 for next week’s event, while in 2017, guests paid $650 for a ticket. The $1,000 price tag doesn’t include the 27 percent fees for gratuity and tax, according to the wire service.

For this year's bash at Mar-a-Lago, Quartz reported that taxpayers will be responsible for at least $54,000 for tents to be used by the Secret Service during the party. The Secret Service paid Grimes Events & Party Tents Inc. in Florida $54,020 for the tent rentals, according to data from U.S. Spending.

Despite the price tags for both the American taxpayers and attendees, Trump will not be attending the celebration, according to the Palm Beach Post. It's unclear if the resort will let people return or refund tickets this close to the event, but Palm Beach Post reporters Alexandra Clough and Antonio Fins wrote that some ticket holders might skip the party because Trump won't be there.

Office of Management and Budget Director Mick Mulvaney told Fox & Friends on Friday that Trump's absence is related to the shutdown.

Mulvaney — who will become the acting chief of staff at the end of the year — said Trump is working over the holiday. Trump is "very heavily engaged on [negotiations related to the government shutdown] on a minute-by-minute basis," Mulvaney told Fox & Friends.

Similarly, at the end of 2013 Obama still went on the annual family vacation to Hawaii after the botched health care law roll-out. The 2013 Obama family vacation cost at least $8 million in taxpayer dollars for security, flights, and rentals, among other costs, according to conservative governmental spending watchdog group Judicial Watch.

The holiday remained otherwise low-key while in Hawaii. During the 2013 vacation, Obama worked out at the military base, went snorkeling with his family, and got shaved ice, according to the Associated Press.

While Obama became more celebrity- and party-friendly as his presidency continued, his New Year's eve celebrations remained understated while he was in office, unlike Trump.