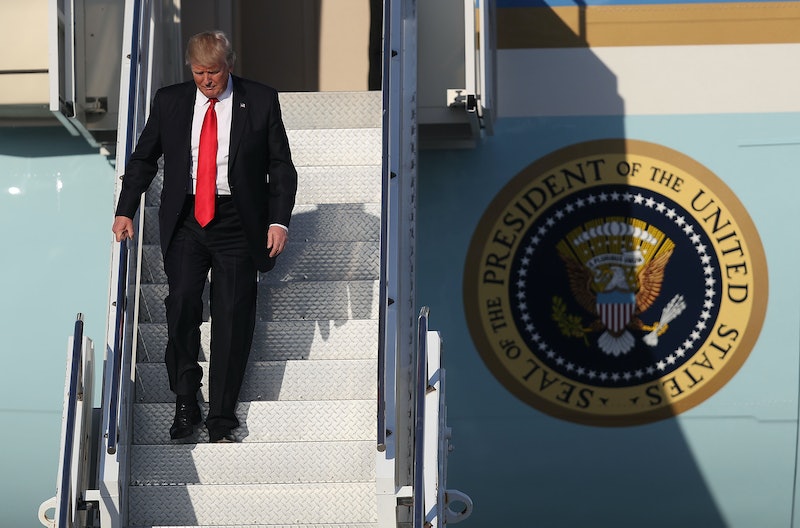 This must have been an enlightening and edifying weekend for the Trump administration — in all the wrong ways. The primary setback, of course, was how the travel ban suffered a second defeat in court, this time at the hands of a federal appeals court. Whenever it comes, Donald Trump's reaction to the appeals court decision will be revelatory. So far, his tweets about how the travel ban has fared in court haven't shown a great deal of respect for how the judicial branch of the government works. Now that the judiciary has thrown up yet another road block for his agenda, it seems unlikely that his reaction will change significantly.

The weekend started badly for President Trump, when a judge in Seattle issued an order temporarily barring anyone from enforcing the travel ban, which stated that citizens of seven predominantly Muslim countries could not enter the U.S. Trump lashed out on Twitter, calling the judge's decision "terrible" and "ridiculous". The Justice Department then filed a request with a federal appeals court to reinstate the travel ban — but the federal appeals court denied it. Thanks to their refusal to immediately put the ban back into effect, citizens from previously banned countries will now be able to enter the country through previously normal immigration channels until at least Monday.

Whereas Trump's reactions on Twitter to the events so far have been predictably explosive, the words from his surrogates in the Justice Department and elsewhere have been only marginally less so — even couched as they were in legal language. Acting Solicitor General Noel Francisco, for example, stated that

"Judicial second-guessing of the President’s determination that a temporary suspension of entry of certain classes of aliens was necessary at this time to protect national security would constitute an impermissible intrusion on the political branches’ plenary constitutional authority over foreign affairs, national security, and immigration."

Confusing though that statement is for someone who's not so used to legalese, the point is a simple one. It's essentially a repetition of what Trump himself has been saying: the judiciary should not be allowed to interfere when the president has issued an order.

The role of the judicial branch, of course, is to determine whether laws are constitutional, and orders made by the executive branch are not exempt from this cycle. It's a pretty key part of the democratic process. Trump's tweets on the matter, reactionary and based on made-up facts and fear-mongering, reveal his lack of respect for the process.

Although he has not yet issued any sort of reaction, official or otherwise, on this latest decision from the federal appeals court, it would be a huge surprise if he were to change his tone and instead express any level of respect for the court's decision. So far, his take on the matter has shown that he seems to think that he can act in a vacuum, without being subject to the same scrutiny that the rest of the system receives. In this case, an alternative fact is coming into direct conflict with a real one — and if the last year or so has revealed anything to be true, it's that the new president doesn't like it when his authority is questioned. It's the democratic system that gives him his authority, however — so he might want to start giving it just a little bit more credit.