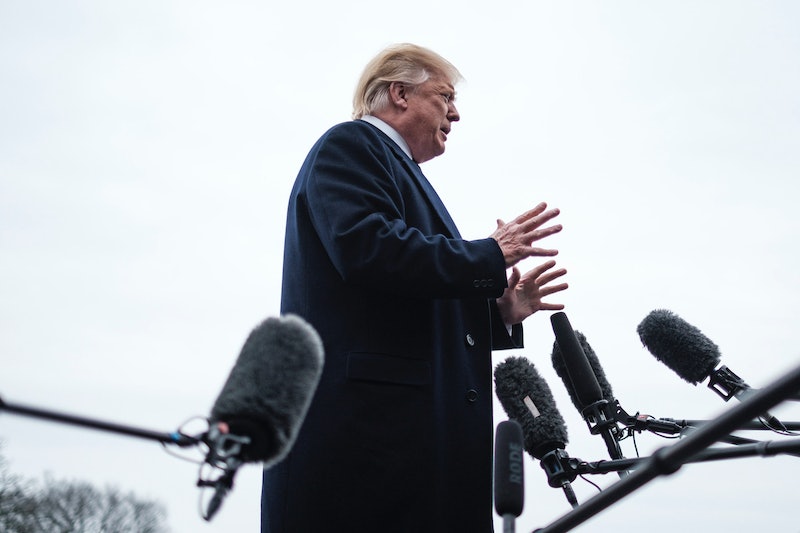 Over the weekend, a media firestorm erupted after a group of high school students from Covington Catholic High School in Kentucky were caught on video allegedly harassing Nathan Phillips, a Native American elder. Since then, numerous contradictory statements have come out about the incident, and the main student claimed the original video didn't show the full story. Donald Trump tweeted about Nick Sandmann and the viral video Tuesday morning, using the contested case as an opportunity to claim a victory over "Fake News."

"Nick Sandmann and the students of Covington have become symbols of Fake News and how evil it can be," Trump wrote in a tweet on Tuesday morning. "They have captivated the attention of the world, and I know they will use it for the good — maybe even to bring people together. It started off unpleasant, but can end in a dream!"

Phillips and Sandmann's statements about the incident differ quite substantially, according to The Washington Post. According to Phillips, boys in MAGA hats surrounded him and a number of other protestors out for the Indigenous Peoples March, chanting Trump slogans like "build that wall."

Sandmann, in his statement, claimed that the students had only been chanting school spirit cheers, and that Phillips had singled him out and approached him for no particular reason.

"I did not make any hand gestures or other aggressive moves," Sandmann wrote in his statement. "To be honest, I was startled and confused as to why he had approached me."

When it was released on Monday, Sandmann's statement fueled even more discussion, with observers finding evidence to support both Sandmann's and Phillips' side of the story. The full video of the interaction also presented a more complicated situation than original reports had claimed; instead of the teenagers surrounding Phillips, the video showed Phillips approaching the students.

In his statement, Phillips said that he was trying to "find myself an exit out of this situation," and that Sandmann had blocked him. Sandmann's statement, on the other hand, claimed that he didn't attempt to block Phillips in any way.

"I never felt like I was blocking the Native American protestor. He did not make any attempt to go around me," Sandmann wrote in his statement, which CNN originally published.

This event is now a piece of contested history: There are multiple different versions of the story, with the actual participants outwardly disagreeing about what happened. Now, President Trump has sided with Sandmann in two tweets.

"Looking like Nick Sandman & Covington Catholic students were treated unfairly with early judgements proving out to be false — smeared by media. Not good, but making big comeback!" he wrote in a Monday tweet, adding a quote from Fox New host Tucker Carlson about the media being wrong.

Phillips, however, has already disputed Sandmann's description of events, according to BuzzFeed News reporter Bianna Sacks, who posted a new statement from Phillips on Twitter.

"He did not apologize," Phillips said. "And I believe there are intentional falsehoods in his testimony."