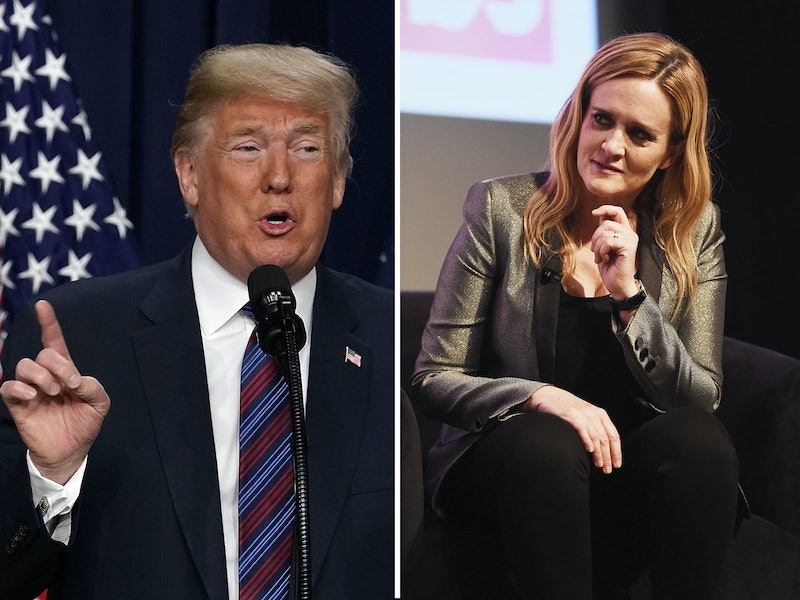 In case you hadn't heard, Samantha Bee, the host of TBS' Full Frontal With Samantha Bee, called Ivanka Trump a "feckless c*nt" on Wednesday night. Ever since, the world's been waiting for President Trump's thoughts on the matter, and they came Friday on Twitter. Trump's tweet about Samantha Bee wondered why she hasn't been fired over her use of "horrible language."

Notably, Donald Trump did not focus his response on defending Ivanka Trump. The president's full tweet read: "Why aren’t they firing no talent Samantha Bee for the horrible language used on her low ratings show? A total double standard but that’s O.K., we are Winning, and will be doing so for a long time to come!" The "double standard" is ostensibly in reference to Roseanne Barr having her titular show canceled over a racist tweet she wrote Monday about Valerie Jarrett, a former adviser to President Obama. Barr has been an outspoken supporter of Trump, whereas Bee is a regular critic of the current president.

It would seem from the president's response to Bee that he's very riled up by the political hypocrisy he perceives in media reactions to offensive statements from stars. But on having his daughter publicly called the c-word, Trump hasn't exactly made any real statement yet.

The White House first responded Thursday to Bee's crass description of Ivanka Trump. Echoing her father's take on the purported "double standard" between reactions to Barr versus Bee, spokesperson Sarah Huckabee Sanders said the TBS network and its parent company Time Warner "must demonstrate that such explicit profanity about female members of this administration will not be condoned."

For her part, Bee issued an apology statement Thursday, saying, "I crossed a line, and I deeply regret it" and describing her use of the c-word as "inappropriate and inexcusable." TBS also spoke out on the manner, labeling Bee's words as "vile and inappropriate" and expressing "regret" that they were ever aired.

Not everyone agrees with the White House's equating of Barr's racist comment and Bee's crass one. Matthew Fleisher argues at the Los Angeles Times that "being foul-mouthed is not the same as a white person calling a black person an ape, or a Jewish Holocaust survivor a Nazi." He notes there are real-world consequences for members of an ethnic or religious group when the voicing of bigoted stereotypes goes unpunished. On the flip side, there's "no such inherent threat," according to Fleisher, when Bee goes after Ivanka Trump.

And as he points out at the end of his opinion piece, President Trump himself is no stranger to using the c-word in public.

Others argue that Trump's most infamous campaign debacle — leaked audio recording of him bragging on Access Hollywood about grabbing women "by the p*ssy" — makes his outrage at Bee smell like hypocrisy. Writer Elad Nohorai said on Twitter, "You're angry about Samantha Bee, but you support a man who described grabbing women without their consent. You've lost your credibility. And we're done listening."

Still, many conservatives and other public pundits disagree. NBC News anchor Megyn Kelly called Bee's rhetoric "disgusting" and asked "how are we expected to take any of these publications seriously if they gleefully repost something like this at the same time they (rightfully) condemn @therealroseanne?" And at the conservative site The Federalist, writer Ellie Bufkin argued, "Whereas Barr used a racist trope, Bee used a blatantly misogynistic one... Yet Bee is being held up as hero by the very same people who demanded Roseanne’s termination."

As far as the president's response, Trump certainly seems more vested in propping up the "fake news" narrative that Bee's media acquittal, as opposed to Barr's termination, looks like a double standard to his supporters than he is in giving a robust defense of his daughter.