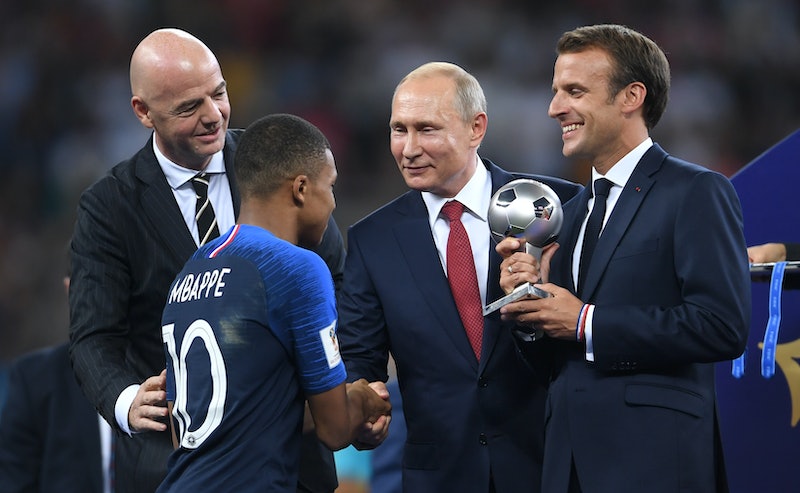 France just won its second World Cup victory overall, and its first since 1998. When he tweeted on the subject, though, President Donald Trump congratulated Vladimir Putin on France's World Cup victory in addition to celebrating the French team.

"Congratulations to France, who played extraordinary soccer, on winning the 2018 World Cup," Trump wrote in a tweet on Sunday, right after the conclusion of the World Cup Final. "Additionally, congratulations to President Putin and Russia for putting on a truly great World Cup Tournament -- one of the best ever!"

France beat Croatia 4-2 in the final game of Russia's 2018 World Cup, 12 years after they lost in the final to Italy in Germany. France, which The New York Times called the best team in this year's field, entered the game as the favorite, with Croatia making a more surprising appearance as the underdog. As the World Cup is the world's biggest sporting event, it's natural that Trump would have congratulated France for its victory. What stands out, of course, is Trump's decision to call attention to Putin in the same tweet. Many observers, including The New York Times, have called this World Cup one of the greatest, if not the greatest tournament of all time. That analysis, though, hinged on the quality of the soccer played in the tournament — and didn't have anything to do with the Russian president's role in organizing it.

There were a lot of wild, memorable moments from the 2018 World Cup, which soccer fans across the globe will be recounting for years to come. Visitors who came to Russia to witness the spectacle on the ground also reported back that they found the country was warm and welcoming, as Reuters photographer Andrew Cawthorne, who was sent to Nizhny Novgorod, wrote in The Independent.

"It was surprising how little rowdiness I witnessed ... I found ordinary Russians, particularly women, to be invariably kind and warm," Reuters photographer Lucy Nicholson told Cawthorne. "This welcoming behaviour could have been inspired by pride in a national event or perhaps by the balmy weather, but much of it seemed spontaneous and genuine."

Based on these observations, a truly fitting congratulations from the American president would have included, perhaps, the other players who took part in the tournament, or the Russian people who opened their arms to thousands upon thousands of visitors. Instead, Trump sent his congratulations to Putin (in addition to the French team).

Putin does certainly deserve credit for bringing the World Cup to Russia, which, as The New York Times wrote, happened in the midst of a cloud of corruption that entirely engulfed soccer's governing organization of FIFA and led to a series of indictments from the FBI. Putin's goals in entering Russia's World Cup bid were, as The Guardian wrote, to make Russia look like a world power again, and to cement himself at the top of the power structure in Russia. With that in mind, he went to great lengths to capture the bid, and, of course, it succeeded. Soon after, The Times wrote, he was reelected president, the position in which he still remains.

On Monday, Trump will be able to congratulate Putin in person on a successful World Cup, when the two of them meet in Helsinki. Trump has always been very complimentary of Putin, so this particular tweet is nothing out of the ordinary. In one way, Trump does give credit where credit is due, because the World Cup wouldn't have happened in Russia without Putin's drive to get it there. On the other hand, no one else seems to be arguing that Putin's involvement was what made this possibly the greatest World Cup ever held.