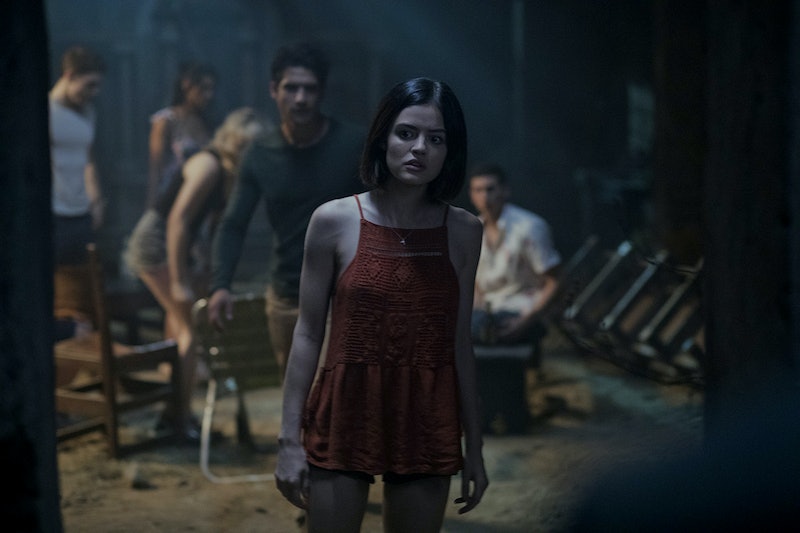 Back in middle school, truth or dare was pretty tame. In high school, it got a bit more provocative. And in Lucy Hale's new movie Truth or Dare, the game gets straight-up deadly. The film follows a group of college friends who travel to Mexico on spring break but find themselves trapped in an inescapable, demonic round of truth or dare, where they quite literally play for their lives. If you don't complete your over-the-top dare or spill your deepest secret, you face an untimely death. And in doing so, the game pushes the characters' limits, as well as the audience's, with some of the challenges viscerally uncomfortable to watch.

"People love to see other people squirm and feel uncomfortable," Hale explains to Bustle, chatting over the phone ahead of the movie's fitting Friday, April 13 release. "And the whole thing is exposing secrets and doing these things that you would never be able to do or want to do."

The movie's plot may sound farfetched, but don't let that fool you; Truth or Dare dives into very real, heavy topics. Spoilers ahead, as well as mentions of suicide that some readers may find triggering. Perhaps the toughest scenes to stomach are the ones where Markie (played by Violett Beane) deals with the aftermath of her father's suicide. The game even makes her go grab the gun he used to kill himself, as she contemplates ending her life the same way. Not only that, but she learns her dad drunkenly came on to her best friend Olivia (played by Hale) the night of his death, adding more layers of discomfort.

While the game's purpose is to make the characters face their biggest fears and insecurities, some could argue that it goes too far. Having a scene involving suicidal ideations — along with another moment where a character is forced to hold his own father at gunpoint — may very well be unsettling to some viewers, especially those who enter the theater expecting a traditional horror movie and instead find themselves caught off-guard by potentially traumatic moments. Given all the ongoing conversations happening regarding gun control and mental health and possible correlations between the two, I ask Hale if she views the scenes in a different light now than during filming.

"I think those are topics that are very current and are very important and should be talked about," the actor says. "Suicide is a very real thing, and the more you talk about it, the better the outcome is." She's not wrong about that; when Logic's song "1-800-273-8255" debuted, for instance, the National Suicide Prevention Lifeline received a surge in their daily call volume, according to Billboard. Calls also spiked after Logic's VMA performance of the song, whose title is the helpline's actual phone number.

But even though the subject of suicide can be important to talk about, it's not necessarily handled as thoughtfully as it should be in Truth or Dare. And as the National Suicide Prevention Lifeline's site points out, "Covering suicide is never easy, but it's very important to do it right. Research has shown that improper reporting on suicide can contribute to additional suicides and suicide attempts."

While the movie doesn't dismiss the subject, it does feel like a plot point thrown in mostly for suspense and entertainment. Its star, though, disagrees. "We're not, like, flaunting around guns within the movie," says Hale, who's been vocal on Twitter about the need for stricter gun laws on more than one occasion. "I think talk of suicide is something that's very real and a lot of people can relate to."

"To me, that's the most heartbreaking part of the film," she adds, referencing the moment where Olivia finds Markie alone in her bedroom, staring at her late father's gun. "And the fact that we go there and we do talk about it is something that I'm kind of proud of with this movie."

Still, not everyone thinks the scenes are handled in the most tactful way. Katie Rife at The A.V. Club wrote, "It’s hard to have a hearty, derisive laugh at a ridiculous plot point when it involves a parent committing suicide. It’s a muddled, contradictory, confusing mess, made even more so by the darkly cynical streak that runs through the film." Meanwhile, Twitter user @jjensen1031 claimed that the movie "sensationalizes traumatic experiences that real people experience in real life" and called it "distasteful."

And that's not the only plot point that didn't sit well with some audience members. Brad (played by Hayden Szeto) must come out to his seemingly close-minded dad, otherwise he'll be killed by the game. He's stuck making a deeply personal decision before he's ready for the sake of survival. On Twitter, Australian journalist Laurence Barber argued the movie "exploits a son's coming out to his father for cheap, unworthy tension." Another fan on Twitter deemed the film "offensively bad," citing the coming out scene as a reason.

When asked about this polarizing moment, Hale seems to view its outcome as primarily positive. "Obviously the game is very evil, and you don't want to be playing, but at the end of the day, the game kind of helps them in a way," she explains. "Because Hayden's character in the movie never would have come out to his dad if it weren't for the game. It's one of the moments in the movie that I love the most, because it's kind of like a relief."

The actor does raise a valid point; what could've been an emotionally painful moment thankfully works out in Brad's favor. Or at least temporarily, because he's the aforementioned character who must grab his police officer father's gun, force him to beg for his life, and winds up getting shot by another officer instead.

If these plot points — where someone is basically blackmailed into doing horrific things against their will — sound familiar, yes, you're onto something. "Fans of Pretty Little Liars will obviously love this movie," Hale says. She's spot on; the demon running the game has major A-like tendencies.

However, the actor who played Aria Montgomery for seven seasons makes a few distinctions between her two projects. "Even though Truth or Dare is definitely a scenario that would never happen in real life, it still felt more down to earth than PLL," Hale says. "PLL seemed so heightened, and lived in this very campy world, where Truth Or Dare was much more raw and sort of broken down."

Even still, the ending of the new movie will throw viewers for the kind of good-scary loop that so many episodes of PLL did. "I love the ending. It's definitely not what I expected, either," Hale says. "Without giving too much away, it goes to show that Olivia is very smart and two steps ahead of everyone, including this demon who's in control of this game."

So if you were a PLL fan, the suspenseful Truth or Dare may be right up your alley. Just make sure to go into it bracing yourself for those more uncomfortable moments.