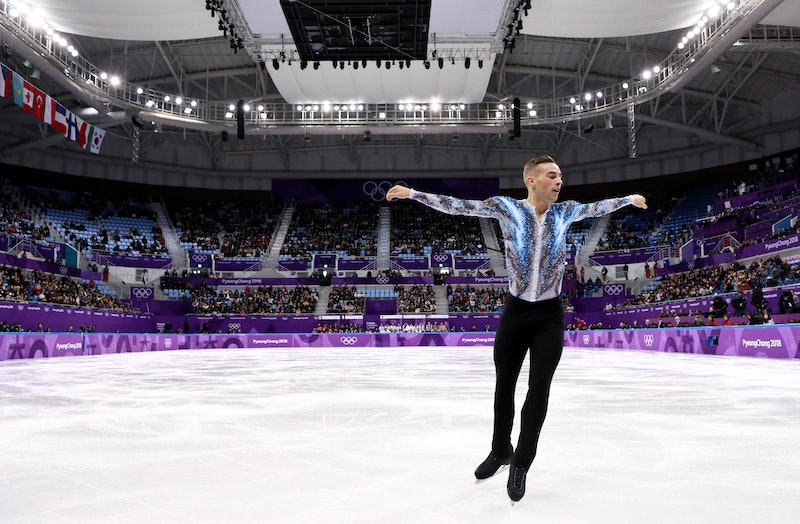 On Sunday night in PyeongChang, Adam Rippon skated to Coldplay and the tweets show it was a huge success. Already predicted to be an Olympic favorite, the athlete just about solidified his place in history — whether he wins a medal or not.

First off, Rippon skated unto the ice in a bright blue, sparkly outfit. Even before his routine officially began, that outfit by itself was winning people over. In fact, according to Twitter, don't be surprised if there's a huge spike in bedazzler sales. As it turns out, Rippon had a feeling people would love him.

“Am I prepared for people to fall in love with me?” Rippon said to USA Today a few weeks before the Olympics began. “Are (people) ready for me though? I am ready. I’ve been ready my whole life.” And based on his performance, he wasn't lying.

And the fact that Olympic skaters can dance to songs with lyrics — for the first time ever — allows an athlete's personality to shine even more. Rippon chose to make his Olympic debut to Coldplay's "O," telling Billboard that "Chris Martin has this voice that resonates through a whole arena." Though the song by itself might not have been a favorite among lots of Twitter users, Rippon's performance made them love it.

Check out just a portion of his performance here:

These tweets make it crystal clear: we'll all be seeing much more of Rippon. Both on and off the ice.

You Don't Need To Know A Lot About Skating ...

I don't need to be an expert. Rippon's performance was a masterpiece.

It was so masterful that a lot of fans were real mad when he ranked third place behind Canada and Russia.

Remember those things? Well, you might want to dig yours up.

Look At Them Now

Funny thing, but this is true. Yes, both got passed over for the 2014 Winter Olympics and ate fast food, according to USA Today. Now, they're roommates in PyeongChang and absolutely killing it on the ice. After his routine, he told NBC's Tirico all about it.

We were eating In-N-Out because we were so upset we weren't at the Olympic games. Tonight — the Olympics are truly magical because we came out here tonight ... we gave each other a hug and said, 'Mirai, we're here! We did it!'

If you're one of those people who only gets extremely patriotic during the Olympics, Rippon's performance may have just taken your patriotism to the next level.

Rippon is the first openly gay U.S. man to qualify for the Olympics, and it isn't difficult to understand why he opposes Mike Pence. The politician's record on gay rights, after all, is abysmal. On Jan. 17 before the games began, Rippon said he disagreed with America's decision to have Pence lead the U.S. delegation. “If it were before my event, I would absolutely not go out of my way to meet somebody who I felt has gone out of their way to not only show that they aren’t a friend of a gay person but that they think that they’re sick,” Rippon told USA Today at the time. One of Pence's spokespersons told USA Today that the accusation that Pence supported gay conversion therapy is false.

After NBC asked Rippon if the Olympics were everything he imagined, he had the best response. "Andrea," he sighed, "It's like pretty awesome. I highly recommend it if you ever have the option to go to the Olympics. It's like a fun time. You know, today was just so special. So much fun."

You might be sick of Coldplay, but this song totally worked.

People were not happy he placed third.

Pretty much sums it up.

It's fun when new stars emerge out of the Olympics. And without doubt, Rippon will continue to inspire viewers even after the games are finished.