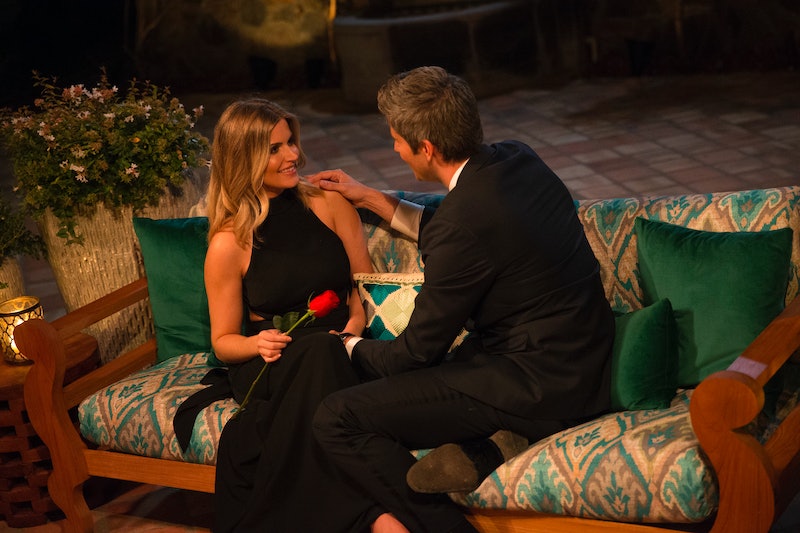 As if watching The Bachelor wasn't enjoyable enough, live tweeting the episodes makes it an even better experience. Tweets about Arie's Bachelor premiere show what fans are already most excited about when it comes to Season 22. There was a lot to discuss.

The first episode is always hilarious. From the intriguing introduction videos, to the attempts to stand out during the limo entrances, and the inevitable jealousy whenever someone asks to "steal him for a second," there was just so much good material to tweet about.

Of course, there were plenty of jokes about the four girls named Lauren all arriving in the same limo and entering the mansion in succession. And there was also commentary about some of the women's arrival jokes falling flat, Tia giving off some Raven Gates 2.0 vibes, and Chelsea narrating the entire episode and mentioning a "secret" over and over again without ever sharing anything remotely personal with Arie. And no one could get over the second hand embarrassment of Arie telling Bekah that "excitement makes him excited." So. Awkward.

If you were thinking it and didn't tweet it yourself, someone else did. These are some of the most on point observations about Monday night's premiere episode of The Bachelor.

1. There Are So Many Laurens

There are four Laurens on this season of The Bachelor. So, of course, there are so many Lauren jokes on any Bach fan's Twitter timeline.

All of Raven's fans are happy that Raven found love with Adam Gottschalk on Bachelor In Paradise Season 4 and has no reason to be on a dating show, but she's definitely missed. Thankfully, Raven's BFF Tia is on the show and she has a very similar Arkansas accent.

3. Can Bekah Reveal Her Age Already?

Bekah made a great first impression on Arie and the viewers. Who cares how old she is? She is well-spoken, entertaining, and mature. On the other hand, why won't she just say how old she is in her conversation with Arie? She's also the one who first brought up the age difference when she referred to him as a "classic" during her limo arrival. Arie even brought it up later in the night and she still didn't share her age.

Let's attribute that response to first night nerves, but it was definitely tough to watch.

5. Bekah Made A Great First Impression

Exactly. Age ain't nothing but a number and Bekah really killed it on night one.

6. Bekah Is The Second Nanny To Make An Impact On This Show

Hopefully that wasn't her actual first response and Krystal is just a victim of editing. Either way, that was just too funny not to laugh about.

8. They Were "Surprised" There Were So Many Women There

Seriously? It's Season 22 of The Bachelor. There are always 25 to 30 women walking into the mansion on night one. Absolutely nothing to be surprised about.

9. There Are So Many Blondes

Does Arie have a type?

10. The First Impression Rose Put Everyone Into A Frenzy

Yes, usually making a good first impression does involve having an actual conversation.

11. Arie's Explanation For The First Impression Rose Didn't Add Up

Obviously, there's a lot of editing on this show, but that line of reasoning just doesn't make the most sense.

They could just be upset that they won't get to wear the rest of the outfits they packed for the show. Or maybe they were just super tired since they walked out of the mansion in the daylight? Either way, it was a total cry fest, as per usual.

13. They Aren't All Meant To Be Social Media Influencers

That's rough. A social media following probably doesn't increase too much for anyone who's out on the first night.

Arie definitely held his own.

Night one gave the fandom so much to talk about. Buckle up, it's going to be a wild ride. Yes, that was a race car reference. Get used to it. There will be a lot more of those this season.

More like this
Becca Tilley Confirmed Her & Hayley Kiyoko’s 4-Year Romance With A Heartfelt Note
By Brad Witter
Twitter Has Very Mixed Feelings About The New 'American Idol' Winner
By Jake Viswanath
Twitter Is Upset About The 'American Idol' Top 3 Results: "Who TF Is Voting?"
By Jake Viswanath
Twitter Is In Utter Meltdown After 'Derry Girls’ “Poignant” Finale
By Sam Ramsden
Get Even More From Bustle — Sign Up For The Newsletter