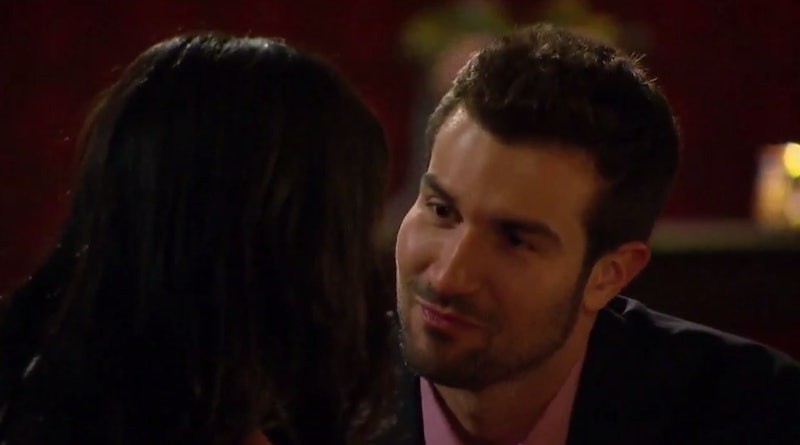 The most recent Bachelorette episode was tough to watch. It definitely came across like Rachel was way more invested in some relationships than others. It is very obvious that there is something special between Rachel and Bryan. So, of course, all of a sudden every single guy had comments to make about Bryan when he became a clear frontrunner with a second solo date. Sure, Bryan and Rachel's chemistry is palpable, but it's so hard to figure him out. And don't even bother looking to Twitter for answers. There are plenty of tweets about Episode 7 of Rachel's Bachelorette season that prove no one knows how to feel about Bryan.

Some fans cannot deny the strong connection between Bryan and Rachel, while others just chalk it up to a mere physical connection and nothing more. When Bryan got the first one-on-one date of the episode after he just had a solo date with Rachel, the claws came out and everyone questioned how their own relationship with Rachel stacked up in comparison to Bryan's.

Is anyone else getting déjà vu from last season of The Bachelorette when everyone was super jealous of JoJo Fletcher's strong connection with Jordan Rodgers pretty much the entire time? Or do you recall the entire cast sulking during that pig date in the Bahamas when Ben Higgins blatantly favored Lauren Bushnell over the other ladies? In all honesty, Bryan's name in everyone's mouth is probably a good sign when it comes to his final rose potential.

Still, the contestants and fans have no idea how to personally feel about Bryan and at this point there are more questions than answers.

1. Why Was There So Much Bryan And So Little Matt?

The fans need an explanation for how these episodes were put together. Rachel said that she "saw herself" in Matt more than any of the other guys, but us viewers never witnessed this.

2. Why Is Anyone Even Competing Against Bryan?

What is the point? It really seems like she is the most into Bryan.

3. How Did Matt End Up Talking To Rachel More Than Bryan?

There was more emotion in that minute-and-a-half convo with Rachel and Matt than there has been with Bryan this whole time.

It (kind of) makes sense for the other guys to be jealous of Bryan, but now Dean and Peter are hating on him? Is it jealousy or legitimate concern?

5. Can They Show More Dean & Peter Bromance Instead Of Bryan & Rachel?

Even though the smack talking isn't the best look, the bonding time with Peter and Dean was the most adorable one-on-one session of the night.

From Dean and Peter using their free time to talk about Bryan, to the clips from his one-on-one date with Rachel interrupting the bromance, it's hard to know which duo to root for.

7. How Did Adam Think He Had A Better Shot Than Bryan?

Adam had to feel so awkward watching that episode.

His age might be more of a benefit than a disadvantage.

Can guys in their thirties not date without it being suspicious?

At least hometowns are next week, so they won't really have to see each other anymore.

11. Did Everyone Just Forget About Adam Jr.?

At least Bryan showed up for this experience solo.

12. How Did Bryan Get A Watch & Matt Got A Million Group Dates?

Taking a drink to go is such a consolation prize in comparison to a luxury watch.

13. How Does Adam Think He's Closer To Rachel Than Bryan Is?

It's so tough trying to figure out Bryan. Thankfully, no one really has to do this except for Rachel, so at the end of the day everyone should just trust her judgment and let her make her own decisions. Obviously, that's not going to happen, though. With a few more episodes left, don't expect the live-tweeting to slow down.