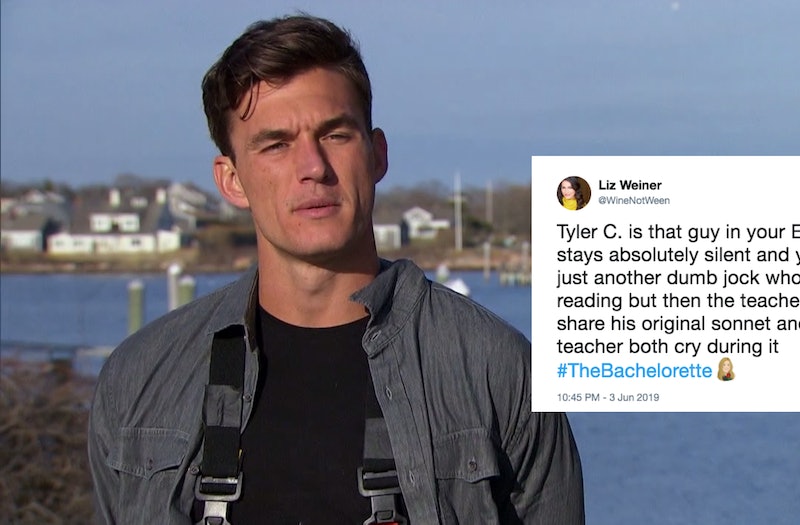 For the first three episodes of Hannah Brown's Bachelorette season, Tyler C. was known for his perfect jawline and affinity for salmon blazers. After his one-on-one date with Hannah, everything changed. Bachelorette viewers are suddenly Tyler C. fans for more than just his wardrobe and looks. Props to everyone who saw his greatness from the beginning, but for the most part, the fandom didn't get on board until the Monday, June 3 episode.

Now, all of Bachelor Nation is in love with Tyler C. and hoping that Hannah feels the same way. Not gonna lie, it seemed like Tyler and Hannah's date was going to be downer. Unfortunately, she was not her positive, energetic self at the start of it, thanks to all of that Luke on Luke drama.

She didn't front when Tyler asked how she was doing. Instead, Hannah admitted, "I want today to be fun, but I'm just not that fun right now. I'm really sorry." And that's when a bad day for Hannah turned into a good day for getting to know Tyler. He responded,

"Don't be sorry. We're gonna have fun regardless. We'll make the most of it. I got you, don't worry."

He managed to come through with the most genuinely uplifting pep talk.

At the start of their date, Tyler told Hannah,

And now, fans are convinced that Tyler is, in fact, "the most amazing person ever." When Hannah apologized for not being in the best mood that day, Tyler won all of us over when he said, " I want you in your highs and I want you in your lows. I'll take whatever I can get with you."

Their date may have had a rough start, but by the end of it, both Hannah and Bachelorette fans were both smitten with Tyler. Not only did he get that rose, but he also received a lot of praise on Twitter.

1. America Fell In Love With Tyler

Who wouldn't fall in love with Tyler? He's here for the right seasons and he said all of the right things.

2. He Surprised Us All

Tyler just proves that you can't just a book by its cover. He brings it all to the table: model looks and sincere, eloquent speeches.

3. It Happened So Suddenly

It happened quickly, but everyone is a Tyler fan after his solo date with Hannah.

4. The Date Was A Game-Changer

It's not as if Tyler did something off-putting during the first three episodes, but after the most recent one, he's gained a lot of support from Bachelorette viewers.

5. Their Chemistry Was So Natural

Chemistry isn't just hot and heavy makeout sessions. Hannah and Tyler's date demonstrated that they can get through tough days if they're by each other's side.

7. Tyler Is In The Spotlight For All The Right Reasons

Usually guys don't get screen time unless they're fighting or trash talking, but viewers want to see way more of Tyler C. after that great date.

The Bachelorette has turned into The Luke P. show, but it should really be about Hannah and Tyler C.

Tyler managed to say all the right things and still come across as a completely genuine guy.

11. He Was So Comforting

Hannah was able to be herself, work through her struggles, and have fun on that date. Tyler is definitely a frontrunner at this point.

12. He Wants Her To Be Herself

There's a lot of pressure to be "on" as the Bachelorette, but Tyler made Hannah comfortable enough to express her emotions, instead of putting on a brave face.

13. He Has Final Rose Written All Over Him

Being compared to Ryan Sutter is a big deal. After all, he was the first Bachelorette "winner" and he's still married to Trista. Will Hannah and Tyler be the next Trista and Ryan? Let's hope so.

Tyler C. is the Bachelorette contestant we didn't know we needed. He is an active listener who knows what what to say during tough times. He has a great sense of humor. And most importantly he's "always gonna have" Hannah's back. Or at least that's what the fans are hoping. Can we drop the "C" and just call him "Tyler"? Viewers are ready.