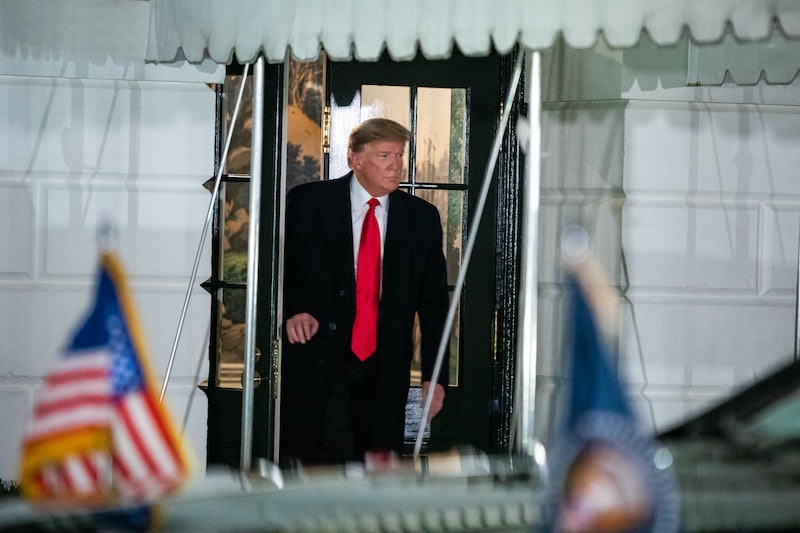 As President Trump approached the dais on Tuesday to deliver the State of the Union address, many viewers immediately noticed that something was a bit off: His tie. The president's neckpiece was crooked, with the bottom half tucked underneath the left side of his blazer — which resulted in a flood of tweets and jokes about Trump's tie at the State of the Union address.

Trump's ties have drawn attention in the past, namely for being unusually long or held together by tape. On Tuesday, though, its most prominent feature — in addition to its blinding red color, which some likened to a maraschino cherry — was that it wasn't straight.

For several weeks, it was unclear whether there would even be a State of the Union address. During the government shutdown, Speaker of the House Nancy Pelosi effectively canceled the speech, telling Trump in a letter that she had rescinded his invitation to give the address, and wouldn't offer it back until the shutdown was over.

Days later, Trump ended the shutdown by agreeing to sign a government funding bill; shortly thereafter, Pelosi re-extended her invitation to have him speak in the House chambers, and the two settled on Feb. 5 as the new date of the address.

On Tuesday evening, one of the first things that people noticed was Trump's crooked tie. "Trump’s giant red power tie is crooked and none of his people had the guts to tell him," tweeted Adam Best, host of the podcast The Left. "A perfect metaphor for his presidency."

"I'm sure Trump will be pleased when he rewatches his intro later and notices his tie," CNN reporter Oliver Darcy tweeted.

"Sorry, I’m very distracted with Donald Trump giving the State of the Union speech and his damn tie is crooked," user @diannamaria tweeted. "Does he not have even ONE friend to tell him? He never looks presidential no matter how hard he tries."

"Trump's tie tucked to his side like he's going to eat pizza with a knife and fork again," quipped Philadelphia Enquirer columnist Will Best.

"Someone needs to adjust Trump’s crooked tie or it will ruin my evening," wrote Mediaite founding editor Colby Hall.

Several Democratic lawmakers boycotted Trump's speech. Georgia Reps. Hank Johnson and John Lewis sat it out — Lewis for the second year in a row — on account of the various disparaging remarks Trump has made about racial minorities, while Rep. Earl Blumenauer of Oregon announced that he wouldn't attend because "the thought of spending Tuesday night in the House Chamber listening to the reckless, self-centered man who occupies the White House holds no interest for me." Rep. Steve Cohen of Tennessee said that he won't attend the State of the Union until he "can hear from a president who will tell the truth about the State of the Union."

In addition, several female lawmakers wore white to the speech as a show of support for gender equality and women's rights; in the early 20th century, suffragettes would often wear white while lobbying for the right to vote.

As Trump spoke and gesticulated throughout the speech, his tie inadvertently straightened itself out. Many noted, however, that Pelosi's necklace was slightly crooked.