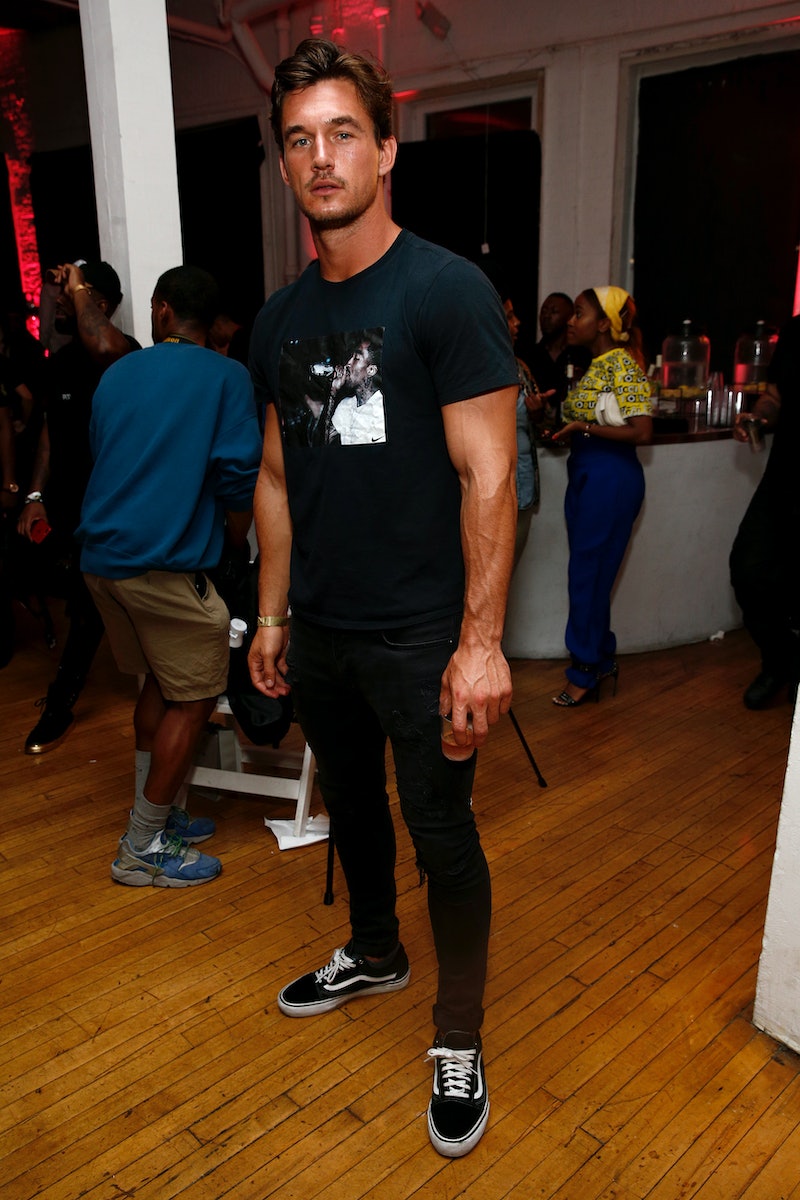 The Bachelorette fans have been following Tyler Cameron's every move ever since the season wrapped. Tyler has been spotted with Gigi Hadid several times since August, but their relationship status is a bit unclear. Tyler C. teased he "may be single" during his Oct. 1 appearance on Watch What Happens Live With Andy Cohen. He couldn't have been any more vague, and the comment did not confirm his relationship status with Gigi.

Guest Jenny McCarthy asked Tyler, "Are you single right now?" In response, he told her, "I may be single." After the WWHL appearance, Tyler posted a photo from the set on Instagram and wrote, "So @bravoandy, what do you think of doing the real husbands of the LES?" The caption may have hinted at his relationship status with someone in New York, which is where Gigi lives. Or it's possible that the caption is not-at-all-related to the supermodel. For the record, Andy Cohen commented "I'm in." Tyler did just move into his own NYC apartment, so this could actually happen.

Nevertheless, Tyler and Gigi have a platonic relationship, or at least that's what Tyler conveyed to Entertainment Tonight in an interview published on Sept. 24. Tyler claimed, "We're just friends. I mean... that's just where we're at. Our relationship doesn't need to be public. She's good people, she's an amazing person and we're just keeping it friendly."

In that same interview, the Bachelorette runner-up said, "I'm at the point where I don't really want to talk about my relationships. I've dated publicly, so... I'm trying to date privately and I'm not in love with anybody right now." He said he doesn't have to be "in love with anybody" to date them. Still, it seemed like Tyler and Gigi were dating in recent months. Or at the very least, they appeared to be somewhat close considering that he traveled to the Netherlands to accompany Gigi and her entire family to her grandmother's funeral in September.

Before that, the two models were photographed multiple times in the United States. They were first seen together at DUMBO House in Brooklyn on Aug. 4. The following night, Tyler and Gigi went bowling with a group of friends in New York City, which was reported by People. The next morning E! News shared photos of Tyler leaving Gigi's apartment the morning after bowling.

On Aug. 12, E! News shared photos of Tyler and Gigi leaving her apartment, separately. That's not a definite indication of a romance, but it's not as if the were both at a public place. They were both in her home, which is a rather personal place.

The two of them haven't been seen together since the funeral in Amsterdam, but that isn't necessarily an indication of their status. Gigi has been walking the runways in Paris. Meanwhile, Tyler is settling into his new apartment and making appearances on talk shows like Watch What Happens Live. They seem to be both busy.

Gigi has not publicly addressed her hang outs with Tyler, but he has been pretty vague whenever he's been asked about them. He seems to be sticking to saying that they're "just friends" and now the wait is on to see if the paparazzi spot them hanging out again.