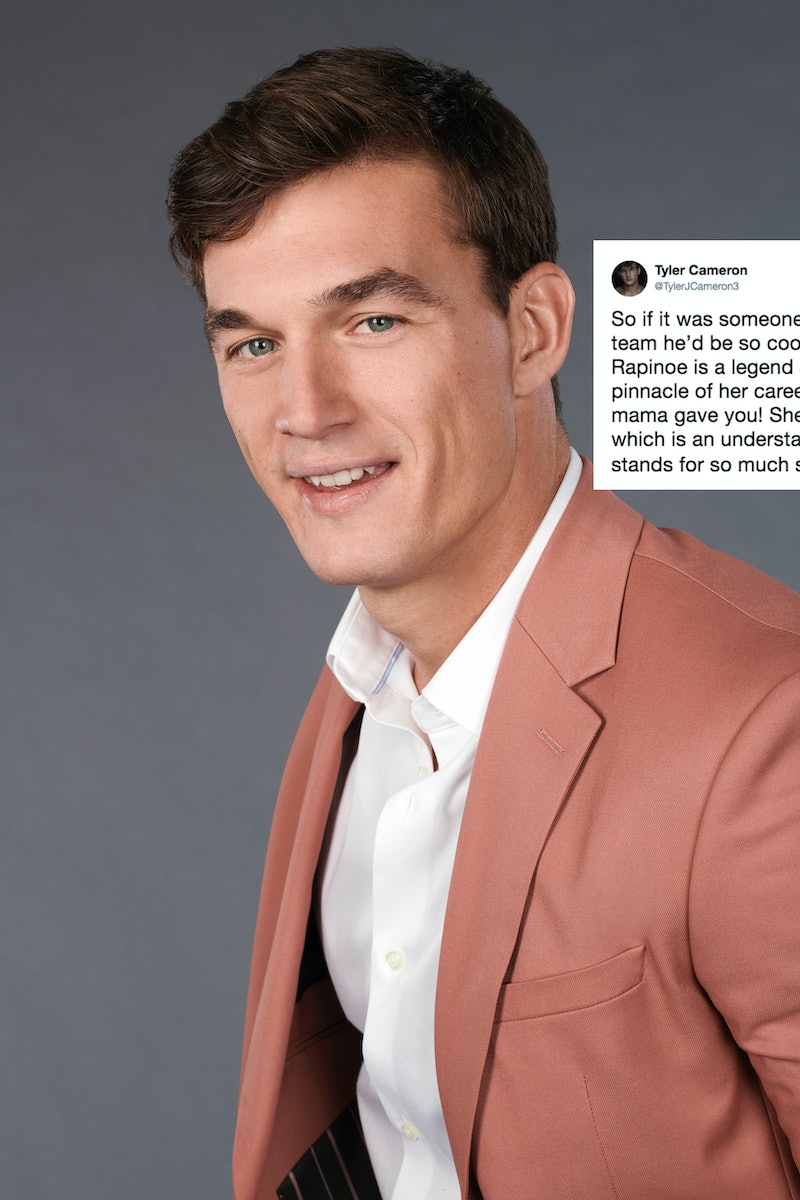 If you thought you couldn't love Tyler Cameron from The Bachelorette any more than you already do, think again, because the contestant is about to capture your heart once more with his latest Twitter message. On the social media site, Tyler from The Bachelorette defended Megan Rapinoe against trolls by writing a message that focused on spreading love and positivity into the world.

Following the United States Women's Soccer Team's World Cup win, the team has largely been on a well-deserved victory lap around the country. During their championship parade in New York City, player Megan Rapinoe took a moment to dance along with her teammates and the crowd, an action that one Twitter user thought fit to make fun of.

Well, everyone's favorite contestant from this season of The Bachelorette didn't think that there was anything wrong with Rapinoe getting her dance on. Tyler, who is a proud dancer himself, responded to that user's negative note on July 15 with a statement that can only be described as "perfection":

"So if it was someone from the men’s soccer team he’d be so cool then, right Derek? Smh, Rapinoe is a legend and reached the pinnacle of her career. Shake what your mama gave you! Shes the definition of 'cool' which is an understatement for her She stands for so much she’s a hero."

That wasn't all he had to say, though. He went on to say in a subsequent tweet that there were, unfortunately, many who responded to his message with "hate." But, Tyler, like the "younger generation" that he has hope in, is determined to lead with positivity and love instead. He wrote,

"Look at the people who disagree and hate on this post. It’s mainly older men and women. The younger generation spreads love and will change this world."

Given the Bachelorette star's proven track record with supporting charitable causes and speaking out against trolls, it's clear that he practices what he preaches.

If you follow Tyler on social media, you would know that the reality TV contestant is always giving back to the community. Not only has he done extensive work with ABC Food Tours, which helps kids in underserved communities by taking them out to eat at restaurants around New York City, but he frequently highlights other important causes on his social media accounts.

Additionally, he's not afraid to speak up for what's right, just as he did recently. In late June, Tyler defended Bachelorette lead Hannah Brown after a former contestant on the series, James Taylor, who appeared on JoJo Fletcher's season, criticized and (unfairly) judged her behavior on the season with the men. He said, "Make choices your future husband will be proud of after watching you do what you do on TV You don’t have to dry hump em all."

Tyler didn't let that slide, as he responded to James' message with a straightforward tweet that not only served as a defense for Hannah, but also as a word of advice to anyone who wants to judge someone else's actions. He wrote, in part, "The things some people do to stay relevant... let our Queen live and let’s embrace her on this journey."

Based on these recent Twitter moments, you can tell that Tyler simply isn't going to stand for any hatred and will instead be leading with love.