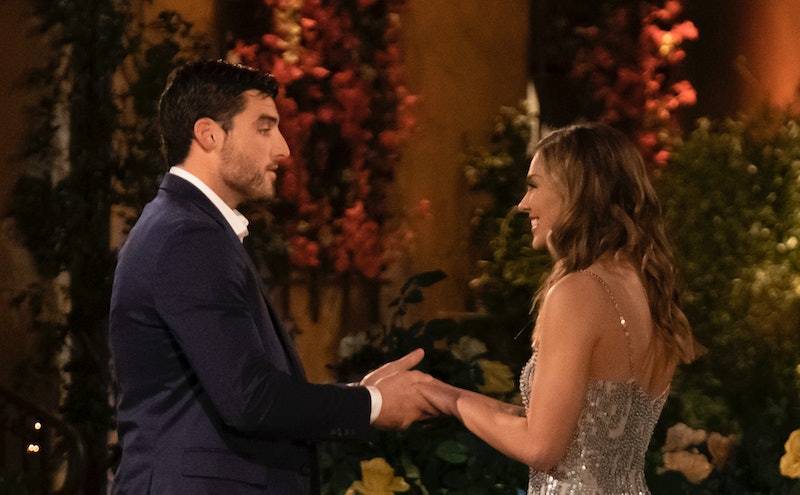 John Fleenor/ABC
By Caitlin Gallagher
May 13, 2019

Many people in Bachelor Nation parlay their time on the franchise into Instagram brand deals, but before contestants join the show, they're just regular, private citizens who maybe don't want their online presence to be super public. Tyler Gwozdz on The Bachelorette is one of those people, since before Hannah B.'s season started on May 13, his Instagram was private. Depending on how his time on the show goes, he could make his social media public. But for now, this traveling salesman and dream analyzer is staying on the more mysterious side.

Tyler G. is one of two Tylers this season, along with Tyler C. While they're both from Florida, Tyler G. seems to have ended up in the state in a roundabout way. His Instagram profile notes that he's lived in Nashville, New York City, and Boca Raton, while his Facebook profile has him being from Riverside, Connecticut, but living in Nashville. So his move to Florida might be on the newer side, though it's not really rare for people to have their town on the show not accurately reflect where they're from. For instance, Jason Tartick from Becca's Bachelorette season was listed as being from Buffalo, New York, but he really lived in Seattle at the time the show aired.

Maybe Tyler picked Florida as his hometown not just because he actively lives there now, but because his Bachelorette bio lists him as a "very laid-back guy with a go-with-the-flow kind of attitude." He also likes "relaxing on a boat," which is probably easy to come by in the coastal city.

The reason Tyler moved to Florida is because he is a graduate student at Florida Atlantic University in Boca Raton. As his LinkedIn profile shows, he's studying clinical psychology there, and his Bachelorette bio says that his "life goal" is to get his Ph.D. and become a clinical psychologist. In the meantime, he has a side business in dream therapy analysis, so that will at least give him something interesting to talk about during the first cocktail party.

Speaking of cocktails, before his move to psychology, Tyler was in sales for an alcoholic beverage company. According to his LinkedIn, he was the first salesperson for the newly launched Spiked Seltzer back in 2014 (it's now known as BON & VIV Spiked Seltzer). While Tyler is from Connecticut and started his career with them in New England, he wrote that he moved to Nashville to launch the North Carolina and Tennessee markets for the company. After more than two years, he then focused on growing the brand in Texas, Louisiana, Oklahoma, Arkansas, and New Mexico.

Tyler's bachelor's degree is in economics from Trinity College in Hartford, Connecticut, but he's clearly made a major life change leaving the alcohol sales industry in the middle of the country to pursue a psychology degree in Florida. Perhaps his education in the mental health field will give him insight into his fellow contestants and an edge at the Bachelor mansion. And if not, well — at least he should know his way around a cocktail party.