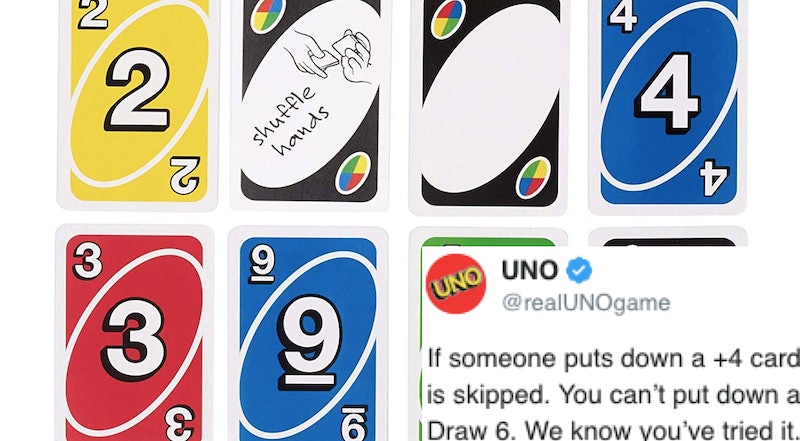 Sorry guys, but the days of stacking are over. As you probably know, Uno is one of the best games if you kind of hate your friends and want to create endless chaos and ruin your bonds forever. You can be truly diabolical if you want to be — or can you? Uno has made a public announcement to say you can't stack Uno cards — the "Draw Four" and "Draw Two" specifically. Apologies to evil geniuses everywhere, but your sadistic reign is finally over.

If you've ever played the game, you know that when some people are faced with a "Draw Four" card — meaning you have to take four cards and lose a turn — they instead drop their own "Draw Two" card, meaning the next player actually has to draw a total of six cards. Brutal, right? But according to the official Uno Twitter account (I'm so glad that that's a thing), you aren't technically allowed to stack those cards together. In fact, it even says so in the Uno official rules. Although it may not make the game quite as brutal and quite as cruel, them's are definitely the rules. Uno says so. So it's time that card stackers around the globe clean up their acts and play fair. Uno obviously knows that this is a favorite tactic of some players and wants to put an end to it.

As you might imagine, the internet was not happy about the results. Quite a few people said that, despite being the official Twitter account, that they didn't know what they were talking about and misunderstood their own damn game. It suffices to say that not everyone is going to bend to the official Uno's will — I think quite a few people are going to stick with the original gameplay strategy. But if you can't win fair and square, is it really worth it?

To make matters even worse, the company also clarified that you cannot stack any draw cards in combination. Fans tried to beg and barter with the account to find a way to bend the rules, but no such luck. Uno's judgment was swift and unyielding.

This isn't the first time that we've had to accept that the ways we play some our favorite board games are, well, actually totally wrong. In fact, lots of people have their own takes on different games. While playing board games together can be a great way to spend time with friends and family, it can also get ugly — especially when you disagree on the rules. In fact, there's a Cheater's Edition of Monopoly, for those who really like to bend all the rules, from stealing money to moving other player's pieces. Could a cheating version of Uno be on the cards? We can only hope. Until then, it might be better to stick with two-player board games with someone you can trust, if you're worried about duplicitous and unfair tactics ruining the true and honest spirit of the world of board games. It is a sacred place.

So are the days of stacking Uno cards over? Somehow, I doubt it. But the official Uno Twitter account has spoken, so disobey the rules at your peril.

More like this
Heinz Just Relaunched A Bean-Tastic '90s Fave
By Sam Ramsden
People Are Flocking To The Hive Social App Following Twitter’s Changes
By Kaitlyn Wylde and Alexis Morillo
5-Year High School Reunions Vs. 10-Year High School Reunions
By Ginny Hogan
15 Gifts That Bring Your Faraway Loved Ones Closer During The Holidays
By Kaitlin Marks
Get Even More From Bustle — Sign Up For The Newsletter