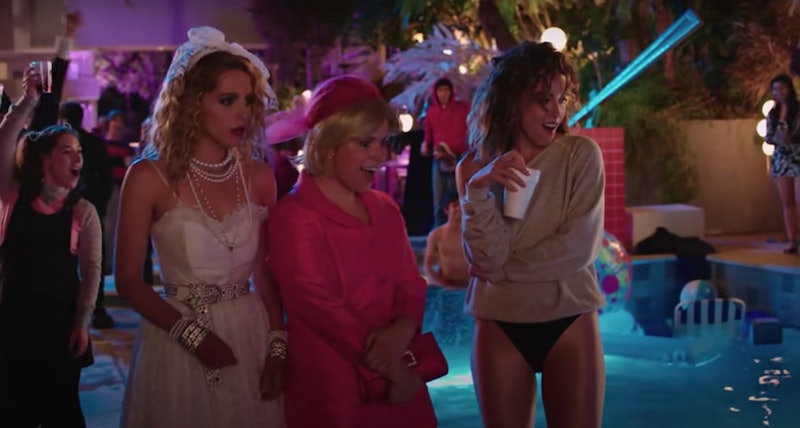 They say if you don't learn from the mistakes of the past, you're doomed to repeat them. Opening with a daughter's present day heartbreak, Valley Girl follows her mom (Alicia Silverstone) back to the heady years of the 1980s, when her own breakup turned into a star-crossed love story between punks and preppies. 2020's Valley Girl is a pop musical update of an '80s take on Shakespeare and Frank Zappa, showing that love can break through any obstacles, including zip codes.

In the film, Silverstone plays the older, wiser Julie Richman, once a ditzy rich gal from the Valley in California. Her younger self, played by Jessica Rothe, finds herself falling for Randy (Poldark's Josh Whitehouse), a punk guy from the wrong side of the tracks. Though Richman's remembered 2020 version features choreography and singing, her original story was told in the actually-from-the-era 1983 film Valley Girl, where Nicolas Cage played the part of Randy.

The new story is the same as its source material, with two people from wildly different mall cliques stepping into each other's world against their friends' disapproval. But where the 2020 version fits what Randy calls Julie's "shiny, bright, perfect life," with big-budget numbers and colorful neon sets, the original Valley Girl was closer to Randy's punk vibe - a low-budget communal effort where the actors brought their own wardrobe and Nic Cage lived in his car for the duration of filming.

The original film also made no bones about its own sources, clearly modeled on Shakespeare's timeless tale of torrid teen trauma and infatuation, Romeo and Juliet. As if the names Randy and Julie weren't a hint, they first kiss in front of a movie marquee reading Romeo and Juliet. 1983 Valley Girl director Martha Coolidge says parallels to Shakespeare's story "were always meant to be fun and not super serious, but were based on truthful observations about the local conflicts and real teen pressures."

The film's name comes from the 1982 song "Valley Girl" by Frank Zappa. The surprise hit features Zappa's daughter Moon Unit spouting exaggerated "Valley" slang, and was meant to mock what Zappa saw as "airheads." "I don't want people to act like that," he told Yahoo! "I think Valley Girls are disgusting." Zappa tried suing the '83 film to stop production, claiming the film's title created "unfair competition" but was about as successful as Romeo and Juliet's parents were at keeping them apart.

The 2020 update was put off in hopes it could get a big-screen release, but as movie theaters remain closed for the foreseeable future, Valley Girl's hitting streaming services on May 8 for audiences to take a look back at a classic tale once updated, now flashbacked.

More like this
Britney Spears Shares & Deletes Photos Of Justin Timberlake From 22 Years Ago
By Jake Viswanath
Jennifer Coolidge Recites “Jenny From The Block” Beside J.Lo In Her First TikTok
By Jake Viswanath
Hilary Duff's Husband Matthew Koma Has Her Name Tattooed On His Butt
By Jake Viswanath and Stephanie Downs
Cruz Beckham Teased New Music With An Adorable Nod To Mom Victoria Beckham
By Stephanie Topacio Long
Get Even More From Bustle — Sign Up For The Newsletter
From hair trends to relationship advice, our daily newsletter has everything you need to sound like a person who’s on TikTok, even if you aren’t.