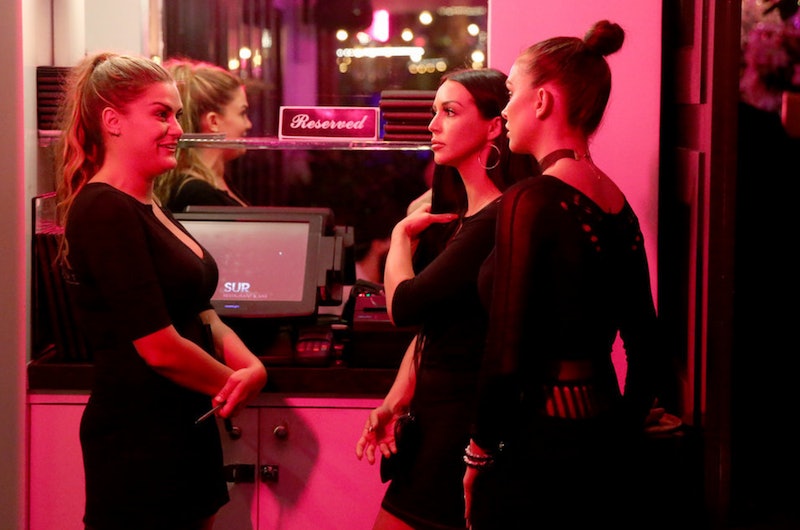 Leave it to Vanderpump Rules star Brittany Cartwright to deal with trolls in the nicest way possible. In a new interview with Glamour, Brittany said she swats mean internet comments away with kindness, letting the social media trolls marinate in their own incivility. Because of course one of the loveliest Bravolebrities ever has figured out a way to put someone in their place while remaining cool, calm, collected, and polite.

"I swear it's mothers who are writing mean things about my looks [the most]. So I've found the best way to get under a cyberbully's skin: If they have kids and they're writing horrible things, just go to their picture, tell them how beautiful their child is, and say that you hope one day their child never has to deal with cyberbullying like I am from you."

Wow. Way to absolutely crush them into smithereens with kindness. Brittany told the publication that this move usually prompts the troll in question to say they are sorry. Hey, why feed the troll when you can teach the troll a lesson and rack up an apology, all without stooping to the troll's level? (Jax Taylor could probably learn a thing or two from his fiancée about keeping it chill online.)

One of the unfortunate side effects of being a Bravolebrity — or any public figure, for that matter — is internet trolls. As Brittany put it in a recent Vogue profile of Vanderpump Rules, the nasty online comments sent the cast’s way are “the worst part of what we do.” Sure, there are a lot of fun and supportive messages about the show and its stars floating around out in the internet, but there are also mean ones. Lots and lots of mean ones. If you would like to feel as though you are snuggled up under a weighted blanket that is actually just a garbage bag full of nails, go ahead and search “#pumprules” on Twitter or scroll through the comments on the cast members’ Instagram accounts.

Whenever she feels worn down by the negative tweets and the Instagram comments, Brittany leans on her friends and family. She hangs out with her dogs, calls her mom, texts her friends she grew up with in Kentucky, goes to church, and vents to her co-stars. Brittany revealed to Glamour that she and the other women of Pump Rules exchange screengrabs of rude comments in their group chat, which has got to be both a cathartic and frustrating exercise. (No decent person wants to see their friend in a social media troll's crosshairs!) Oh, and she also said the group chat is named "the Pumpettes," which I need stitched to the back of a motorcycle jacket lickety-split.

So remember: If for some awful reason you decide you're going to troll Brittany, brace yourself. Because she'll return your serve with a piping hot ball of niceness.