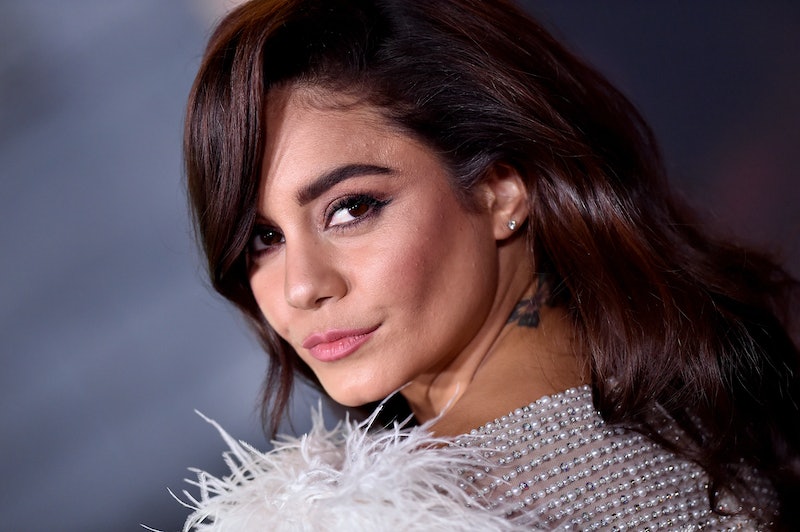 Another celebrity couple has called it quits. Vanessa Hudgens and Austin Butler have reportedly ended their eight year relationship. However, Vanessa Hudgens' post-breakup red carpet look certainly seems to suggest that this actor is #unbothered by all the fanfare around the split.

On Jan. 14, Hudgens attended the premiere of her new film Bad Boys for Life, and she didn't just show up. She showed out. For the event, the the actor wore a dress with a fully beaded top and rows of feathers along with a one-shoulder neckline design that then extended down to her arm. The skirt was made from sheer white fabric that flowed behind her as she walked, and to top it all off, the dress featured a thigh-high slit that Hudgens #worked.

While yes, the outfit, styled by Jason Bolden, was major, the actor's red carpet poses made the look even better. Smiling from ear to ear and working the feathers of her dress, Hudgens gave fans a major 2020 mood. While she has yet to comment on the rumors of her split from Butler, her Bad Boys for Life red carpet moment certainly seems to suggest that split or not, she's living her best life.

Her old Hollywood glam hair and makeup were the perfect accents to the feather-heavy frock.

Just look at her. This is the face of a woman who DGAF about press reports.

Hudgens, however, isn't the only actor to make a major statement on the red carpet after breakup rumors circulated. She's joined by some famous names, even some royalty.

Perhaps the most famous post-breakup look belongs to Princess Diana. The late mother of Prince Harry memorably stepped out following reports of her ex-husband's alleged affair with Camilla Parker-Bowles in what has since been referred to as the "revenge dress."

You know you look good when your dress gets a nickname.

Back in 2017, Bella Hadid had her own moment (even if it was likely in the works for a while). She donned a skin-tight, black chainmail jumpsuit to the Met Gala following her break-up with The Weeknd. The model looked flawless.

One of the most recent cases of stellar breakup fashion? Katie Holmes. The actor reportedly split from Jamie Fox in late 2019, and she emerged in looks that have immediately become iconic. Her matching cashmere cardigan and bra combo? Break-up look goals. The black dress and polka dot tights? Amazing.

While Hudgens' red carpet outfit may not have been a show for anyone at all and just a moment where she was feeling herself (as she should), it doesn't hurt that the look came amid those pesky rumors.

More like this
Important: Anne Hathaway Just Wore A Corset Puffer Coat As A Dress
By Dominique Norman
Vanessa Hudgens Is Reportedly Engaged To Cole Tucker
By Jake Viswanath
Austin Butler Confirms Vanessa Hudgens Pushed Him To Do 'Elvis'
By Alyssa Lapid
Vanessa Hudgens Shades Austin Butler's Elvis Accent With One Word
By Alyssa Lapid
Get Even More From Bustle — Sign Up For The Newsletter
From hair trends to relationship advice, our daily newsletter has everything you need to sound like a person who’s on TikTok, even if you aren’t.