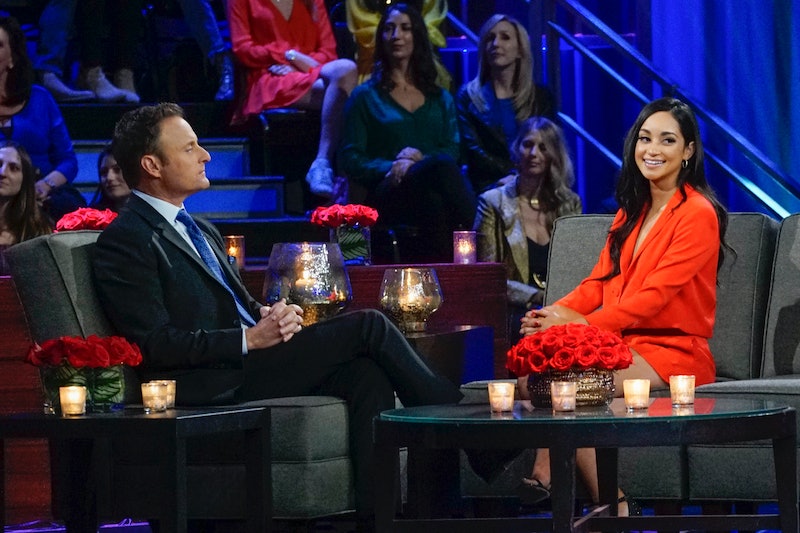 Forget social distancing — it looks like Victoria Fuller wants everyone to know that she's getting pretty cozy with one former Bachelor right now. After weeks of speculation about their budding romance, Victoria F. seemed to confirm she's with Chris Soules in Iowa in her latest Instagram post.

In the snap, the controversial Bachelor contestant poses in what appears to be Chris' living room, rocking a broze satin dress and making a kissy face at the camera. While Victoria didn't tag Chris in the photo, she did caption the post "Farm life," and set her location to Arlington, Iowa — the location of Chris' now-famous farm. In her Instagram Story, Victoria also shared a video of a burning fire pit, which is a romantic compliment to the relationship rumors.

Reports that Victoria and Chris were spending time together in Iowa first began swirling in mid-April, when some Bachelor fans noticed that the couch she was video-chatting her fellow Season 24 cast members on bore a strong resemblance to Chris' sofa. (It can also be seen in the corner of Victoria's most recent Instagram post.) Instagram user @bachelor.tea also noted that the pillows over Victoria's shoulder also matched the ones that Chris featured in a 2017 Instagram post from his living room.

On April 15, Reality Steve claimed on Twitter that Victoria had flown out to Iowa to spend "the week" with Chris — although their quarantine together seems to have last a little bit longer than that. "I don’t know how long this has been going on or how serious it is," he wrote at the time, adding that the pair was "one of the more random Bachelor 'couples' that I can’t say I ever would’ve guessed."

Not long afterward, Us Weekly reported that the new couple connected over social media, after Chris messaged Victoria on Instagram. (According to Bachelor Nation, they have apparently followed one another on the platform as far back as April 2.) "Chris slid into Victoria’s [Instagram] DMs," a source told Us at the time. "He apparently DMs a lot of people."

Despite Victoria's decision to (cryptically) make things Instagram official with Chris, it's unclear how serious their relationship actually is right now. In December 2019, Chris told Us that he had given up on looking for "the one" in his post-Bachelor life, and simply wanted to settle down when he felt it was the right time and with the right person. "I just think you know when you know, when you find it," he said at the time.

"I’m getting old enough to kind of learn that it’s just about, like, when it’s time, it will occur," Chris continued. "I used to [have a plan] a long time ago, but as time goes by, I’m healthy, I’m semi-young, and when I meet the right person, it will be the right time," he explained.

Is it possible that now is the right time for Chris to find love with Victoria? Only time will tell, but one thing is clear — if nothing else, she's found the perfect (selfie) partner in Chris' couch.