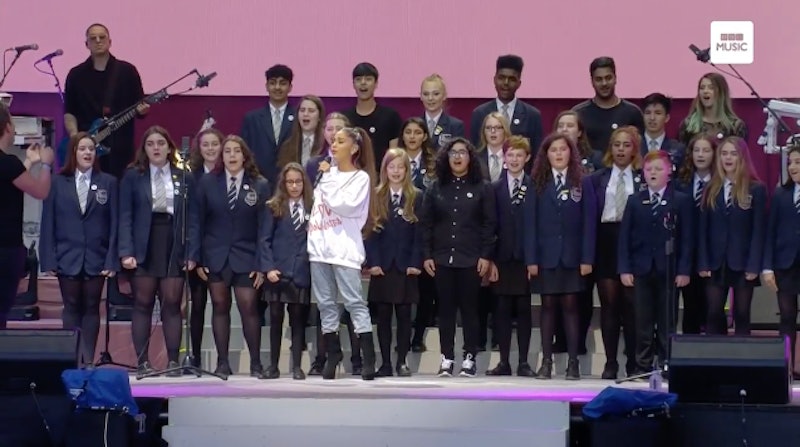 In a moment that will probably bring you to literal tears, Ariana Grande performed with the Parrs Wood High School Choir during One Love Manchester and it was beyond moving. If you're not familiar with the group, these Manchester students released a cover of "My Everything" online that went viral, following the tragic attack at Grande's May 22 concert.

Throughout Sunday's show, big-name musicians like Pharrell Williams, Miley Cyrus, Take That, and Niall Horan have joined Grande on stage. And each performance is touching on its own, but it may just be the Parrs Wood students' song that tugs at your heart strings the most. The group of students performed right alongside Grande herself, as their eyes welled up with tears. Grande also wasn't immune to the moment's emotions either; she began crying as she squeezed a student's hands.

When the Parrs Wood choir first recorded their cover of "My Everything," they shared it on YouTube and raised money via a crowdfunding page to donate to the Manchester attack victims and their families. This only furthers the notion that you're never too young to make a difference and spread love in this world. Seeing the students stand on this stage is proof.

Seriously, this choir is not only talented, but bighearted — and perhaps that's what matters more. Of course, not to knock their beautiful vocals. You can listen for yourself below.

If you feel inspired to support One Love Manchester's efforts, you can visit the concert's website to donate.