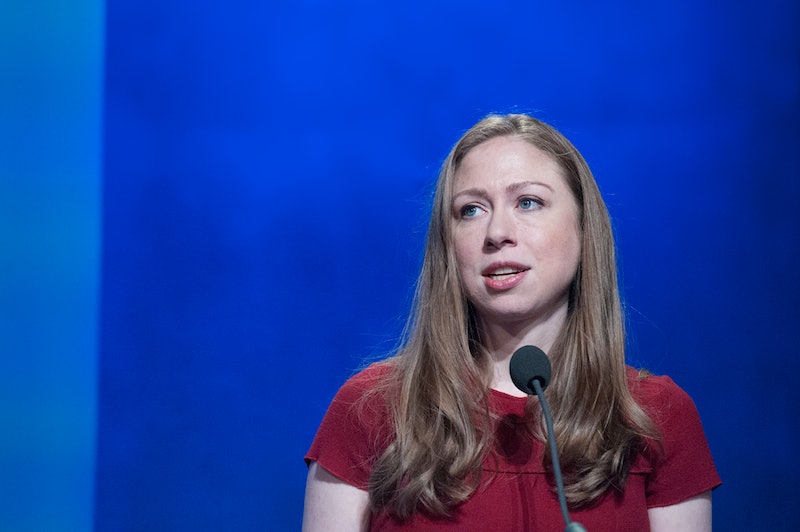 Video of a New York University student confronting Chelsea Clinton at a vigil for Christchurch shooting victims has gone viral, pulling the Twittersphere into debate. In footage of the confrontation, the student can be heard blaming Clinton for two deadly attacks on mosques in Christchurch, New Zealand.

In video shared online late Friday, an NYU student can be heard accusing Clinton of "stoking Islamophobia." The student was reportedly upset that the former first daughter (who cofounded NYU's Of Many Institute for Multifaith Leadership in 2012 and has previously worked for the university) was attending NYU's vigil after criticizing Rep. Ilhan Omar.

"I'm sorry you feel that way," Clinton said in response to the student's accusation. "Certainly, that is never my intention. I do believe words matter—"

"They do matter," the student said, cutting Clinton off. "This right here is the result of a massacre stoked by people like you and the words that you put out into the world. And I want you to know that and I want you to feel that deep inside."

"The 49 people died because of the rhetoric you put out there," the student continued.

According to NYULocal, others gathered around the student could be heard accusing Clinton of having "stoked a genocide" and arguing that Clinton's "Islamophobic rhetoric got people killed." A spokesperson for Clinton tells Bustle her comments on the shooting and her response to the student "stand on their own."

Forty-nine people were killed and dozens more injured in mass shootings at two mosques in Christchurch on Friday. The incident has since been declared a terrorist attack.

Twitter user @vivafalastin, who identified herself as the student in the video, tweeted that it was Clinton's criticism of Rep. Ilhan Omar that had sparked her anger. "The CAUCASITY that chelsea clinton (sic) has showing up to a vigil for the 49 muslims massacred in an islamophobic (sic) hate crime after STOKING ISLAMOPHOBIA AND RACISM surrounding ilhan omar (sic).... fucking ridiculous," she tweeted.

She argued that "by jumping on the right-wing bandwagon & villifying ilhan omar (sic)" Clinton "fed into" the Islamophobic discourse the vigil was organized to protest. What's more, she implies that others were also "uncomfortable" with the former first daughter's presence at the vigil. "All of this stems from the anger and sadness i (sic) felt sitting in a space that was supposed to center me and my fellow muslims in mourning and instead became a space in which non-muslims preached abt (sic) love while turning around and supporting violent campaigns against muslims globally," she wrote in a separate tweet about the incident.

In February, Clinton criticized the language Omar had used to criticize Israel and the American Israel Public Affairs Committee. "We should expect all elected officials, regardless of party, and all public figures to not traffic in anti-Semitism," Clinton tweeted Feb. 10.

Amid mounting criticism from a number of people, Omar apologized for her comments the following day but maintained her criticism of lobbyist groups. She thanked people for educating her on "the painful history of anti-Semitic tropes" and said her intention was never to offend. Clinton then acknowledged Omar's apology on Twitter by thanking the congresswoman for her leadership and adding that she was "looking forward to learning from you and with you, and to our conversation about anti-Semitism, Islamophobia, racism, xenophobia, allyship, bad-faith attacks & more."

Clinton then defended Omar when Vice President Mike Pence attacked the congresswoman, calling her apology "inadequate" and arguing she should "face consequences."

This story has been updated with a comment from Clinton's spokesperson.