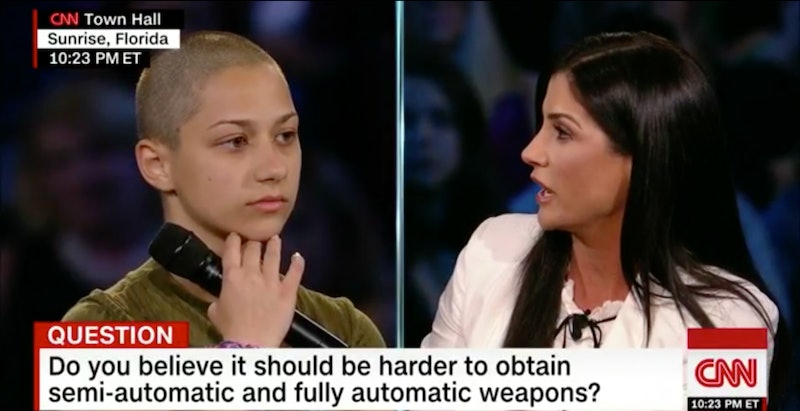 At a CNN Town Hall about the future of gun control, the students of Marjory Stoneman Douglas High School had some choice words for the National Rifle Association. In an exchange between Florida shooting survivor Emma Gonzalez and Dana Loesch, NRA national spokesperson, the Parkland student told Loesch, "I want you to know we will support your two children in a way that you will not."

The town hall discussion was meant to be a constructive way to address gun control legislation after the Feb. 14 mass shooting at Marjory Stoneman Douglas High School left 17 students and faculty dead. The 19-year-old suspect was a former student who had obtained the weapon, an AR-15 rifle, through legal means. After violent events such as this, the usual condolences come in a stream of "thoughts and prayers." But some students are demanding a more active solution — policy change.

Loesch told Gonzalez, a senior, "I'm so proud of you for being so politically active. I was a politically active teen myself, and that's why I'm on this stage right now. Think of how far you can go." But Gonzalez did not seem wooed by Loesch's compliment Wednesday night.

Gonzalez rose to public prominence on Saturday after delivering a passionate speech at a Fort Lauderdale gun control rally. The Parkland shooting survivor-turned-orator had a strong message for politicians:

Gonzalez then appeared on the CNN town hall to ask Loesch if she thinks it should be harder to obtain semi-automatic weapons and modifications, like bump stocks, that make an assault weapon similar to a fully automatic weapon. The NRA spokesperson responded by focusing on mental illness and the Florida shooter's state of mind:

I don't believe that this insane monster should have ever been able to obtain a firearm, ever. I do not think that he should have gotten his hands on any kind of weapon. ... This individual was nuts and I, nor the millions of people that I represent as a part of this organization, that I'm here speaking for, none of us support people who are crazy, who are a danger to themselves, who are a danger to others, getting their hands on a firearm.

The crowd began jeering as Loesch veered into why there was no federal law to "stop mentally insane individuals from getting firearms," arguing that Florida mass shooter was a "madman" who was able to pass a background check.

Gonzalez interrupted to reroute the discussion away from mental illness, calling on Loesch to answer her original question. Loesch pointed out that the NRA has already made its position on semi-automatic weapons and bump stocks known. You can watch the entire exchange between Gonzalez and Loesch on CNN.

The ongoing protest between Parkland students and opponents of gun control expansion has sparked mixed opinions. Some have praised the teenage activists for choosing to speak out. In an interview with CNN, Cameron Kasky, a junior at Marjory Stoneman Douglas High School, told lawmakers that "my message for the people in office is: you're either with us or against us. We are losing our lives while the adults are playing around." In response, conspiracy theorists claimed the Parkland student activists were "crisis actors" — which has been debunked.

Some critics were not happy with Gonzalez's implication that her generation of activists would look out for the safety of Loesch's children in a way that Loesch would not.

Regardless of what detractors think, however, Gonzalez and her fellow students don't seem to be backing down anytime soon. After the Florida mass shooting, students across the country walked out of their schools to demand justice.