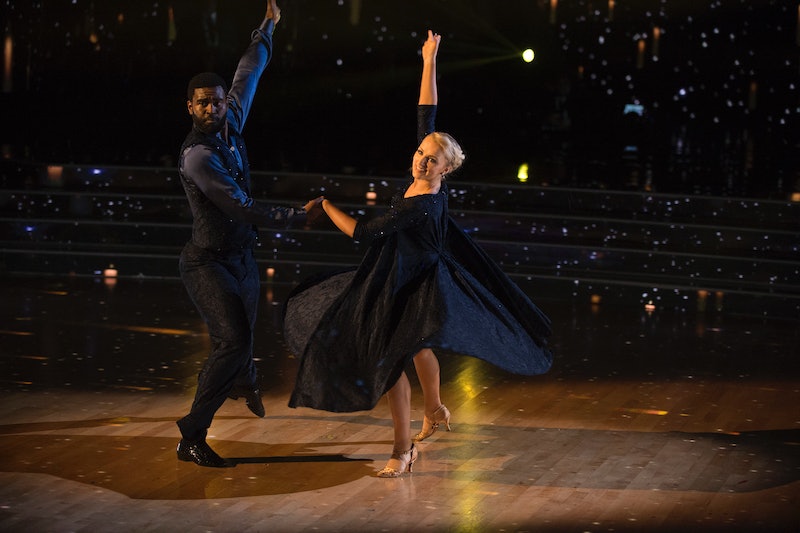 Dancing with the Stars Season 27 is definitely setting the bar as one of the inventive seasons yet. Tasked with incorporating details from their most memorable years into their routines this week, the star-studded cast blew everyone way with their dynamic moves — leaving many in the audience filled with tears. And this video of Evanna Lynch's DWTS performance to the Harry Potter theme song will totally make you grab the tissues, too.

Fans of the Harry Potter franchise will know of Lynch from her early 2000's role as the calm and sweet-natured Luna Lovegood. The Ravenclaw resident and trooper in Dumbledore's army isn't just a fan-favorite for those Harry Potter obsessed millennial, however, but the adorable character was also coveted by Lynch herself far beyond landing the role.

Paired with the tremendously talented Keo Motsepe, the two performed the Vietnamese Waltz to the ever-so-popular Harry Potter theme, and totally owned the night. Their moves were definitely elegant and passionate, and well deserving of the 27 out of 30 score given by the judges. But, the true showstopper was Lynch's reasoning for choosing the John Williams' curated track to get down to.

In the interview shared before the performance, Lynch shared what inspired Monday night's routine. The year was 2006 — when Lynch landed the ultimate gig of bringing Lovegood to life onscreen, and had her wildest dream realized. Before booking the role, Lynch was a huge Harry Potter fan, and cited the J.K. Rowling masterpieces as the push needed to help her beat an eating disorder. In the interview, Lynch said,

"When I was like 11, 12, I was battling an eating disorder. Anyone who's had an eating disorder knows it completely takes over your life. And the only thing that could actually take my attention apart from that was the Harry Potter series."

After falling in love with the books, Lynch reached out to Rowling, and to her surprise, quickly became pen pals with the Hollywood legend. And when landing the role of Lovegood, Rowling was just as ecstatic about the news as Lynch was. "And so I started writing to JK Rowling, and she wrote back," Lynch continued, saying. "And we became pen-friends after that."

Needless to say, paired with her emotional testimony and a great deal of Harry Potter nostalgia, Lynch and Motsepe totally stole the night. And for many, the one-two-punch made them want to support Lynch on her DWTS journey that much more.

Raise your hand if you want to go ahead and book that ticket to Hogwarts, now? Well, if Orlando's Wizarding World of Harry Potter finds themselves with an influx of vistors, they should totally point their fingers at Team Kevanna.