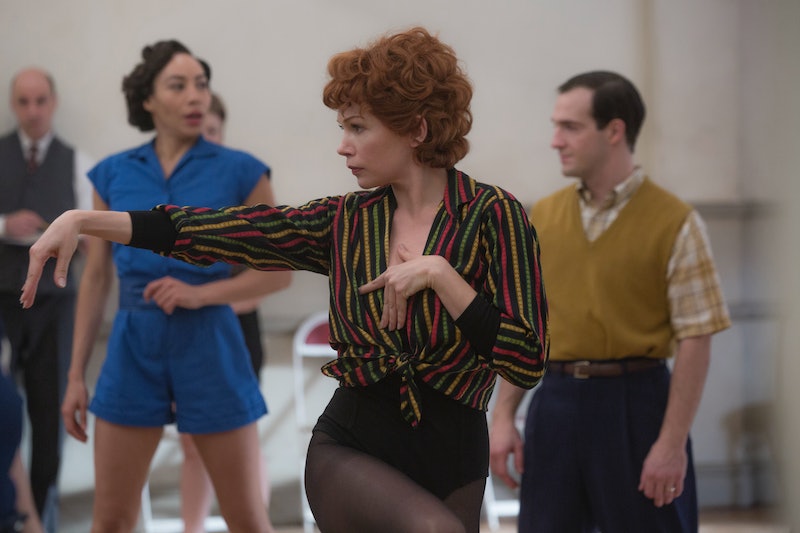 It's likely that every episode of Fosse/Verdon will have you wanting to do jazz hands, but the second episode will also have you proclaiming, "Erp!" That's what Gwen Verdon states in the song "Who's Got the Pain?" from Damn Yankees. Thanks to the film adaptation, video of Verdon dancing in Damn Yankees is available. Since Michelle Williams won't do the complete high-jumping choreography in the Fosse/Verdon episode, you'll want to see the real-life Verdon rock the mambo-inspired moves. And the movie version of the "Who's Got the Pain?" dance comes with the added bonus of choreographer Bob Fosse performing as well — the only time that Fosse and Verdon danced in a film together.

Fosse and Verdon had a long history of collaboration, but it all started with 1955's Damn Yankees on Broadway. Fosse was the choreographer while Verdon starred as Lola, a seductress working for Satan. She is tasked with taking down Joe, who had sold his soul to become a star baseball player for the Washington Senators, but she becomes enamored with him.

As Broadway Direct noted, "Who's Got the Pain?" had "little to do with the plot but was designed by Fosse to show off [Verdon's] talents in ways that the script didn't allow." And while Fosse didn't perform in Damn Yankees on Broadway, he inserted himself into the dance for the 1958 movie. So you can catch Verdon's "Who's Got the Pain?" performance in all its glory — complete with Fosse as her dance partner — in the film.

Although Fosse/Verdon will show how "Who's Got the Pain?" became a part of Damn Yankees, you can read about the creation of "Who's Got the Pain?" in Martin Gottfried's Fosse biography All His Jazz. According to Gottfried, the original closing number of the first act had the baseball players playing musical chairs, led by a player dressed in a gorilla suit. Producer Hal Prince said, "I know the whole thing sounds strange, but it was strange."

As Fosse/Verdon already highlighted, Fosse would get to stage a different gorilla number for his 1972 film Cabaret. But Prince nixed this particular ape-themed number. To replace it, Damn Yankees director and writer George Abbott gave Fosse the idea to do a small, entertaining number that could be part of a show put on by a fan club. So as silly and nonsensical as the lyrics of "Who's Got the Pain?" are, this dance still wasn't as weird as what could have been.

Eddie Phillips was Verdon's fellow "Pain" dancer on Broadway, but Fosse took over the role for the movie a few years later. That included a brief speaking part for the choreographer, as well him singing the Latin-styled song. How this rather random number is explained in the movie is that Lola has created the "I Love Joe" fan club and she performs it with a dance partner at "Joe Hardy Night."

In the Damn Yankees movie, "Who's Got the Pain?" is the third number to feature Verdon. Lola's big introduction comes in "A Little Brains, A Little Talent," which she sings to her boss Applegate (AKA, Satan). Then, she tries to seduce Joe with the iconic song, "Whatever Lola Wants." Those two numbers from the movie are available on YouTube. Lola also performs a number with Joe toward the end of the movie, "Two Lost Souls," and a portion of that is available through Twitter. (Though it's worth seeking out the film for the full performance of "Two Lost Souls" since it features another incredible dance sequence performed by Verdon.)

"A Little Brains, A Little Talent"

In the Fosse-focused episode of Great Performances: Dance in America Verdon reflected on dancing with him for "Who's Got the Pain?" She said it was "wonderful" but also how it was hard work. "They talk about jet streams where you just coast and you don't feel the energy — you wouldn't even know you were tired until you stopped," Verdon said of the stamina needed for this high-jumping number. And you've got Damn Yankees the film to thank for providing the pain-free experience of watching Verdon and Fosse showcase their sky-high talents together.