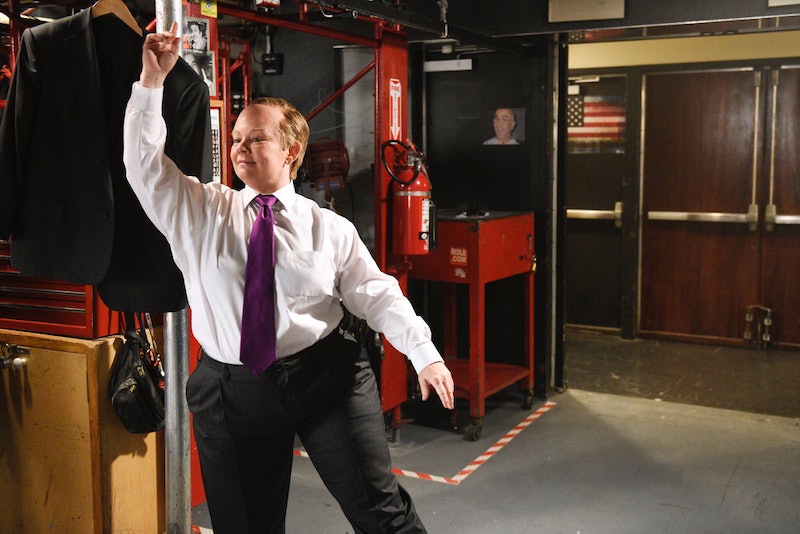 I don't know about you, but I've been entranced by the videos popping up on Twitter of Melissa McCarthy, as Sean Spicer, riding a podium through the streets of New York City. McCarthy's gloriously wacky stunt was reportedly being taped as part of a skit for her fifth Saturday Night Live hosting gig. There's little in the way of details about what exactly this skit will be about, but man, do I like the cut of this skit's jib. The mere fact that these various McCarthy-on-a-podium videos are hilarious enough to have spawned a huge reaction on Twitter and across the internet is probably the only reason I'm saying "TGIF" today.

Never mind that McCarthy's podium riding shenanigans are the stuff of GIF and meme dreams. There are so many ways you could apply this video to the cultural practice of GIF and meme-making that I'm basically waiting with bated breath while the great minds of the internet come up with ways to spin this video into gold.

What's really catching my attention, in an almost mesmerizing fashion, is that one lone Twitter user has seen the potential greatness of these videos and turned the magic dial up to 11.

After CNN Money's Elana Zak went onto the streets of NYC to film McCarthy scooting around via podium, Twitter user Taylor Maycan saw a prime opportunity to adding a song to the video to really make it pop.

Maycan's addition of the classic '00s hip-hop jam "Ridin' Dirty" really adds a certain layer of greatness to the video, doesn't it? Like, it's so apt and so appropriate in its tone that it only makes this video of McCarthy on a podium that much better. Oh, not to mention, "Ridin' Dirty" is a pitch-perfect and hilarious choice of soundtrack song.

All I know is that on this otherwise spectacularly worrisome Friday, McCarthy and the internet have served up some much-needed LOLs.