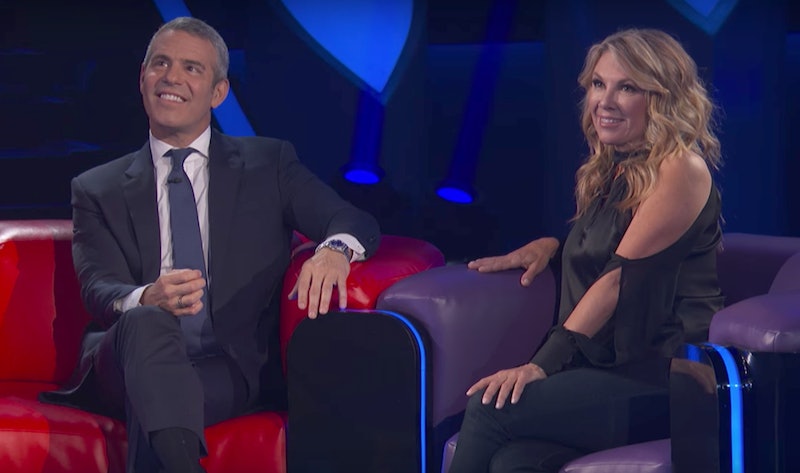 Did Real Housewives of New York City fixture Ramona Singer find new romance on Love Connection? Maybe. Did she find endless breadstick love in an endless breadstick place? Sure seems like it. On last Thursday's episode of Fox's reboot of the dating show, Singer chatted with fellow Bravolebrity Andy Cohen about the three dates she went on before the episode. And you better believe she brought her Ramon-A game.

While out with each of the suitors, the Bravo star was careful to not bring up a little program called The Real Housewives of New York City; “I don’t do that with anybody that I like,” Singer explained to Cohen. “I want them to like me for me.” However, that’s not to say the Ramona coaster didn't make an appearance: Singer tells one contestant he’s “full of sh*t” when he reveals his first impression of her; she lifts herself out of her chair to laugh in Cohen’s face about the “Ramona Renaissance”; and she punctuates many sentences with her trademark cackle.

And yes, she might've met someone she dug. In a recent interview with Entertainment Tonight, Singer revealed that she was into one of the contestants. She said,

“I definitely met someone I'd like to go out with again, so I think that starts something, right? don't like to put a jinx on anything, I take every day at a time. But the fact that I'm willing to go out with someone again says a lot.”

As for the biggest takeaway from the episode? It would appear as though her date with Mark was her first visit to the Olive Garden. Ever.

*Grabs magnifying glass.* *Gives clues a long, hard look.* *Craves Olive Garden breadsticks.* Hey, even if she didn’t find true love on this game show, at the very least, she finally got to experience the unrivaled euphoria that is enjoying a meal at the Olive Garden.

Long live the Ramona Renaissance. May the laughter be plentiful and the breadsticks never-ending.