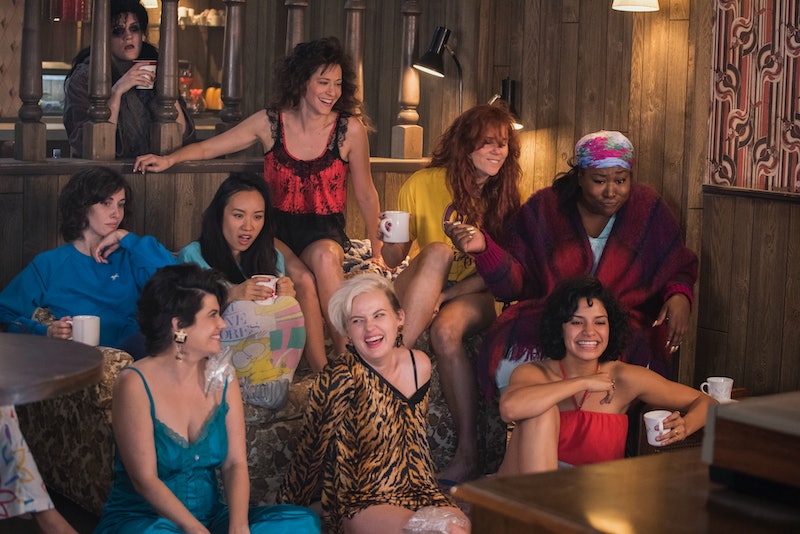 GLOW returns to Netflix for Season 2 on June 29, and now that the ladies have gotten their pilot on the air, the show promises to include even more over-the-top wrestling matches. Fans of the original Gorgeous Ladies of Wrestling, or even just those who are curious about the program, will be pleased to know that the Netflix comedy is fairly accurate. The show is a spot-on match for videos of the original GLOW, proving that the Netflix series has captured the spirit of the '80s phenomenon.

Viewers looking to know more about the real-life women's wrestling show might want to check out a documentary on Netflix called GLOW: The Story Of The Gorgeous Ladies Of Wrestling. The documentary gives fans of the fictional series a taste of what the original show was like, complete with clips and plenty of interviews with the original wrestlers. It's also a good measure of what the Netflix show gets right about the original series, which ran from 1986 to 1989, and what's been dramatized.

Of course, Netflix's GLOW is a fictional comedy at the end of the day, and the characters are not exact matches for real female wrestlers of the time. But from the clips of the '80s series on YouTube, it's clear that Netflix's GLOW has captured a lot of the sensibilities of the original. The original pilot from 1985 is below; the only things missing are the retro commercials, unfortunately.

About a quarter of the way through the episode, Spanish Red takes on Americanah in a match that is reminiscent of Liberty Belle's ringside arguments with Zoya and Welfare Queen. "I respect the red, white, and blue," says Spanish Red, "but I can't stand all of this apple pie stuff, because I didn't have apple pie growing up. I had other things." Americanah tells her to speak English. It's social comedy wrapped in low-brow entertainment, just like the wrestling show the ladies put together in the Netflix series. Even the announcer ("No wrestling, just verbal insults") is reminiscent of Chris Lowell's Bash and his dry, enthusiastic way of calling the matches.

What else did the original GLOW ladies do? Lots of rapping, music videos, and comedic sketches. In the documentary, one of the women describes the show as more like vaudeville theatre than anything else.

Check out the real characters in the rap below as they introduce themselves — Palestina is reminiscent of Sunita Mani's character Beiruit on the Netflix series, and the Housewives in the original have a similar vibe/banter to the fictional GLOW's Edna and Ethel Rosenblatt, also known as the Beatdown Biddies.

Here's a chaotic group match, where 21 women compete for $10,000. Just like on the Netflix series, the ropes on the ring are pink.

And you have got to see Soul Patrol in this tag team against Americanah, again, and Debbie Debutante.

One great aspect of these clips is that every single one of these wrestling characters raps her intro. It's also worth pointing out that in the clip above, the commentator is a woman. No offense to Bash, but that would be nice to see eventually on the Netflix series as well.

It's easy to fall down the GLOW rabbit hole on YouTube, and it's worth the time. There's even a video that's just GLOW Season 1 raps, if you're only interested in that aspect, or a sketch with the women in the locker room about a character named "Jailbait" who tries to seduce a referee. Watching GLOW on Netflix is only one part of the real GLOW's story — thankfully, videos like these help preserve the show for fans new and old to enjoy.