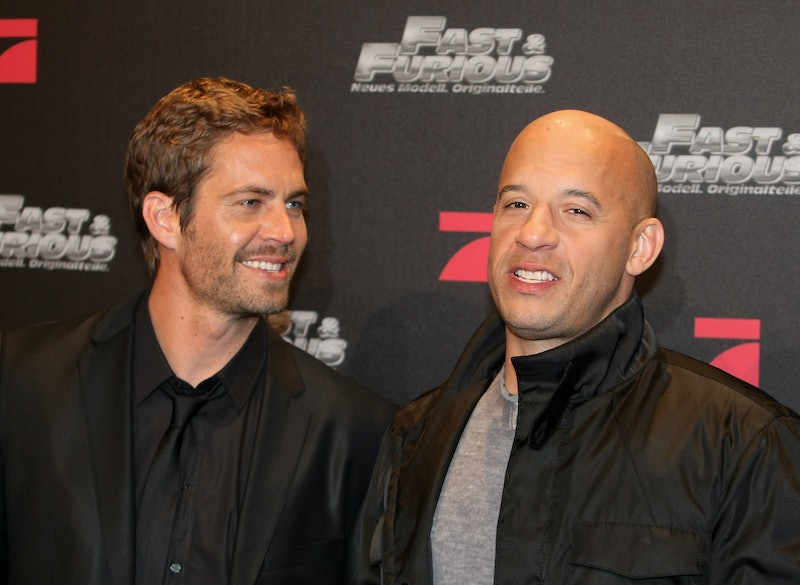 It's been almost six years since his death, but as Vin Diesel's birthday tribute to Paul Walker shows, Walker's legacy lives on through his family and friends. The Fast and the Furious actor would have turned 46 on Sept. 12, and his co-stars and family members are using the day to celebrate his memory. Diesel, who is currently filming Fast & Furious 9, shared a lengthy Instagram post on Thursday that shows how his late friend is still inspiring him every single day.

Diesel's moving post addressed Walker directly. "So much to tell you... so much to share... as you know, we have been filming in Scotland," the actor's tribute began. "We threw a party for the crew last night in appreciation for all of their hard work. It was one of those moments that so often in the past we were together smiling and getting everyone drunk, especially Justin [Lin]. Haha. Who by the way would make you so proud with what he is accomplishing with this film."

The Fast and the Furious actor continued by sharing how he and Walker would have spent his birthday if he was still alive. "Normally today I would be planning how to embarrass you with a birthday cake," Diesel wrote. "Haha. Instead I reflect on how lucky I am to call you my brother. The tears never go away, but they change... from that of mourning to that of grace. We only hope to make you proud. Speaking of which, guess what message I woke up to... your daughter. Meadow sending me love on this day. Wow, she knows me so well. She has your heart. Happy birthday... it's amazing, but somehow you continue to make the world a better place."

Walker died in a car crash during a break from production on Furious 7 on Nov. 30, 2013. Per US Weekly, he was on his way home from an event for the charity he created, Reach Out Worldwide. According to their website, Reach Out Worldwide is "an agile group of first-responders and other professionals in the medical and construction related fields who augment local expertise when natural disasters strike in order to accelerate relief efforts." Walker founded the nonprofit in 2010 after an earthquake left Haiti devastated. The nonprofit continues to provide crucial support during natural disasters, and is currently helping the victims of Hurricane Dorian.

That's one tangible way that Walker has continued to make a positive impact on the world, but his influence can also be seen in the many tributes his co-stars and family have shared on his birthday. In addition to Diesel, several of the actor's other Fast and Furious co-stars shared their love for the late actor on Instagram. Jordana Brewster wrote about how much she missed Walker's laugh, director Lin shared a video from the Furious 6 set, and the actor's daughter, Meadow, shared a simple happy birthday message for her late father.

Additionally, Dwayne "The Rock" Johnson posted a message that read in part, "It’s Paul’s birthday and rightfully so, his legacy celebrated around the world. Our friendship was bonded over our daughters, Meadow & Simone and the pride and protection we took being their fathers. And recently, I got a scare when I almost lost another friend on the road.All this stuff got me thinking about how beautiful, yet wildly unpredictable life is. We never know what’s around the corner, so we gotta live as greatly as we can in the honor of our loved ones and ancestors who are no longer with us. Manuia le aso fanau, my friend." (The Rock's friend and Jumanji co-star Kevin Hart was recently involved in a car accident on Sept. 1.)

Although he's no longer here, Walker's positive influence and big heart can be seen in the beautiful legacy of love and charity that he left behind.

More like this
Lindsay Lohan & Jonathan Bennett Celebrated Mean Girls Day Very Differently
By Jake Viswanath
What Is Miles Teller’s Net Worth? The 'SNL' Host's Bank Account Is No Joke
By Meg Walters
Lin-Manuel Miranda & Tituss Burgess React To 'Little Mermaid' Casting Backlash
By Radhika Menon
An Extremely Messy Ranking Of What Actually Happens In 'Don't Worry Darling'
By Chloe Foussianes
Get Even More From Bustle — Sign Up For The Newsletter