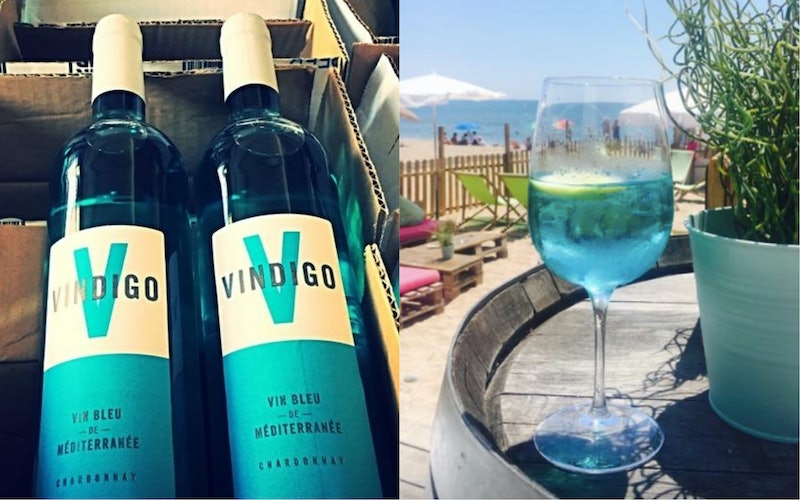 Did you think that uniquely-colored wine was just a brief and momentary fad? Think again — because Vindigo, a new blue wine, has arrived, and it’s making waves that are just as big as they were the last time we saw such a colorful boozy creation hit the internet. Created by a Frenchman and produced in Spain, Vindigo has a sweet, fruity taste and a delicate hue that’s closer to turquoise than to royal blue — so naturally, everyone is obsessed with it. I mean, how could we not be? It's just so pretty.

Vindigo is not, of course, the first blue wine ever created; it’s not even the first one to go viral. Gik, a blue wine from Spain, made the internet lose its collective cool when word of its existence first arrived in 2016; Blumond, a blue bubbly, followed just under a year later; and if you just search ye olde Google for “blue wine,” you’ll pull up a whole bunch of different options, including Blanc de Bleu Cuvee Mousseux and Marques de Alcantara Blue Chardonnay.

Interestingly, though, blue wine ran into some trouble in the European Union not too long after Gik announced its presence: Due to the fact that “blue wine” is not one of the 17 categories of wine listed under EU law, it was determined that blue wine… can’t call itself “blue wine.” In the EU, it must be referred to as “99 percent wine and one percent grape juice” and marketed under the heading of “other alcoholic beverages,” according to Forbes.

(The wording doesn’t appear to be an issue in the United States, though; indeed, Gik can be ordered online and shipped to 30 states now, despite the fact that all of its product copy on the U.S. site calls it “blue wine.” Go figure.)

But if anything, the sudden fame of Gik and its ilk proved that there was, in fact, a market for blue wine — which is where French entrepreneur René Le Bail comes in. The creator of Vindigo, he actually had trouble finding a winemaker in France who would deign to make his wine, reports the Telegraph; so, he moved production to Spain (yes, Gik’s homeland) — but has managed to drum up a market in France: Vindigo is currently for sale in the French port city of Sète.

The wine itself is a Chardonnay; speaking to the Guardian, Le Bail said that it’s a fruity, “festive wine” with notes of cherry, passion fruit, and blackberry. The Telegraph, meanwhile, noted that its “sweet, mild taste” made it “a popular aperitif or cocktail drink,” as well as something that would likely pair well with seafood. It’s about 11 percent alcohol, which Le Bail described to the Guardian as “not a super strong wine.” (According to Wine Folly, the average ABV for a glass of wine, particularly those from Europe, is somewhere between 11.5 and 13.5 percent; American wines, however, tend to fall in the 13.5-to-15-percent range.)

As for how it gets its color? Easy: Red grapes. Red grapes, you see, are one of the many fruits and vegetables that contain anthocyanins — an antioxidant that also functions as a brilliant plant pigment. The colors they create are usually blue or purple; indeed, other familiar food items in which anthocyanins are present include blueberries, blackberries, raspberries, and black soybeans. According to the Guardian, the Chardonnay that makes up Vindigo is “filtered through a pulp of red grape skins” during the winemaking process, which gives the beverage its vibrant color.

And, to be honest, that makes perfect sense to me. Have you ever rinsed out a glass you used to drink red wine and noticed that the water turns blue when it hits the dregs at the bottom of the glass? I’ve observed this somewhat curious phenomenon quite a few times — which I can only assume means the reds I drink are made from grapes that are high in anthocyanins. When the dregs are diluted in water, the anthocyanins make the resulting solution look blue.

Le Bail eventually hopes to sell Vindigo in Bordeaux, often said to be the wine capital of France — and, thinking even bigger, he also hopes to shift production back over to France itself at some point. In the meantime, though, the wine is continuing to sell in Sète, as well as in Spain; the company is also taking orders via the Vindigo Facebook page. According to the Telegraph, requests for the wine are flying in from a good deal of other countries, including Britain, Italy, China, Belgium, and Indonesia. It’s not clear where Vindigo is cleared to ship, but a bottle costs 12 euros, or around $14 USD; you might try reaching out via Facebook if you’re interested in trying it, but a) be prepared to wait a while for a response (they’re a bit overwhelmed right now, apparently), and b) be prepared to the answer to the question, “Do you ship to the United States?” to be, “Alas, no.”

In the meantime, at least we can live vicariously through everyone else’s blue wine Instagram posts. Right? Right.

This piece has been updated to clarify the situation surrounding Gik and EU wine labeling laws.