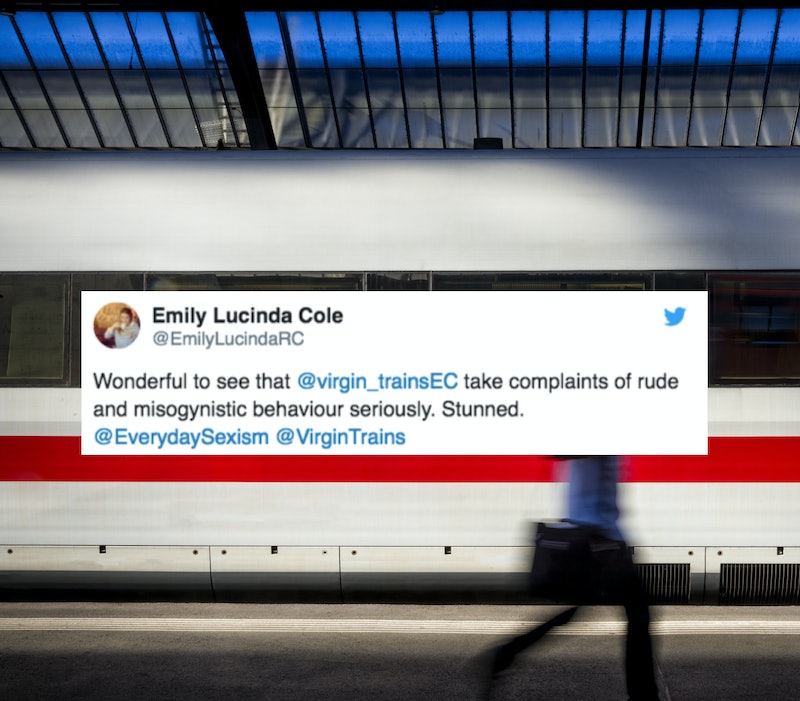 And today in Things To Fuel Your Feminist Rage In 2018, we have this: When a woman in the UK tweeted about an alleged incident of sexism she said she experienced on a train on Virgin Trains’ east coast route, what she received in response was a sexist tweet from the British train company that just made the whole thing even worse. Virgin Trains later deleted the tweet and issued an apology on Twitter, saying, “We apologize unreservedly for this tweet and any offense that it may have caused. To avoid causing more offence we have deleted the original post." When reached by Bustle for further comment, a spokesperson for Virgin Trains on the east coast route reiterated this apology.

Emily Lucinda Cole, who tweets under the handle @EmilyLucindaRC, was taking the train from Edinburgh, Scotland to London where she lives, according to the BBC. The train was packed, and as a result, Cole claims that, prior to departure, employees for the train company allegedly told passengers they could sit in the first class coach for the price of the weekend upgrade. However, after the train left the station, Cole says that passengers were then allegedly told by employees that this had been a mistake and that they would all have to move. When Cole “politely and honestly” explained the situation to an employee checking her ticket and said that she wanted to lodge a complaint, she alleges he told her, “You go ahead, honey” in an “aggressive” tone.

At that point, Cole tweeted about the incident, tagging Virgin Trains East Coast’s Twitter handle (@Virgin_TrainsEC) along with it:

And, unfortunately, that’s also where the situation went from bad to worse: A now-deleted tweet sent from the @Virgin_TrainsEC Twitter handle in reply to Cole’s complaint read, “Sorry for the mess up Emily, would you prefer ‘pet’ or ‘love’ next time?”

Cole took a screenshot of the tweet prior to its deletion and tweeted that out, as well, this time tagging not only Virgin Trains East Coast’s Twitter handle, but also the general Virgin Trains handle and @EverydaySexism, which documents daily incidents of sexism, harassment, and assault to show how widespread and pervasive the problem is.

Roughly two hours after Cole’s tweet of the screenshot went out, @Virgin_TrainsEC deleted the tweet and issued an apology:

When reached by Bustle for comment about both the original alleged incident and the subsequent tweet, a spokesperson for the east coast route of Virgin Trains repeated this apology, stating, “We apologize unreservedly for this tweet and for the offense caused. To avoid causing more offense we have deleted the original post.”

There are — predictably, but still upsettingly — a number of responses to Cole’s first tweet documenting what she alleges she experienced on the train that brush off the inappropriate use of the word “honey” as “just the way things are” and “not a big deal.” Said one Twitter user, “I can understand where they’re coming from. I don’t think they meant it maliciously. They’ll have been trying to come across friendly/a bit more sincere to diffuse a situation. You also forget older generations use different words to us. It’s normal to them.” Said another, “Jesus, as if there isn’t more important things to worry about. Doubt he meant any harm at all.” Yet another commented, “In the north Yorkshire/Lincolnshire love/pet/duck are used as terms of endearment to males and females. It's meant warmly, not to patronize. Sorry you feel that way.”

It’s worth noting, by the way, that many of those types of responses came from men.

(Also, whenever anyone uses “male” or “female” as a noun, they immediately turn into Ferengi in my eyes. Maybe that’s just me, but... just throwing that out there.)

But here’s the thing: As many other users thankfully pointed out, using patronizing language when speaking to women shouldn’t be “just the way things are.”

Because — particularly in this context — it’s not a term of endearment:

It needs to stop:

And men telling women how they’re supposed to feel when they’re on the receiving end of sexism, whether it’s of the everyday variety or not, needs to stop, too:

While we’re on the subject, now’s a good time to remember that it’s not OK going the other way, either:

Nor should this be acceptable:

I'm not saying the customer is always right — as anyone who has ever worked in a customer-facing position can tell you, they're often not — but staff and employees do have a responsibility to remain professional when interacting with customers and clients. And sexism (and racism, and homophobia, and transphobia, and every other form of belittling behavior you can think of) has no place in a professional interaction, no matter how friendly you think it might be.

I suppose at least plenty of folks realized how inappropriate the “Would you prefer ‘pet’ or ‘love’ next time?” tweet was right off the bat:

And at least Virgin Trains apologized for it. So, y'know, there's that.

It’s clear, though, that we still have a long, long way to go when it comes to fighting sexism. It’s so deeply ingrained in our world that things like this — both the original alleged incident and the now-deleted tweet — are still seen as acceptable by a wide number of people, even now. Calling it out when we see it helps — and we all need to do better in practice, too.

Here’s hoping we make more progress along those lines in 2018.

More like this
How To Fight For Reproductive Rights, Based On How Much Time You Have
By Courtney Young
8 TikTok Pasta Recipes To Try Out At Home
By Emma Garza
TikTok’s “5-9 Routine” Trend Is Here To Boost Your Productivity
By Courtney Young
What Is "The Ick?" The TikTok Dating Term, Explained
By Courtney Young
Get Even More From Bustle — Sign Up For The Newsletter