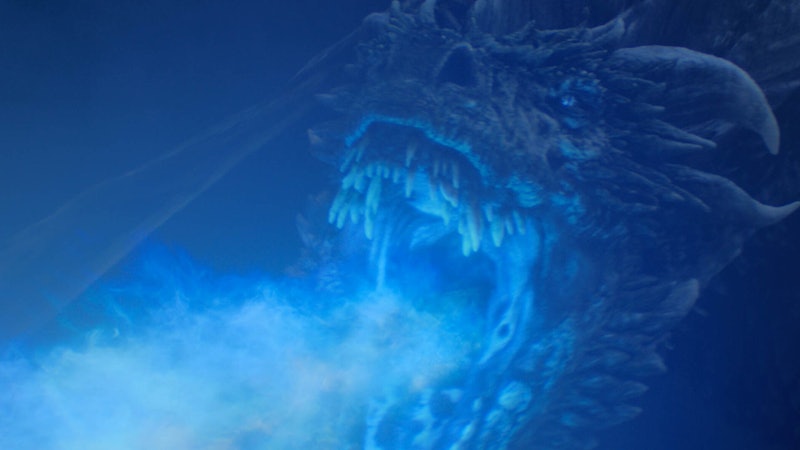 Ever since the Night King and his army ended up with one of Daenerys' dragons, fans have been waiting for the moment that the Mother of Dragons would come face to dace with him once more. And the moment didn't disappoint, as Viserion's ice fire on Game of Thrones was exactly as terrifying as fans thought it would be.

Dany (Emilia Clarke)'s beloved dragon met his tragic fate during a fight with the Night King's Army of the Dead in Season 7, after Jon (Kit Harington) took her into battle with him so that she could see the danger of the White Walkers herself. As part of his quest, Jon also intended to capture a wight in order to bring it back to King's Landing and show Cersei (Lena Headey) definitive proof that there was a growing threat beyond the Wall. However, that was easier said than done, and in the midst of the fighting, the Night King plunged a spear into the heart of Viserion, killing him.

Of course, fans then saw the Night King pull Viserion's body from the icy depths to which it plunged, where he proceeded to bring it back from the dead and turn it into the most terrifying creature in all of the Seven Kingdoms: an ice dragon. And now that he was facing off against Dany's other two dragons in the Battle of Winterfell, the Night King made sure to show off just how much scarier Viserion had become since his death.

Viserion first made his presence known during a fight with his brothers, Rhaegar and Drogon, and his ability to breathe bright blue ice fire seemed to turn the tides against the people of Winterfell. After all, the Night King used Viserion's ice fire to extinguish the trenches that had been lit on fire in order to create a boundary to protect Winterfell from the Army of the Dead. And, since fans know that fire is the most effective way to kill wights, it seemed to spell disaster for the people inside the castle, since they couldn't rely on the flames to help keep the Night King away.

The dragon's ice fire also seemed as if it would be the thing to take down Jon Snow near the end of the battle, as Dany's dragons had been unable to use their own fire to burn their former brother. However, the most terrifying part of Viserion's existence is the fact that he was now only loyal to the Night King, and was willing to kill his mother in battle. Fans had seen Viserion destroy the Wall at the end of Season 7, which means that he had the power to destroy Winterfell entirely, wiping out all of the people in battle and killing all of the women and children hiding in the crypts, if the Night King so commanded.

Thankfully, Arya killing the Night King seemed to stop Viserion from destroying Winterfell singlehandedly — and saved Jon from certain death, as he was facing off against the dragon with nothing but a sword to help him — and more importantly, means that the dragon that Dany raised and loved can finally be mourned and remembered for the terrifying, fire-breathing pet that he was.