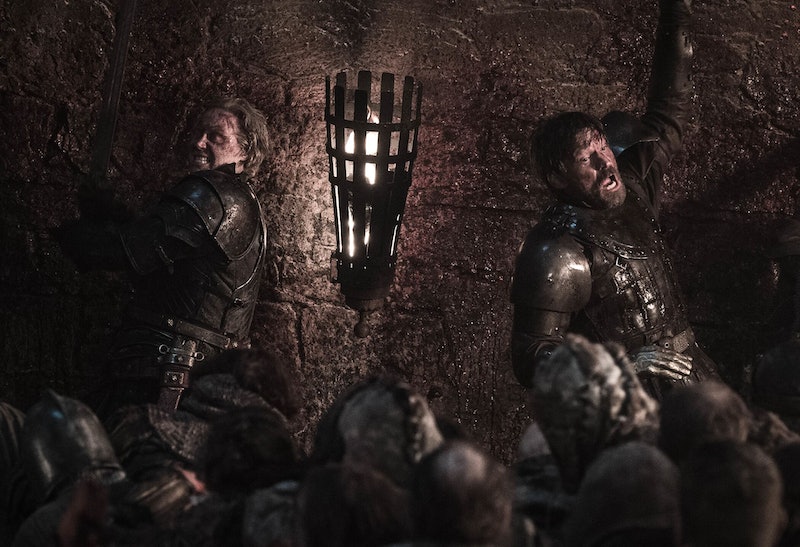 All men must die, but what about those who are already dead? In Game of Thrones' April 28 episode, the Night King's impossibly large army attacked the Stark home in the much-anticipated Battle of Winterfell. And while the humans had an impressive plan of attack, that didn't stop the undead from forming a body bridge over the flaming trenches around Winterfell. So did fire kill the wights on Game of Thrones, or did they turn out to be somehow fireproof?

As Gendry said in last week's episode, the White Walkers are like death itself. But since they're not really alive, they're notoriously difficult to kill. That said, the humans have discovered two ways to kill them — dragonglass and/or Valyrian steel to the heart. However, these are wights, and are fortunately a bit more killable than the Night King or his White Walkers.

Fire is a great wight-deterrent, however, which is why Melisandre (who showed up after disappearing in Season 7) lit the trenches surrounding Winterfell on fire. And while it didn't stop the wights, per se, it did slow them down. Not for long, however, since the Night King stretched out his hand, presumably directing the wights to begin walking into the flames. The undead began putting their bodies down and forming a sort of bridge across the fire. And while some wights were killed, the majority were able to get through unharmed, walking across their fallen comrades bodies.

This was the Lord of the Rings equivalent of the orcs blowing up the drain hole at Helm's Deep, allowing them to spill into the castle. But whereas Sauron had a massive bomb, the Night King had mind control powers (and a zombie dragon).

So while wights can definitely be killed with fire (and many are throughout the course of the Battle of Winterfell, between Melisandre's flames and Dany's dragons), the bodies acted as a fire extinguisher of sorts. It would be vaguely sad and poetic that these wights so selflessly laid down their lives if they weren't mindless zombies.

While the wights themselves are dumb, it's notable that the Night King is controlling their actions, making them scarier than your average walking dead. And there's strength in numbers, so the sheer size of their army made them formidable, even though they could be picked off easily one by one.

And, to add insult to injury, the Night King reanimated Winterfell's dead soldiers as wights, with just a flip of his wrist. These included our fallen heroes like Lyanna Mormont of Bear Island, and Dolorous Edd, whose eyes tragically became blue. As some fans pointed out, this was like putting salt in an extremely fresh wound.

Also miraculously raised from the dead? All of those corpses down in the crypt that everyone kept saying was the safest place to be. Thankfully, their mindless, murderous rampage was cut short when Arya stabbed the Night King with her Valyrian steel dagger, stopping all of the wights, White Walkers, and even zombie-fied dragon in their tracks.

So while the wights were able to fearlessly and mindlessly break through the fire, it was bound to happen eventually. It would have been an incredibly lame Battle of Winterfell, otherwise, so it's perhaps best that they did. But pour one out for the Red Woman, who doubtless saved countless lives with her tactics before losing her own.