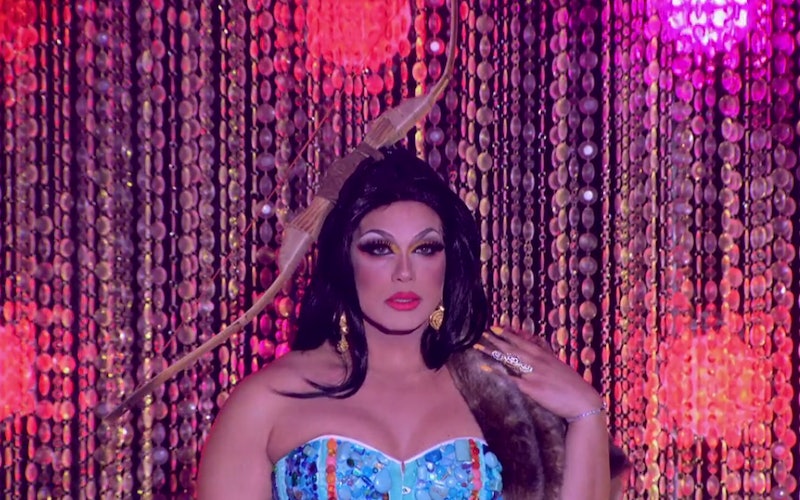 With the pressure mounting, and the remaining top five contestants baring their claws in competition with each other, Friday night's episode of RuPaul's Drag Race was full of tension. But it wasn't just the shady workroom and offhand sniping that made it such an uncomfortable watch at times; there was also the matter of Alexis Michelle's Native American-inspired outfit. Created for the Village People category of the episode's "Gayest Ball Ever," Alexis' outfit was in homage to Felipe Rose — the Native American member of the Village People. However, as soon as the episode aired, many fans online became upset, voicing their opinions that Alexis' outfit was cultural appropriation on RuPaul's Drag Race. Bustle has reached out to a VH1 representative for comment, but is yet to hear back.

Of course, appropriating other cultures for fashion purposes, or for use as a costume, is considered by most to be deeply distasteful and offensive. The cultural appropriation of Native American culture, in particular, has been a hot topic in the US for a long time now. In recent years, it's become more socially accepted that Native American culture shouldn't be exploited for fashion purposes, to the point that many music festivals have banned head dresses from being sold, or worn, by people in attendance.

Some may argue that Alexis' outfit wasn't cultural appropriation as it was simply a re-imagining of a specific member of The Village People, rather than a direct take on a culture. Some on Twitter brought up the fact that Alexis' outfit actually lacked any Native American influence to make it feel culturally insensitive in the first place:

However, that all feels disingenuous, in my opinion. The fact remains that there are six members of band, and only five contestants that did this particular challenge. As many people on Twitter pointed out, the situation could have been easily avoided had the Native American outfit not even been optioned for the runway category.

Instead, the iconic Sailor could have been the Village People look to take its place. And personally, I feel as though that misstep speaks volumes. It especially feels this way when you judge the outfit along with the deeply problematic and casual commentary that accompanied it. At one point, Alexis jokingly hung a dreamcatcher from her ear and called it her earring, while in another moment, she joked, "I wanna give something that'll feel a little bit tribal, but also ready-to-wear," in a manner that felt blithely disparaging against Native American culture.

While critiquing her on the runway, RuPaul stated the truly eye-roll worthy line, "Your Native American couture... left the judges with reservations." All of which is incredibly disappointing, not to mention cringe worthy, to hear in 2017. It isn't just ignorant, but it's lazy to have to rely on exploiting another culture, and taking cheap pops at it, in order to raise a chuckle.

Since the show's debut in 2009, fans and critics have repeatedly raised concerns over issues of cultural appropriation on RuPaul's Drag Race. In Season 3 of the series, Raja (who would go on to win) wore a full Native American head dress and mimicked stereotypical Native American communication by raising her hand and saying, "ho," at the judges. The runner up of that season, Manila Luzon, courted similar controversy when she created a bogus character with a troubling, stereotypical Asian accent during a newscaster challenge.

Alexis' outfit might not have been quite as blatantly offensive as Raja's was, but that doesn't mean it still wasn't insensitive and unnecessary. While drag should most certainly be allowed to be campy, fun, raucous, and wild (without apology), there are still certain boundaries, and sensitivities, that should be considered with each look, and performance. And sadly, on Friday night's episode of Drag Race, that boundary was once again crossed. Make no mistake, this was definitely cultural appropriation, and the show can do much better than it.