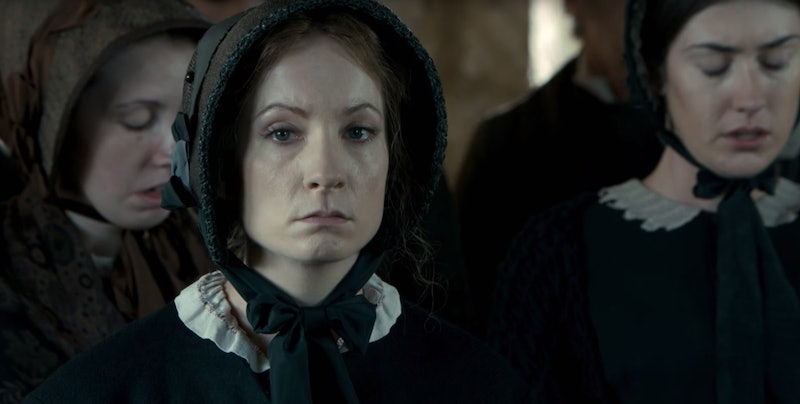 Initially broadcast in 2016, ITV's Dark Angel brings the story of one of Britain's first serial killers to life in a chilling two-part drama. Mary Ann Cotton, a nurse and dressmaker from the North East began her killing spree in the mid-1800s and became known for her signature weapon of choice — arsenic. But was Mary Ann Cotton ever caught, and was she held responsible for the crimes she committed?

As news site ChronicleLive reports, Cotton lived a relatively normal life until 1865 when her first husband and four of their children died of gastric-related illnesses. This trend seemed to continue with her next three husbands, but, as the Telegraph reports, in May 1872 a parish official reported her to the police following the death of her seven-year-old stepson Charles Edward. Cotton was living with the boy at the time, and before his death, the parish official asked whether she planned on marrying her would-be fifth husband John Quick-Manning, to which she reportedly replied that the might but "the boy is in the way" while also suggesting that he wouldn't be a problem any longer. So when Charles was inevitably found dead, the parish official immediately reported Cotton to the police.

After an examination of Charles' body "revealed traces of arsenic", Cotton was arrested and was eventually "found guilty of the murder of Charles Edward and was sentenced to death." According to the Radio Times, Cotton maintained her innocence throughout her trial, sentencing, and was even defiant during the hanging. "Mrs Cotton, who scowled fiercely and with an air of defiance at the crowd, and who muttered constantly but indistinctly, took her place upon the drop with remarkable composure... the wretched woman was launched into eternity," a journalist wrote at the time.

While Cotton may have been tried — and convicted — of the murder of her stepson, it's estimated that she killed 21 people, with biographer David Wilson setting the tally at 17. As ChronicleLive reports, it's believed that Cotton began her killing spree at age 20 when she married labourer William Mowbray. He died in 1865 of an intestinal disorder, of which Cotton received a sizeable sum of money through an insurance payout.

The same happened a year later with her second husband (who also died of "intestinal problems"), and it would eventually be discovered that Cotton was poisoning her partners (and their children) with arsenic so that she could reportedly collect money upon their death. As ChronicleLive explains, her poison of choice was tasteless, and mimicked the symptoms of "common medical conditions such as gastroenteritis or dysentery".

Often referred to as Britain's first serial killer, Cotton preceded two other female killers as historical author Linda Stratmann explained to the Telegraph in 2016. "Mary Ann Cotton may have been the most prolific poisoner of the period but she wasn't unique. Betty Eccles, suspected of several murders by arsenic, was hanged in 1843," she said. "Sarah Chesham murdered four people. She was executed in 1851. In the middle of the century there was even a panic, somewhat whipped up by the press, that there was an epidemic of poisoning."

Even though Cotton may not have been Britain's first female serial killer per se, it doesn't take away from the heinous crimes she committed and the fascination still attached to them.