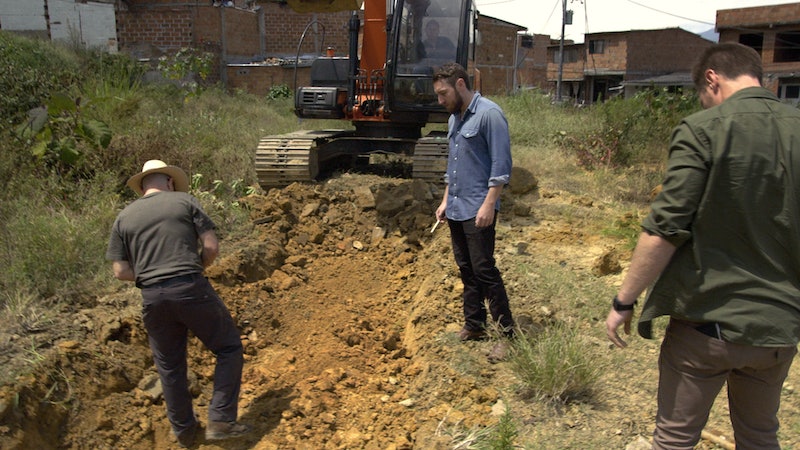 Between Narcos and American Made, there's a TV/movie obsession with the life and death of the Columbian drug kingpin Pablo Escobar happening right now. Discovery's new series Finding Escobar's Millions suggests that the kingpin's money may still be hidden somewhere near his hometown of Mendellin, Columbia. But has Pablo Escobar's money ever been found? While you'll have to watch the new show to find their conclusions, there's been no confirmation of where Escobar's fortune is — or even a confirmation that he even really did bury millions in cash. The theory that Pablo Escobar's fortune is still out there, buried or hidden near one of his homes, stems from his brother Roberto de Jesus Garavis Escobar's book The Accountant's Story: Inside the Violent World of the Medellín Cartel.

In the book, Roberto wrote, "The biggest headache was hiding the money ... I created the system of caletas, small hiding places in the walls of houses and apartments ... there could be as much as $5 million in cash hidden in a single caleta." And, spurring the rumors of a missing fortune, Roberto wrote, "On different farms we buried money in plastic garbage cans that nobody knew about." On Finding Escobar's Millions, former CIA officers Doug Laux and Ben Smith are heading down to Columbia to investigate Roberto's claims and, according to Discovery, "Scour Colombia for clues Escobar left behind" in hopes of finding the truth behind the legends.

And Laux and Smith are not alone in being fascinated by the Escobar fortune. Turns out, this is a theory that's obsessed many people before, especially ones who are a little bit connected to Escobar in some way. When Chicken Kitchen CEO Christian de Berdouare purchased a home in Miami formerly owned by Escobar in 2014, according to The Daily Mail, he had it checked thoroughly to make sure that there was no "cash, could be gold, could be jewelry, could be dead bodies" hidden in the home before he demolished it in order to rebuild a new house on the land. And while he was reportedly hoping to find "hidden treasure" in the walls or buried in the backyard, according to The Daily Mail, nothing too interesting turned up.

However, when de Berdouare began demolishing the home, according to The Miami Herald, he did find something intriguing: an enormous safe buried behind a wall. "This is real. It’s still locked. It’s very, very heavy. We can’t believe it — now Pablito is my best friend," de Berdouare reportedly said in response to the discovery. This could be the clearest confirmation of Roberto Escobar's accounts of his brother's penchant for hiding large sums of cash — though an enormous safe isn't quite as exciting as burying millions on local farms. The safe is unopened, and according to the January 2016 Miami Herald article, "The safe ... will be placed in a bank vault, where it will stay until the property owners decide to unlock it. They plan to open it after they finish Valoppi’s documentary on the history of the mansion."

The idea of finding Escobar's missing funds have even captured the imagination of the Internet. In 2015, a story about a farmer allegedly finding $600,000 worth of cash in Columbia made the rounds on a few sites which, The Latin Correspondent reported, was likely fabricated. There was never any confirmation by a farmer or the Colombian government on the story, and this certainly would have become huge international news if true. It's also worth noting that in Roberto Escobar's book, he doesn't ever allege that he and his brother buried sums of money that large in a single caleta. "When we surrendered and went to prison," Roberto wrote, "We buried more than $10 million in plastic cans" in the prison as well. That's a considerable amount of cash, but certainly not comparable to the six hundred million alleged by the online hoax.

The legend of Pablo Escobar's hidden money is a mix between allegations from a former associate and accountant, real evidence that Escobar kept valuables hidden, at least around his homes, and, as you might expect, rumors that greatly exaggerate the former drug dealer's fortune. Finding Escobar's Millions will have to see if it can find both the money and the truth behind the story.