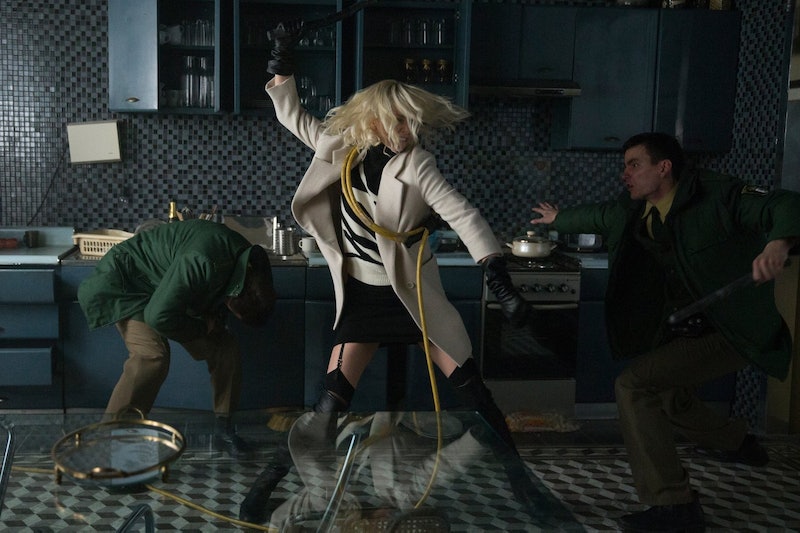 Despite this year already unveiling big budget action films like The Fate of the Furious, Wonder Woman, and Guardians of the Galaxy: Volume 2, the best action film of 2017 might be the comparatively under-the-radar Atomic Blonde. The Charlize Theron-led spy movie may not have the budget of the previously mentioned films, but it certainly packs in just as many thrills, including an insane staircase fight scene that looks like it was filmed in one continuous take. But in actuality, was the Atomic Blonde staircase fight scene one shot?

The scene in question is a real jaw-dropper, an eight minute fight scene that takes place in a stairwell and sees Theron's character, Lorraine Broughton, exchange blows with a number of big European bad guys, fighting her way through every last one of them in bruising fashion. And the reason the insane scene looks like it was shot in one continuous take is because it was — for the most part. Director David Leitch, who previously co-directed John Wick and knows a thing or two about staging fight scenes, had been wanting to do the scene for a while, but it wasn't until he saw how well Theron was progressing in her intense training for the role that he became convinced it could be pulled off.

"I'm getting the remote videos from L.A. on how she's doing every day, and I made a call back to my stunt team and I'm like, 'Guys, I think we can do this 'oner' we've always talked about,'" Leitch told Business Insider's Jason Guerrasio. "When I pitched it to her we were already a couple of weeks into shooting and I walked into the makeup trailer and I was like, 'I didn't want to tell you this before because I didn't want to freak you out, but that stairwell fight, I'm planning to make it all one shot.' And she's like, 'Ah, what?' I said, 'There will be some tricks and some movie magic, but it's going to be hard work and a lot of long takes.' And she was like, 'Has it been done before?' And I said, 'Not like this.' And she said, 'Let's do it.'"

Leitch revealed that there are actually a couple of hidden cuts within the scene, so the full eight-minute fight seen on screen isn't technically one long shot. However, it was essentially filmed as such with Theron performing all the choreographed moves as if it were, and it still consists of tracking shots that extraordinarily long, giving it the appearance of one long shot.

Even if the entire scene wasn't technically done in one shot, it's still a massive achievement for both Leitch and Theron, and it's undoubtedly the best action scene in a movie so far this year.