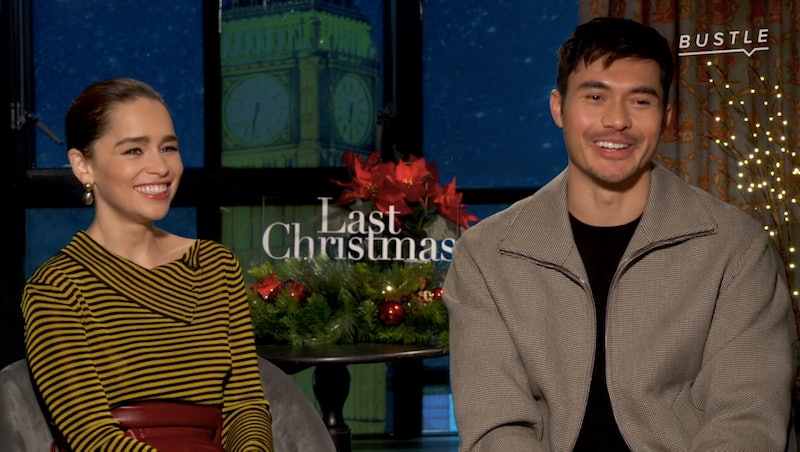 Would you rather trade homes with someone who owns a cozy English cottage or a Los Angeles mansion? Be left blissfully alone for a week in your own home or at the Plaza Hotel in New York? Listen to that iconic, plaintive melody from A Charlie Brown Christmas over and over again or Billy Mack's Christmas #1, "Christmas Is All Around"? When it comes to these holiday movie "would you rather" questions, the Last Christmas cast and director aren't waffling at all.

At the New York City junket for Last Christmas (out Nov. 8), Bustle challenged the stars of the film and their director Paul Feig to tackle some Christmas movie-themed conundrums based on favorites like Elf, Love Actually, The Holiday, Home Alone, Last Christmas itself, and more. Fortunately, they don't seem exhausted by the holiday yet, despite spending so much time celebrating it in the film. In Last Christmas Emilia Clarke's Kate works in a Christmas store owned by "Santa" (Michelle Yeoh) and who is dealing with some health issues and concerned family members. Henry Golding plays Tom, a man who is... extremely mysterious.

There are a lot of choices that the group agrees on, but, as in any game of "would you rather" some important distinctions are made. For instance, Golding would be down to stay at the Plaza Hotel, but he needs to know if Donald Trump is going to be around, as he is in Home Alone 2. Yeoh, meanwhile, immediately begins planning her stay at the iconic establishment: "I'd go to the spa. I'd have room service. I'd go to the gym. Oh, I could think of a million things to do."

When it comes to a question about their own film — whether they'd prefer a date that involved sneaking into an ice skating rink or walking around London to view the Christmas lights, both of which Kate and Tom do in Last Christmas — not everyone was on the same page. Namely, Clarke sounds completely done with ice skating. Forever.

You'll have to catch Last Christmas when it hits theaters this Friday to see how that skating date pans out and find out exactly what's going on with Tom. For now, get in the holiday spirit ahead of time by watching the video above and deciding which character from The Holiday you'd rather swap houses with.

More like this
At 28, Rosie Perez Risked Her Career To Stop Playing Stereotypes
By Gabrielle Bondi
'That '90s Show' Star Callie Haverda Got Advice From Mila Kunis & Ashton Kutcher
By Brad Witter
Keyla Monterroso Mejia Is Finally The Star Of The Show
By Gabrielle Bondi
At 28, Debra Jo Rupp Was Living A Much Different '70s Show
By Grace Wehniainen
Get Even More From Bustle — Sign Up For The Newsletter
From hair trends to relationship advice, our daily newsletter has everything you need to sound like a person who’s on TikTok, even if you aren’t.