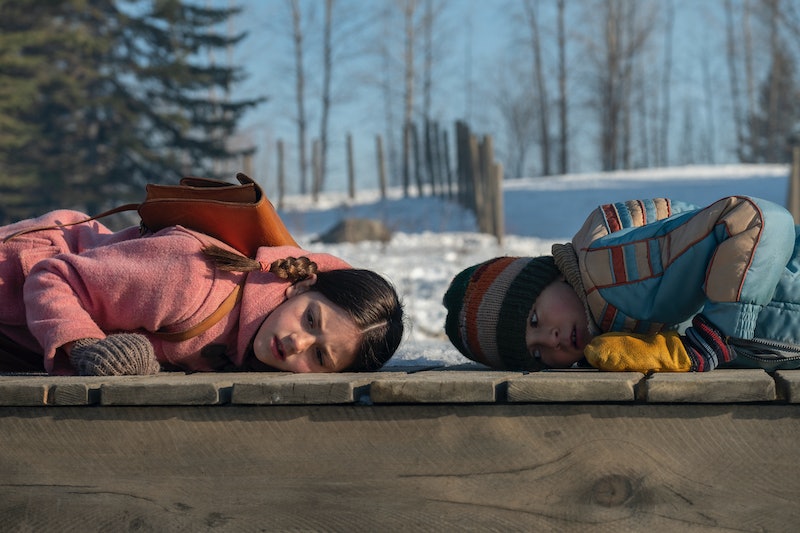 All of the characters in Amazon's Tales from the Loop are bonded by the titular Loop, a giant particle accelerator underground a small Ohio town. Its existence causes a number of strange occurrences in the community: objects float, snow floats up instead of down, people meet alternate universe versions of themselves. Because the show is based on a book of paintings by Swedish artist Simon Stålenhag — with every episode inspired by one painting — each story largely stands on its own. "Different characters step up [each episode] to take center stage," showrunner Nathanial Halpern told Screen Rant. "You kind of get your resolution every hour."

But it's not a traditional anthology series. "The structure is somewhat unique in that it's a serialized show but each episode feels self-contained like a film," Halpern told Gizmodo. "It's almost a collection of short stories, a portrait of a town and people who live there."

That means that rather than skipping around to the most compelling stories, like you might with Black Mirror, you should still watch the Tales from the Loop episodes in order. "It is designed to be watched in order. If you saw episode four, there's something in there about an individual where, if you didn't see episode two, you are missing," Halpern explained to Vanity Fair. "I mean, you can watch any of them and not be lost, but there is an added layer of fulfillment if you go in order."

Halpern added that the show begins in "harsh winter" and carries on into "the green of summer," so there's an evolution you miss if you don't watch the episodes back to back. Black Mirror showrunners Charlie Brooker and Annabel Jones also tend to suggest watching their episodes in order, but it sounds like there's more to lose with Tales from the Loop if you don't follow those directions.

More like this
'The Rings Of Power' Episode 5 May See The Realms Brought Together
By Kadin Burnett
Nazanin Boniadi Was A Healer Long Before 'The Rings Of Power'
By Olivia-Anne Cleary
UK Viewers Will Have To Wait To Watch The Handmaid’s Tale S5
By Maxine Harrison
Mike Flanagan Teases 'The Midnight Club' In This Exclusive, Creepy Clip
By Grace Wehniainen
Get Even More From Bustle — Sign Up For The Newsletter