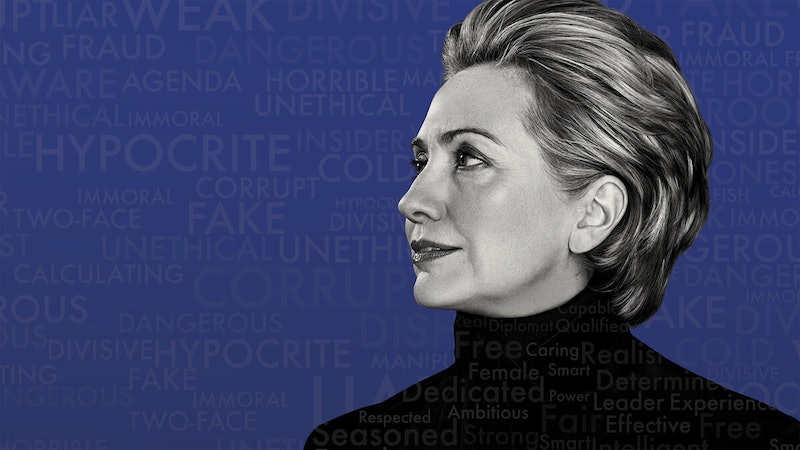 Hillary Clinton is no longer in the business of convincing you to like her. For the first time since the 1970s — when her husband was elected governor of Arkansas — there's no race to be won or lost. Hulu's new four-part docuseries, Hillary, tells her story the way she sees it, not how the American voter can best receive it. Detractors will deride the series for being guarded, one-sided, dishonest. Which is to say, they'll make the same comments they've always made about Hillary Clinton.

But for women who supported her candidacy in the 2016 general election, for those who remember where they were sitting when they watched Clinton concede, Hillary is a potent form of time travel. It didn't remind me what happened on the morning of Nov. 10 because most of the details I haven't yet forgotten: her shiny purple lapels, how she widened her eyes against tears. Instead, Hillary reminded me how that morning felt. Like many others, I woke up bereft. In the immediate aftermath of the election, the loss felt like something more, or maybe less, than politics. I wasn't yet running through the list of regressive policies that would harm so many vulnerable groups. I was sad because America is especially unfair to women. That Clinton, an experienced public servant, couldn't beat Donald Trump, a former reality star who'd said his fame gave him permission to grope women, made me feel like America might always be more unfair to women just when I'd come this close to feeling otherwise.

Hillary, directed and deftly edited from thousands of hours of campaign footage by Nanette Burstein (The Kid Stays in the Picture), doesn't re-litigate the 2016 election. In the two-plus years since she released her 2017 memoir What Happened, Clinton hasn't come to any new understanding of how and why she lost. It was October surprise after October surprise. It was Russian interference. It was James Comey. Perhaps it's veteran Clinton consultant Mandy Grunwald, throwing up her hands, who puts it best. "Anybody who has a theory about why we lost, they're right," she says on the show. Clinton was no more arrogant than anyone else who believed a candidate who'd made such disparaging public remarks about women and immigrants couldn't be president. She just staked more on the assumption.

But what Hillary does capture so effectively is how improbable Clinton's path to the nomination really was — how improbable any woman's path to the nomination would have to be. Asked if she dreamed of being president of the United States as a child, Clinton says, "It never crossed my mind." I was born almost 40 years after Clinton, and it never crossed mine either. As a kid, I remember thinking it was unfair that no woman had ever been president, but not thinking that I or anyone I knew could change that. It's the difference between suggesting possibility and cultivating it. There's no reason a woman can't be president, I'd been told, and yet it seems there's always a reason.

Among the documentary's insights is that Trump didn't single-handedly topple the powerful Clinton dynasty. The war on Hillary's character was attritional, starting in 1981 when Arkansas voters didn't like that their first lady kept her own last name. Voters also didn't like that she kept a full-time job outside of the home; that she stuck by her husband despite his affairs; or her real estate investments. They didn't even like the way she wore her hair. In the first episode of Hillary, Clinton talks about losing a student council election in high school only to be asked by the boy who won if she'd help him with the work. It's one of the reasons she cites for attending an all-women's college. I found myself thinking I'm With Her as Clinton used her 1969 graduation speech to rebut a local senator who decried the protest movement.

Fifty years later, the Democratic Party fielded the most diverse set of candidates in presidential primary history, including six women. On the day I sat down to watch the final episode of Hillary, the last remaining woman left the race. Despite historic electoral wins for female candidates in the 2018 midterms, we've now seen Senator Elizabeth Warren concede, after watching Senator Amy Klobuchar and Senator Kamala Harris and Senator Kirsten Gillibrand suspend their campaigns earlier than equally or less qualified male candidates. I wish I could have pressed pause on American politics where Hillary does, in the afterglow of the 2017 Women's March, when it still felt like we could cultivate our own possibilities.

More like this
Kim Kardashian Remembers Her Last Words To Death Row Victim Brandon Bernard
By Jake Viswanath
Cardi B Explains To David Letterman Why She Uses Her Star Power For Politics
By Jake Viswanath
The 'Hocus Pocus' Sequel Finally Has A Release Date & It Makes Total Sense
By Shannon Barbour and Radhika Menon
Sandra Bullock, Girlboss Extraordinaire
By Matt Harkins & Viviana Olen
Get Even More From Bustle — Sign Up For The Newsletter