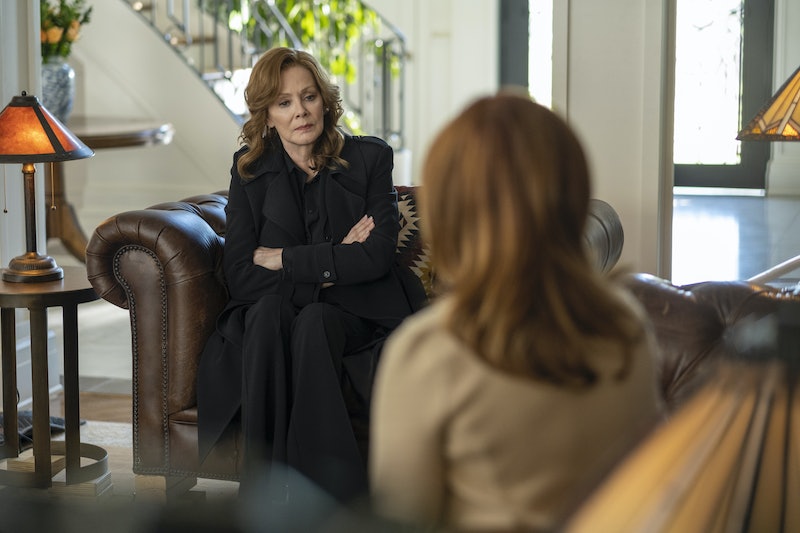 Spoilers for Watchmen Episode 7. As Watchmen hurtles into the final few episodes, we finally get some clarity on what the 7th Kavalry — aka Cyclops, aka the Ku Klux Klan — is up to, thanks to some good old-fashioned villain monologuing. While Cyclops used mind control and projectors in Will Reeves' time to fuel discord, they're now working with advanced Trieu tech to do something even more nefarious: Cyclops in Watchmen wants to kill Dr. Manhattan, and then they want to take his place.

The first major reveal of Episode 7 comes when Laurie goes to confront Jane Crawford, the wife of the deceased Chief Judd. She informs Jane that Will Reeves was Hooded Justice, and that Angela kept saying "Cyclops" while in her Nostalgia trance. Laurie says that she wouldn't be doing her due diligence if she didn't at least entertain the thought that maybe Judd was indeed a "secret white supremacist," and that his friends and family are too.

"What if the 7th Kavalry is just Cyclops by another name, and what if Senator Joe used them to kill a bunch of police so he could put all the cops in masks," Laurie theorizes to Jane. Since the 7th Kavalry also wear full Rorschach masks, Laurie points out that "no one can tell the good guys from the bad guys" and soon everyone will be "pledging loyalty to their newly elected leader, President Joe."

From her body language it's clear that Laurie didn't actually expect Jane to confess anything, but with almost no prompting Jane gives herself up (pretty proudly, it seems). "Well, that was the original idea," Jane says. "But something extraordinary happened, and suddenly President seemed a bit small potatoes." She then drops Laurie down a trap door shaft and calls (presumably) Joe Keene to ask if he wants Laurie dead.

We later see Laurie locked up in the same warehouse that Looking Glass was brought to, and she immediately notices the giant Cyclops painting on the wall and, more importantly, what looks like the barebones of a portal door and an Intrinsic Field Generator, the radioactive technology that turned Jon Osterman into Dr. Manhattan.

"You're wrong about Cyclops. We're not racists," he says to an exasperated Laurie. "We're about restoring balance in those times when our country forgets those principles on which it was founded. Because the scales have tipped way too far and it is extremely difficult to be a white man in America right now." He leans in to whisper, "So I'm thinking, I might try being a blue one."

So, sorry not sorry, Keene, you're firmly in the wrong here — we know it, and Laurie knows it too.

This clearly spooks Laurie, and for good reason — Dr. Manhattan can manipulate space and time, see the future, duplicate himself, and dissipate humans. Later in the episode it's Lady Trieu who actually confirms Keene's goal, but to Angela. "In less than an hour, they're going to capture Dr. Manhattan, and they're going to destroy him," Lady Trieu says. "And then they're going to become him. Can you imagine that kind of power in the hands of white supremacists?"

All in all, it's a shocking episode that confirms a few key theories. One, that the Crawfords and Senator Keene are actual racists, not just well-meaning interlopers who intervened to stop the white supremacists from hurting anyone, which is how they advertised themselves to both Looking Glass and Will Reeves at first. Keene's speech is particularly remarkable because he embodies the kind of well-dressed alt-right figurehead who treats the term "racist" as taboo, even when the thing he's talking about — that the default social order is white men on top — is unequivocally a racist belief.

As an educated, upper class white man, Keene likely knows what he's doing when he sidesteps accusations of racism by simply redefining it in different terms. After Donald Trump faced blowback for telling four American Congresswomen of color to "go back" to where they came from, for example, he called the accusations of racism towards him a "disgrace" that made "a mockery" of real racism. (Really, it's no surprise Watchmen Episode 6 made a Trump reference.)

"You actually end up protecting [racism] when you don't name it," Robin DiAngelo, author of White Fragility, told CNN, in a discussion of how terms like "racially charged" and "racial anxiety" have risen in popularity since Trump's election, a topic clearly on the Watchmen writers' minds. "That's one of its means of operation — to remain unnamed and unmarked."

Keene believes the "scales have tipped way too far" likely thanks to President Redford giving out reparations ("Redfordations") and to society generally progressing to the point where white women and people of color can now have the same degrees and jobs as white men. Keene and Cyclops see this rise towards equality as oppression, willfully misunderstanding what institutionalized racism is in the process — yet another marker of the alt-right. So, sorry not sorry, Keene, you're firmly in the wrong here — we know it, and Laurie knows it too.

Second, this episode confirms the theory that Dr. Manhattan has always been Cyclops' aim. I wrote here in the past about how Cyclops most likely views Redford's presidency as a stolen election, and they would probably do anything to reverse all the liberal laws he passed. When Jane says "something extraordinary happened," she's likely talking about the creation of Dr. Manhattan.

While many earlier theories guessed that the 7th Kavalry wanted to teleport Adrian Veidt back to Earth to make him answer for his crimes, now we know their plan is much worse. Keene and the other white supremacists feel so persecuted that they believe the only way to regain their status as rightful heirs to the country — and the world — is to become genetically superhuman. It's like the fantastical end result of the "master race" concept that began with Hitler. In a Peteypedia letter from David Keene to Judd Crawford, Keene describes Cyclops as "Achaians coming from Troy, beaten off our true course," like it is their god-given destiny to eventually rule everything.

It's a terrifying proposition that could have tremendously bad consequences for many people in Watchmen. At this point it seems like everyone's final hope may just be Lady Trieu and her mysterious Millennium Clock — finger's crossed she knows what she's doing.