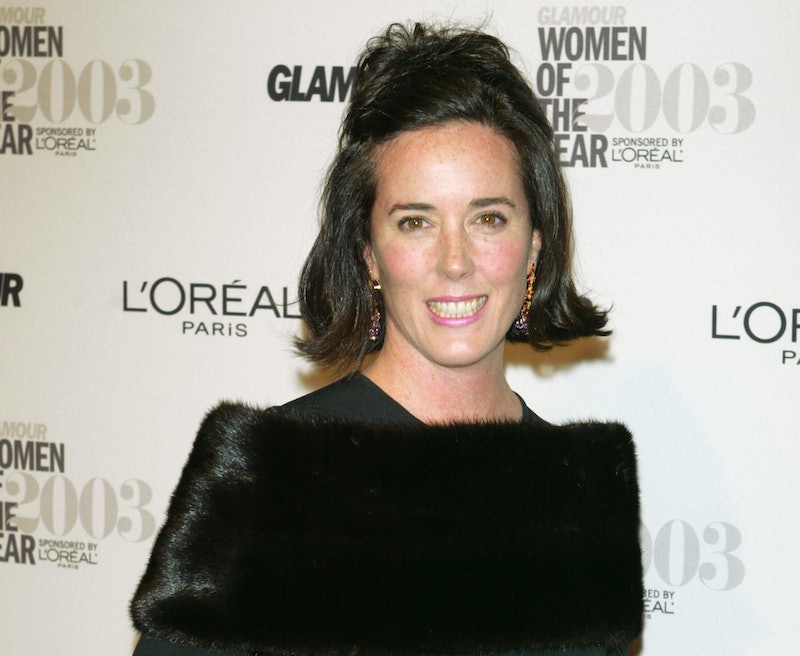 When Kate Spade died Tuesday at age 55, it wasn't just tragic in the way that all untimely deaths are tragic — for many, it seemed to cut deeper. Many people took to social media to credit Kate Spade's merchandise with helping them gain confidence early in their careers. Others expressed shock, as if Kate Spade the brand — a brand that felt like the very essence of whimsy and happiness, incarnated as a wallet or a day planner — and Kate Spade the person were interchangeable. But of course, this was not the case: Kate Spade could be seen by the world as the very embodiment of happiness while still being at risk for mental illness, because anyone, no matter how successful or privileged, can be at risk for mental illness. And everyone, no matter their advantages in life, needs to know they can ask for help, at any time, for any reason, or for no reason.

Spade's husband, Andy Spade, gave a statement to The New York Times confirming that the designer was being treated for depression and anxiety at the time of her death. "She was actively seeking help and working closely with her doctors to treat her disease, one that takes far too many lives," Andy Spade's statement read. Bustle has reached out to Kate Spade's media relations team for comment, and we will update this story when we receive a response.

No matter what Spade was experiencing internally, our public shock at Spade's death exposes some of the unconscious bias we have toward people with mental illnesses. Mental illness doesn't discriminate, but when public figures who we assume live happy lives die by suicide, it can come as a shock to those of us who only know them by their images, since we can't personally see the warning signs of suicide risk. Robin Williams made funny movies, so how could he be depressed? Kate Spade sold bright, cheery clothing, so how could she struggle? To be clear, this kind of thinking can be incredibly dangerous — anyone can experience the highs and lows of life, and present an image of themselves that reflects only one side of that experience. But even for people who appear happy, there are almost always signs of mental health struggles that the people close to them can watch for.

Spade had the resources to access mental health treatment from a financial standpoint — Forbes reported in 2017 that she had a net worth of nearly $50 million — and her husband's statement confirmed that she was actively seeking treatment. But there are often many different barriers people experience — including fear of stigma — that prevent them from seeking help in the first place, or being able to fully utilize the resources they do have available. It's something I've experienced first-hand: During a psychiatric hospitalization after a major depressive episode, a nurse asked me what I had to be sad about. I had parents that loved me, she said, and a husband who visited every day. She asked me plainly, "Why are you depressed?" I had no answer for her. But the thing is, you don't need an answer to that question for your feelings to be valid, or for you to receive care.

Not everyone who has mental illness appears to struggle externally, but for those who are close to the person living with mental illness, there are warning signs that loved ones can use to help the person living with mental illness receive treatment. According to the National Alliance on Mental Illness, excessive changes in mood, trouble sleeping, irritability, disordered substance use, and other symptoms can be signs that someone in your life may need help with their mental health — and these are all signs that can develop regardless of how successful or put-together someone appears. It's possible to have a seemingly "perfect" life and still experience mental illness, just like it's possible to have a perfect life and still deal with physical illness.

According to statistics from the American Foundation for Suicide Prevention, about 122 people also died by suicide in the U.S. Tuesday, and nearly 45 thousand Americans die by suicide per year. Erasing mental health stigma doesn't simply mean making care accessible financially, although that's one crucial element. Beyond that, we need to make it so that anyone can be open about a need for treatment and support without fearing judgment from the world around them. Kate Spade made her fortune from a brand that extols the value of carefree fun, even as she herself may have been suffering. Everyone needs to understand that anyone can reach out for support, at any time, no matter how good they think they have it, or how cheerful they seem on the outside, or for any other reason. Please, please, please, ask for help.