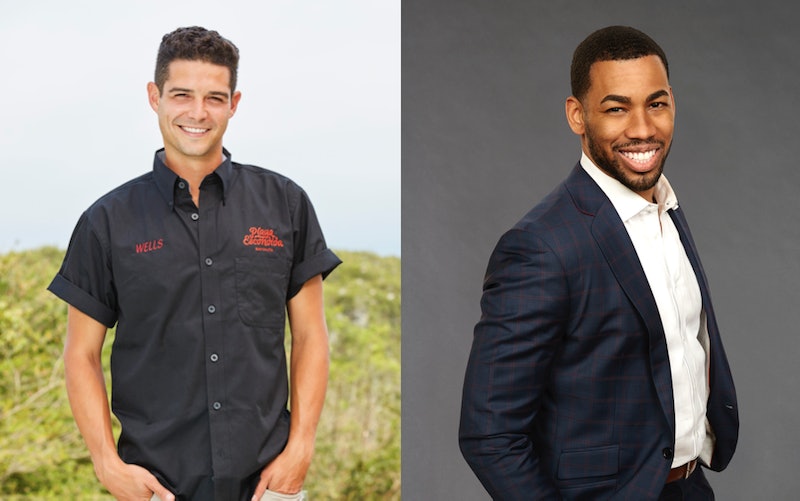 There are a few strong contenders for who could become the next Bachelor, however, Bachelor in Paradise's resident bartender, Wells Adams, has a few thoughts on who it shouldn't be and it has the potential to many diehard Bach fans shout out in protest. During a recent interview with Entertainment Tonight, Wells explained why Mike Johnson isn't ready to be Bachelor, in his opinion, despite the fact that he's proven to be a standout guy and a fan favorite from Hannah B.'s season of The Bachelorette.

Of course, that's not to say that Wells thinks his friend should never be Bachelor. He knows Mike is a great guy and certainly deserves to find true love. "For Mike, I don't really know," Wells told ET when asked about Mike's Bachelor chances. "I think he would be a great Bachelor. He's got a million-watt smile, he's tall as a house. And he's a veteran." However, he isn't sure Mike is quite there yet to be able to serve as the star attraction to the ABC reality series. "Nothing but mad respect for him," Wells continued. "[But] I think what people fail to grasp is you have to build a show around that person, and I don't know if he's ready for it, just in terms of the spotlight being on him that much."

So what makes Wells feel that to be the case? "The only reason I say that is because when you watch back, he's just not on the show a lot," he added, referencing his time on Bachelor in Paradise Season 6.

In truth, he's not entirely wrong in that regard. Mike has certainly been underutilized throughout the course of his time in Mexico. His budding relationship with Sydney is barely shown and there are only a few times he's seen talking to fellow BiP members about their own feelings and romantic drama. Could this be a subtle hint that the Bachelor producers don't think Mike is ready to spearhead the show?

"When you hear the producers are leaning toward one or the other, they'd be a good 'lead' or whatever, I think that what they're saying is you have to remember, yes, everyone deserves love and it would be so great if everyone could do it on this nationally televised show, but who is going to be able to, like, handle [it] all," Wells explained during the same interview. "There's a lot of pressures that go on around it, and I wonder if they're like, 'He's great, but he's not ready for that quite yet.'"

So who does Wells think has what it takes to fill those rose-clad shoes? "I'm rooting for Derek because, like, can the kid catch a break? That's kind of my thought on it," he said, adding:

"And also, I thought the way that he handled the Demi thing was — I say this honestly, I don't know if there's anyone from Bachelor Nation that would have been able to do what he did as well as he did. We're all selfish beings, and if we're getting hurt, like, I think we'd inevitably get angry, and Derek had the wherewithal to step back and be like, 'Whoa, OK, hold on. This is big.'"

Wells continued, "If that's not, like, Bachelor [material], then I don't know what is." Whether he's right or not remains to be seen, but in the meantime, let's not lose all hope for Big Mike and his amazing dimples just yet.